Borderline by TA Chase is a book about secrets, a vicious killer, and two strong men falling in love. I received a copy of this book at no charge in exchange for my honest review.  Read on for more information about the story, an excerpt, a contest and a few notes from the author!

Note from the Author: Thank you for having me here at Nautical Star Books today. I’d like to chat a little about my newest release, Borderline. It’s a re-release actually, but I hope you will still love Tanner and Mac. 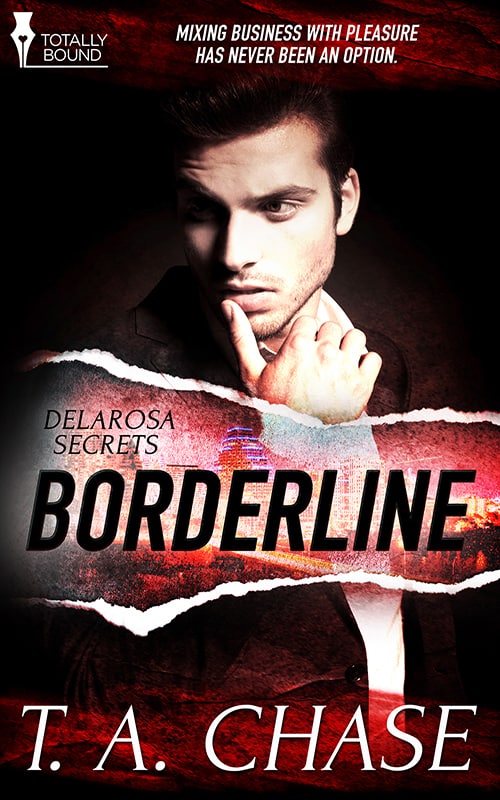 The Delarosa Secrets trilogy is about three brothers…one who doesn’t even know he’s a brother until he meets Tanner. Each of them has secrets that they would prefer not to reveal, and collectively, they have one large secret that could destroy their lives.

In this first book, both Tanner and Mac have a secret they’re reluctant to talk about. Mac doesn’t want to say anything because it could get him taken off the case they’re working on.

Now we all have a secret or two that we’ve kept hidden for most of our lives. Some are ones we’ll never tell anyone because they’re hurtful or damaging in some way—whether to ourselves or the person we’re hiding it from.

Other times, our secrets aren’t any more destructive than the fact that we don’t our significant other’s pancakes, but because they make them for us with love, we eat them anyway. Not harmful or destructive in any way. Just a little white lie we tell for the one we love.

Yet Tanner’s secret is way bigger than not liking someone’s pancakes. It’s one that could get him in trouble with his employer and might get him arrested as well. But when he meets Mac and begins to fall in love, he has to admit that he can’t keep it for much longer. At some point, he’ll either have to tell or Mac will find out.

In addition to the distractions they’re facing in their personal lives, Tanner and Mac are hunting a serial killer preying on the women of Houston. There seems to be a lot going against these two guys to make any kind of relationship work, but I think you’ll discover that both of them are stubborn and far tougher than they seem.

Thanks for having me here and I thought I’d share a little excerpt from Borderline with you.

MacLaughlin waved them into his office. “So you’re looking for some help on that serial killer case I’ve been hearing about.”

“Please, call me Sam. And you are?” Sam shot a glance at Macario.

“Ranger Macario Guzman. I’m the lead on the murders.” He shook Sam’s hand.

“Nice to meet you. Sit. Would either of you like some coffee? What can we do to help you out?”

Macario sat, but didn’t say anything. Going to the FBI was his boss’s idea and he wasn’t about to take over.

“Yes. We’ll both take some. It’s been a helluva four months, Sam. Four women killed by the same guy. Sliced almost beyond recognition. We were hoping one of your profilers could take a look at the pictures and information we’ve gathered at the crime scenes. Just in case our guys missed something.”

Sam stared off into the distance before blinking and giving a nod. He picked up the phone and pushed a button.

“Hey, Tanner, come in here and bring two cups of coffee with you.” Sam listened for a moment. “I know you’re busy. Just get in here.”

After hanging up, Sam leaned back in his chair. “We’ll wait until Tanner gets here before you tell me anymore about the case.”

Billingsley accepted Sam’s suggestion. “I see the DEA’s got a hot tip about Delarosa.”

“Won’t matter. I doubt the man’s wherever they think he is. He’s as slippery as a snake.”

Macario agreed with the agent. The Delarosa cartel ran a majority of the drugs out of Texas. His supply came through Mexico and his business was booming. No matter how much police and other law enforcement thought they knew, no one was able to pin anything on Victor Delarosa, the head of the empire.

“Enough to make you yank out your hair or become an alcoholic out of frustration.” Sam grimaced in disgust.

This is book one in the Delarosa Secrets series, see the full series listing here

Surrounded by secrets, two men search for a serial killer, while trying to keep it from becoming personal.

Mac Guzman is a Texas Ranger and lead detective on a serial killer case rocking the city of Houston. He’s willing to take help from anyone, especially when it comes in the form of the gorgeous FBI profiler, Tanner Wallace. Mixing business with pleasure has never been an option for Mac, but he just might change his mind and seduce Tanner into his bed.

Tanner Wallace joined the Bureau and became a profiler to catch bad guys. Also, it might have a little to do with making up for the evil caused by his family’s business. When he’s called in to consult on a serial killer case in Houston, Tanner never expects to meet Mac. The handsome Texas Ranger brings to mind hot, sweaty nights wrapped in each other’s arms, yet Tanner knows Mac would walk away if he ever found out who Tanner’s family really is.

With the threat of another murder hanging over their heads, Tanner and Mac will have to find a way to work past their differences before the killer strikes again.

Publisher’s Note: This book was previously released by another publisher. It has been revised and re-edited for release with Totally Bound Publishing.

Borderline by TA Chase was honestly an amazing read.  Crime fiction has always fascinated me and the author really does a great job of getting inside the actual solving of the case.  While the relationship and back story of the characters are both important, the author doesn’t skip over the mystery itself in this book.

Tanner is a profiler for the FBI and a very good one at that.  He really gets inside the heads of the killers he is studying, which messes with his own psyche quite  a bit.  He knows that his career as a profiler won’t last too much longer if he wants to retain any amount of sanity.  His latest case with the Texas Rangers has him physchoanalyzing a serial killer and getting way too involved with the Ranger in charge.

Mac is a Texas Ranger trying to find a serial killer before he kills again.  Unfortunately, one of the killer’s victims is someone Mac knows personally and that puts even more pressure on him to solve this case.  Getting involved with a co worker wasn’t really in his plans but he and Tanner can’t seem to help falling into bed together.

The secret that Tanner is keeping from Mac keep him constantly on edge.  Mac is not exactly an open book sort of guy himself.  Between the stress of catching a killer, hiding secrets, and a developing relationship, this book definitely had me turning page after page quite quickly!

I really loved the bits of the book that were told in the killers point of view.  It was fascinating to hear his mental meanders and get a glimpse into what was inside his head.  You could HEAR the arrogance in his thoughts…and then hear Tanner’s profile of him discussing how arrogant this killer is.   It was a nice touch that added to the importance of the crime itself in this story line.

I really felt bad for Mac and his pretty crappy childhood.  Being a kid in the foster system really just emphasized that people leave and don’t bother getting attached.  He was the type of character that was all gruff and strong and independent but who you just felt the need to hug. Thankfully, Tanner was happy to do some cuddling with him…as well as a whole bunch of other things!

I liked Tanner’s ability to stay neutral when it came to his family and his job, although I did find it a bit unrealistic.  I’m not sure the FBI wouldn’t have uncovered such an unsavory family history, nor am I too sure that a cartel boss would care about WHO he exploited in his life of crime.  But, while it may have been a touch unrealistic, it was well written and I actually liked Victor and Perez’s characters as well.

Overall, Borderline by TA Chase was a great read that I read in one day because it really just grabbed me from the very first chapter! 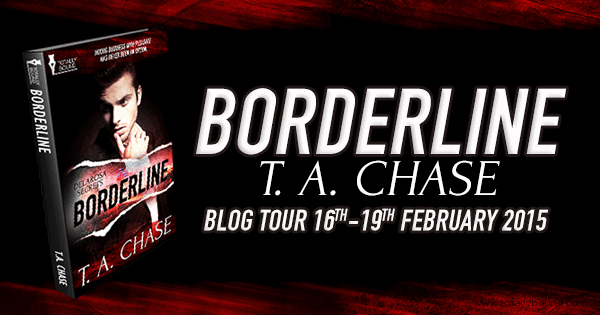 There is beauty in every kind of love, so why not live a life without boundaries? Experiencing everything the world offers fascinates TA and writing about the things that make each of us unique is how she shares those insights. When not writing, TA’s watching movies, reading and living life to the fullest.

Enter Totally Bound’s February blog competition for a chance to win an eBook of your choice!