Lovers Entwined by Lillian Francis is an incredibly moving love story intertwined with glimpses of the past.  I received one copy of this book at no charge to facilitate my review but all opinions expressed here are my own.  This post contains affiliate links. 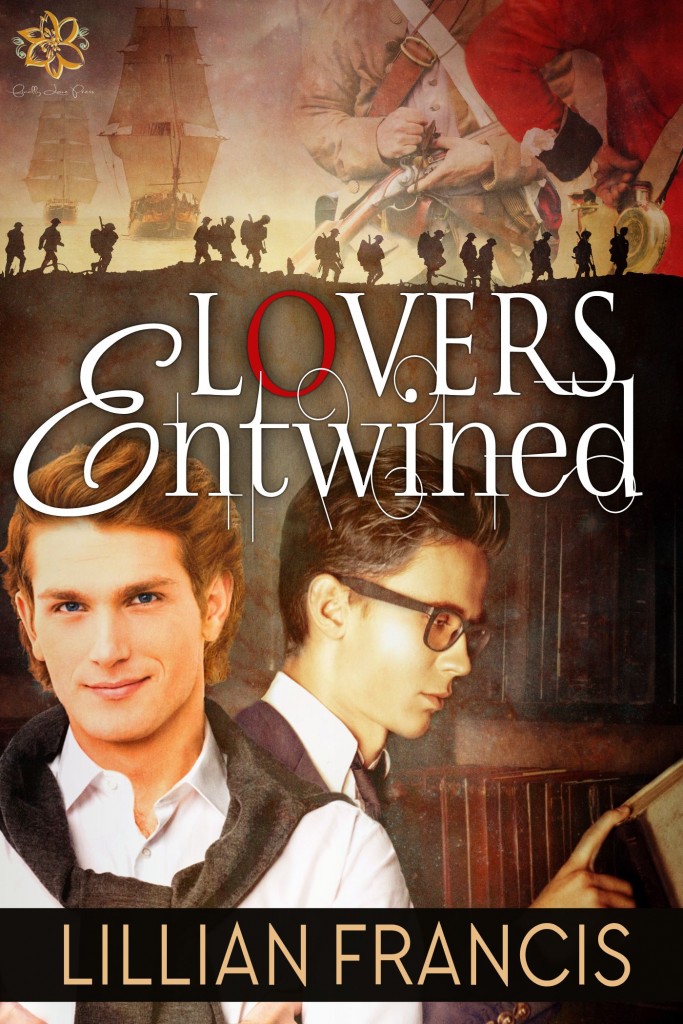 Ewan Matthews is one of Boston’s leading genealogy experts. When a would-be bridegroom comes looking for confirmation that there are no skeletons in his ancestral closet, Ewan considers turning the job down. Trey Capell is a jerk of the highest order and yet Ewan experiences an infuriating attraction that’s easy to justify. Trey’s exactly his type—a carbon copy of the man Ewan’s been looking for his entire life.
Harder to explain is the sense of recognition that leaves Ewan speechless the moment Trey steps into his office. Or the stomach-churning sensation at the thought of casting the job aside.
Trey gets more appealing by the day, leaving Ewan struggling with forbidden desire for his client. Desire not helped by strange voyeuristic dreams that have started to haunt his sleep. Dreams that appear to be an echo of the past.

Lovers Entwined by Lillian Francis is truly an exceptional book.  I was drawn in right from the beginning and honestly would have been happy to keep reading even if the author had made it twice as long!

Trey is getting married to a politically connected young woman.  While he is ready to jump in with both feet, Paige insists on a bit of caution.  Wouldn’t want to marry into a family with skeletons in it’s closet, right?  She insists that Trey have some genealogical research done to make sure there are no hidden secrets in his family history.

Ewen is a genealogist who is a far cry from the old and stuffy historian that Paige thinks she has hired.  Trey is intrigued and offers his assistance doing a bit of family research.  He has always been open to a little fun with either gender but for the last 4 years has been happily attached to Paige. His time spent doing research with Ewen has him a bit confused and he starts questioning everything he has come to believe in the last few years.

Ewen has never encountered a family history project that has effected him quite like Trey’s has.  He gets drawn into the stories from the past, complete with dreams, visions, and a feeling that he and Trey were destined to find one another.

A few notes as I read Lovers Entwined by Lillian Francis:

At first, it seems like Paige and Trey’s relationship was perfect but you soon come to realize that she really isn’t particularly nice, nor is she interested in Trey for who he really is.   There were times I thought Trey came across as a bit of a spineless sap…I wanted to slap him for letting Paige treat him the way she did. I also didn’t really understand WHY he felt he needed to stay with her.  The author hints that his relationship with his deceased father left him with certain expectations of himself but I wanted to know more.

I am glad that the author focused more on the history and the emotional connection that Trey and Ewen create rather than anything overtly physical until very close to the end.  I don’t care for books that involve cheating and while, yes…they did finally get together before things were officially done with Paige, Trey knew in his heart that they were over and he made it known to Paige soon after.

I liked the immediate conflict between Ewen and Trey.  No love at first sight for these boys…oh NO!  They got off to a rocky start that had it’s ups and downs but soon settled into the research and the history that was coming alive right before their eyes.

I found the genealogy fascinating but not overwhelming.  You immediately get tidbits of flashbacks as Ewen delves into Trey’s history.  Those flashbacks become several independent stories within the main romance book and I found them all fascinating.  At times I wanted more of Trey and Ewen’s relationship to see how things blossomed between them.  Of course, there were times I wanted more of the historical stories to find out how THOSE couples turned out.  I honestly think Lovers Entwined could have been twice as long and I would have kept reading it.  But, since it was already 270 pages, that is probably a bit unrealistic!

I did find myself frustrated during much of Lovers Entwined that Ewen didn’t confide in Trey about the dreams and visions he was having.  Clearly, their family histories have been connected for hundreds of years but he kept that quiet and drove himself quite mad by the end of the book.  When he finally confides in Trey, the outcome was beautiful and quite touching.

Honestly, I could not put this book down and there were tears in my eyes during alot of it.  Reading about the historical characters was incredibly moving.  Seeing glimpses of these couples and learning how they were all entwined together was beautiful.

And, let me just say the the Epilogue of Lovers Entwined was creative and made me smile.  So happy that they got a happily ever after!