In Hotline by Quinn Anderson, Zack never intended to become a phone sex operator.  He also never thought it would lead to falling in love. I received one copy of this book at no charge in exchange for my honest reviews but all opinions expressed here are my own.  This post contains affiliate links. 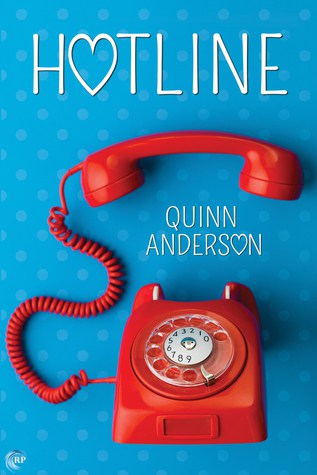 Zack never intended to become a phone sex operator, but with half a college degree and a smart mouth, his options were limited. It helps that he has a knack for thinking on his feet and a willingness to roll with whatever his clients throw at him. Sure, he gets his fair share of creeps and unconventional requests, but it pays the bills, and he’s in no danger of breaking his one rule: never fall for a client.

Until a man named “John” starts calling, and Zack finds himself interested in more than a paycheck. It’s not just that John has money, or that his rumbling baritone drives Zack wild. He’s everything Zack isn’t: educated, poised, and in total control of his life.

A twist of fate brings them face-to-face, and now that they’ve seen each other—and spent an unforgettable night together—they can’t go back to the way things were. A sex worker and a trust fund brat . . . It’s like Romeo and Juliet, but with less stabbing and slightly fewer dick jokes. Hopefully they can pull off a more successful ending.

Hotline by Quinn Anderson is incredibly well written.  This is  a new author for me but the writing is solid, the characters well developed and the story was engaging.  The author created some great secondary characters as well and most of the book I really enjoyed.  I had a couple story line issues that I will get to in a minute.

I loved Zack but he also frustrated the living daylights out of me.  He is a great character, well written as a slightly lost college dropout who is making his way but definitely not on solid ground.  He is a great friend and great dog daddy to his shepherd Ziggy (a very nice touch!) and a relatively decent guy.  He is nice to his family even though they drive him nuts.  His job as a phone sex operator isn’t really going anywhere but it pays the bills.

John you don’t really get to know until you get into the book a bit.  For the first half of the book he is just a voice on the other end of the phone.  But, once you get to know him he is fairly decent.  A very well off law student who comes from family money and who has a bit of a kink for phone sex.

Their connection in person is just as intense as on the phone when they accidentally bump into each other in a club.

Okay, so…without giving away any spoilers,  Zack is NOT supposed to be seeing a client in person.  His boss is suspicious.  Zack is honestly the stupidest individual known to man.  He knows his job is in jeopardy.  He has NO other means of support if he loses that job.  And you want me to believe he isn’t out there looking for something else so he can keep a roof ever his head? That is the part that I found hard to believe.  No one can be that dumb.

The other thing that really bugged me was the drama scene….they have a fight.  Things seemed very over the top and dramatic and John said some really crappy things to Zack that seemed out of character for him.  They just didn’t seem to fit with the guy I spent half the book reading about.

But, I give Hotline by Quinn Anderson a 4 because it was incredibly well written and I genuinely loved the characters and the story line, even though there were a couple of things that bugged me.  The heat between these two guys is incredibly intense both on the phone and in person.

Zack and John do get their happily ever after, you just have to make it through some drama before they get there.