Only One Month by Hallie Deighton is a slow burn Australian romance between two very different kinds of men. One month is all it takes to fall in love!  I received one copy of this book at no charge in exchange for my honest reviews but all opinions expressed here are my own.  This post contains affiliate links.

Only One Month by Hallie Deighton 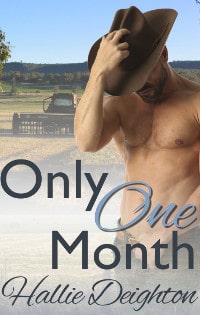 Title:  Only One Month

About the Author:  Learn more about Hallie Deighton  by checking out the author’s website or following along on Twitter.

Only One Month Blurb:

Aussie farmer Rob McIntyre keeps his private life strictly private. His sex life is confined to brief escapes to the city and he’s all but given up hope of ever having a romantic relationship here in the small farming community of June Valley. That is until city boy, Luke Wallis, comes to stay.

Rob has never been more tempted. But there’s no way he’ll risk his love life becoming the talk of the district and no way he’s going to risk his heart… no matter how much he finds himself falling for Luke.

That’s if Luke’s even into men… and Rob’s not about to ask. Rob’s just going to have to keep his attraction, and his hands, to himself until Luke’s gone. After all… it’s only one month.

Only One Month Review:

In Only One Month by Hallie Deighton, Rob is an Aussie farmer who is definitely NOT out.  He doesn’t think that being gay would go over well in his small farming community and he can’t risk the ranch on something as inconsequential as his love life. He enjoys occasional trysts far from home but that is as far as he is willing to go for his sex life.  His well-meaning sister arranges for city boy Luke to stay with him for one month while he works on his research.  Luke is into guys but without knowing Rob’s orientation, he is hesitant to let that be known.  Who knows if the guy is a closet homophobe, right?

While I enjoyed Only One Month, I will say that it dragged on a LONG time before the characters finally got together.  This is a relatively long story and by 50% they were still trying to tiptoe around each other just to see if the other one is gay.  While I liked the writing style and the characters were very well developed, I was starting to get impatient with them.  Actually, I really was most impatient with Rob who seemed just a little too insecure in my mind.  I also felt that I got to know Rob much more than I did Luke and I would have liked to get more into his head than I did.

Overall, though,  Only One Month by Hallie Deighton is a pretty good story.  It is well written and the author does a great job at portraying the emotional side of each of these characters.  Having been hurt in the past with attempts at long distance relationships, Rob is hesitant to try again and get his heart broken one more time.  Luke seems like more of a happy go lucky sort of guy but seems to fall hard for Rob during his stay.

The setting is amazing and the author does a wonderful job of presenting the reader with an Aussie farm where you can smell the dust and practically feel the solitude. I loved Luke’s job testing the water nearby active fracking sites (an environmental issue I am passionate about).  I actually would have liked to see more of his actual work weaved into the story.

I will say that I liked that the ending wasn’t perfect.  There were no magical solutions to their problems but they found a happily ever after eventually with a bit of work.  The last few chapters of the story are actually the main characters, having finally fallen in love, trying to work out their happily ever after.

I really enjoyed  Only One Month by Hallie Deighton, however, I think it needed to be a bit shorter with the main characters acknowledging their attraction a little earlier.  And a little less of Rob’s angst would have made him much less annoying.