Acting Out by Scotty Cade is a sexy and well written love story between two men who are learning how unimportant gender really is.  I received a copy of this book at no charge from the author in exchange for my honest review.

Acting Out by Scotty Cade 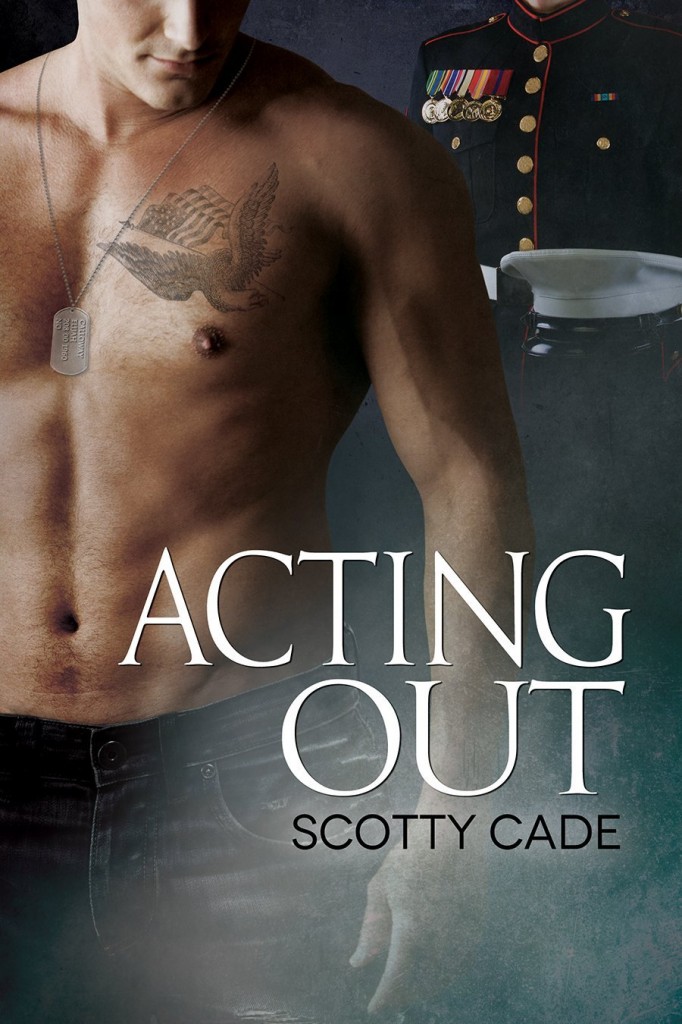 After one very long tour of duty in Afghanistan and an honorable discharge from the USMC, Elijah Preston comes home to nothing. He barely scrapes up enough money for a cheap motel in Quantico, Virginia, with no money-making opportunities in sight. A chance encounter in a local Walmart finally gives Eli hope for employment. Elijah is ready to sign on with Royce Mackey’s proposition… until he hears what’s required. Royce operates a gay military porn site and wants Eli as his next star, never mind that Eli isn’t gay. Desperate and broke, Eli grudgingly accepts Royce’s offer and soon finds himself immersed in a strange new world.

Hamish Turner’s been there before. Taking Eli under his wing, he teaches him everything he can about Royce’s operation. The two quickly become friends, easing the way for their first scene together. Awkward at first, they both ease into it and find there is more of a connection between them than either expected. Curious to see where their mutual attraction takes them, they begin a relationship off-screen. But life gets complicated when a crazed fan of Hamish’s starts sending threatening letters demanding the scenes between the two men stop. Or else….

We start out meeting Eli who has recently left the military with an honorable discharge.  Due to some really rotten circumstances (mainly his greedy parents!) he is left with nothing but his last paycheck and a degree he can’t find a use for.  He is living in the cheapest motel he can find and trying hard to find a way to support himself with no luck.  And then he meets Royce.

Hamish was once in the exact same position as Eli and understands the struggles he is going through.  He takes Eli under his wing, shows him the ropes and they become good friends.  Eli is drawn to Hamish and the heat between them is intense.  That passion gives way to deeper feelings which causes Eli to freak out a bit. When a crazed stalker threatens to kill him, Eli realizes that gender is of little importance when faced with losing the love of your life.

The one thing that I have always loved about Scotty Cade’s books is how well he creates that depth of feeling between the two main characters.  There is no doubt they are in love, even if Eli has trouble admitting it at first.

The characters in Acting Out are all very well written, even the secondary characters.  You learn a bit of their back story and get a feel for their personalities.  I would definitely like to see Royce’s gay for pay group featured in another story!

The drama at the end with Hamish’s stalker gave the book a bit of non sex based excitement.  I definitely never suspected who the culprit turned out to be.  I would have liked to see this part of the book drawn out a bit more.  It seemed a bit too quick for my liking but it was well written and it cemented Hamish’s importance in Eli’s mind.

If you are looking for a well written gay romance with tons of heat and a military twist I think you will definitely enjoy Acting Out!