In Adulting 101 by Lisa Henry, Nick isn’t ready to grow up.  Growing up means college and career choices and responsibility.  He has things he wants to do before he grows up.  Like corner the sexy construction worker in the porto-potty! I received one copy of this book at no charge in exchange for my honest reviews but all opinions expressed here are my own.  This post contains affiliate links. 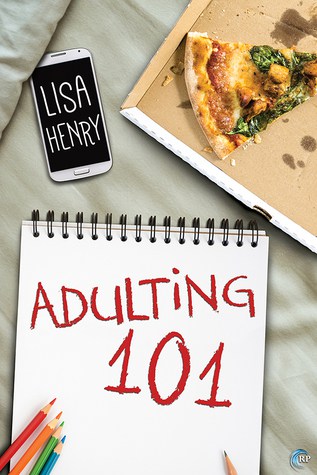 Nick Stahlnecker is eighteen and not ready to grow up yet. He has a summer job, a case of existential panic, and a hopeless crush on the unattainable Jai Hazenbrook. Except how do you know that your coworker’s unattainable unless you ask to blow him in the porta-potty?

That’s probably not what Dad meant when he said Nick should act more like an adult.

Twenty-five-year-old Jai is back in his hometown of Franklin, Ohio, just long enough to earn the money to get the hell out again. His long-term goal of seeing more of the world is worth the short-term pain of living in his mother’s basement, but only barely.

Meeting Nick doesn’t fit in with Jai’s plans at all, but, as Jai soon learns, you don’t have to travel halfway around the world to have the adventure of a lifetime.

This is not a summer romance. This is a summer friendship-with-benefits. It’s got pizza with disgusting toppings, Netflix and chill, and accidental exhibitionism. That’s all. There are no feelings here. None. Shut up.

In Adulting 101 by Lisa Henry, Nick has just graduated high school and is getting ready to go to college.  Or rather, his mother is getting him ready for college because he wants nothing to do with that at all.  He doesn’t want to leave his best friend, he has no clue what he wants to do with his life and he is pretty sure his parents are wasting a lot of money on an education that he doesn’t want nor does he think he can achieve.  He is a bit of a hot mess, actually.

Nick is slightly spastic in a very amusing and adorable way.  He has no filter at all and tends to launch into verbal diarrhea at a moments notice.  He doesn’t think things through very well and makes some pretty questionable choices.

Jai is 25 and while he is significantly more mature than Nick, he has his own issues.  He was deeply impacted by the death of his father years earlier and is restless, always chasing a new dream in a new location.  He is only home for the summer to earn enough money to move on to the next journey.  He is pretty much accosted by Nick and while the decision to fool around in the porto potty wasn’t the smartest one, he finds that he rather enjoys Nick’s company.  He is amazingly calm about Nick’s chaos and seems to think his spontaneity is adorable.   You can really feel how much he needs to escape…he is torn between wanting to leave and getting more and more attached to Nick.

Adulting 101 is incredibly well written.  The author writes the book in a very light hearted tone but it manages to convey much deeper emotions than  you would think possible given the writing style.  I was chuckling by page three and then near tears by the end of the book.  Nick is every single young guy trying to get a little bit of action and survive the whole requirement of being an adult.  Except his issues are growing bigger and bigger and pretty soon he can’t handle them on his own.

Lisa Henry has created some great secondary characters as well.  I love Devon, Nick’s best friend and Nick’s parents are actually pretty great.  Yes, they are rather oblivious to Nick’s stress but they pretty much represent the average parental unit of most college age kids.

I really loved this story.  Nick and Jai are having fun…and getting caught in some compromising positions.  However, woven into the story are threads of emotional upheaval, stress over new responsibilities, and the complex relationship struggles between a young adult and their parents.

Overall, a wonderful story and one I highly recommend!