All Along by Willa Okat is book 5 in the Soulmarked series.  It is a short but sweet romance between two men who were shocked at what fate had in store for them.  I received a copy of this book from the publisher at no charge to facilitate my review but all opinions expressed here are my own.

All Along (Soulmarked #5) by Willa Okati 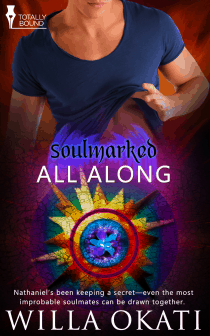 Nathaniel’s been keeping a secret—even the most improbable soulmates can be drawn together.

Nathaniel, youngest of the brothers, has been keeping a secret. He knows the identity of his soulmate, but he hasn’t told anyone—because it’s not just impossible, it’s improbable. No one has more than one soulmate in a lifetime, but his new mark has drawn him to Abram—a widower who had, and lost, his mate long ago. It cannot happen, and yet it has…and Nathaniel’s falling in love, fast.

Abram is charmed by the adorable amber-eyed man, but not fooled. Falling for Nathaniel would be a one-way ticket to Heartbreak Hotel. Abram’s twenty-five years older, and he’s had his time with his soulmate. He knows there are no second chances, but every time Nathaniel enters his life, he wins another piece of Abram’s heart. Even if Abram knows better, he’s beginning to wonder if dreams can come true.

Or if miracles might just have been real all along.

All Along is book #5 in the Soulmarked series but the only one I have read so far.  While I was in the dark about the secondary characters’ history and relationships, the actual story line between Abram and Nathaniel was clear and understandable without reading the other books.

Nathaniel wakes up one day and realizes that his soul mark has become visible….meaning he was close to finding his one true love.  He is thrilled but wants to keep it quiet so he doesn’t get alot of grief from his brothers.  They tend to meddle a bit too much and are a bit over protective.  It is understandable since they raised him after his parents’ deaths but just because he is young doesn’t mean he can’t take care of himself!

Abram lost his soulmate years ago.  He truly loved Callum and they had a wonderful life together that, unfortunately, was cut off far too soon. Since you only get one soulmate in life, he is dedicated to his job and his friends rather than finding another true love.  Imagine his surprise at learning the fates had a new plan in store for him!

Nathaniel and Abrams’ family and friends run in the same circles, which is how the two meet.  Nathaniel knows immediately that Abram is his soul mate but is rather shocked to learn that he might be wrong.  Abram just thinks his attraction and obsession with Nathaniel are due to his lack of a love life since Callum died.  No matter what the fates might be thinking, the physical draw is just too much for them to deny.

This is a rather short story but very well written.  The words practically flowed off the page.  Descriptive enough to draw an amazingly clear picture in my head but not so flowery that it became difficult to read.  Nathaniel is young but has a remarkable maturity.  Abram is hesitant to get involved with someone so much younger than him but they fit like two pieces to a puzzle.

I adored how the author wove Callum into the storyline.  A glaring look from a photo, a snarky remark in Abram’s head, and a slightly possessed DVD player.  Not so much ‘ghost’ as a ‘snarky message from the past’.

If I could change one thing about All Along I would ask for MORE. I would have loved to see Nathaniel and Abram’s relationship progress and watch them get to know each other.  But, I always hate when a good book ends, no matter how long it was!  All Along is a short novella  but makes for a very enjoyable read!