All Bite, No Growl by Jenika Snow is a short and steamy novella.  Devon and Chase have claimed each other as mates but they will not be complete without Willow.  Now, all they have to do is convince HER!  I received a copy of this book at no charge in exchange for my honest review.  All opinions are my own and this post contains affiliate links.

All Bite, No Growl

All Bite, No Growl by Jenika Snow

Purchase Links: Available at ARe and Amazon 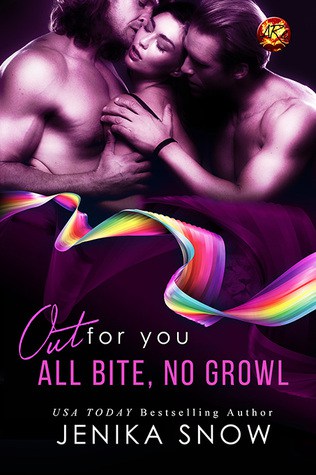 Forget the foreplay. For the truly committed, it’s all bite.

Willow has loved Devon and Case for as long as she can remember, but as lion shifters they will eventually find their mates. When she allows herself to be with her two lions after a drunken party, she fears she’s ruined a lifelong friendship and flees before morning.

Devon and Case have been inseparable since they could walk, but they can’t tell anyone that they are mates. The pride of shifters they belong to won’t accept a same-sex mating. There’s no way they’ll accept their love for Willow?

When a shocking revelation brings Willow’s world crashing down, she has no choice but to tell Devon and Case how she feels. Will they be able to accept what fate has thrown at them? Do they want to? 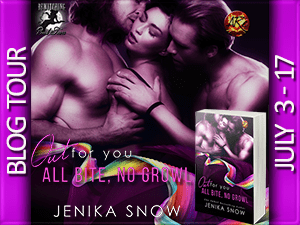 In All Bite, No Growl by Jenika Snow, we find Case and Devon mated to one another but not ‘out’ to the rest of the pride.  Lion shifters are not open to males being mated to each other so they are keeping quiet for now.  Willow is a female lion shifter and their best friend.  She is not particularly confident in herself which gets her in a bit of trouble at a party.  Case and Devon come to her rescue and that night leads them all to the bedroom together in a very steamy connection that will change all of their lives.

This book is short, sweet and very hot.  Willow is seriously lacking in any confidence at all but her friendship with Case and Devon is the most important thing in the world to her.  Case and Devon are incredibly sexy and are very protective of Willow.  It is clear that these three have a very close relationship, although given how short the book is, we aren’t really given much time to learn their back story or really get emotionally involved with any of them.  I will say, I think I would have preferred them to be a bit older….just out of high school seems juts a bit too young for the steamy sex scenes and overt confidence these two guys have.

The three lion shifters are incredibly hot together and the sex scenes are pretty intense.  There is definitely an emotional bond between them which makes things even steamier.  It was a nice, quick read but I think I would have liked the story a bit longer.  Really giving the reader time to get to know these characters would have really made this book amazing.

Case let go of Willow’s shoulder and poured them all another shot. He wanted to get out of here, wanted to be alone with his mate and the female he cared about more than anything else in the world. He stared at Willow, took in her long brown hair that curled at the ends, the color of her amber eyes, and her innocent expression. She was so damn pretty, but she didn’t think she was, didn’t see herself as anything more than chubby and ugly no matter how many times they told her the opposite. Willow was smart, quiet, and timid, and so unlike the other lionesses in their pride, but she was theirs, had been part of their lives for as long as they could remember.

He loved her more than just as a friend, and he’d spoken about those feelings with Devon. It hadn’t been a surprise when his mate had said the same thing. But it wasn’t smart or fair to be with her as anything more than friends. She’d find a mate one day, and if they were physical with her, a lot of emotions would get sticky in the mix. It was better if they kept things platonic even if it was hard as hell.

He watched his mate throw back the shot, took in the strong six-foot-six height of his mate, the long black hair that fell over his forehead, and the light green eyes. His mate was a gorgeous bastard, but it pained him to keep their connection from others. He wanted to shout it loud and proud, but it wasn’t safe or smart to do so, not until everyone was more accepting of two males mating. As it was he didn’t know what would happen to them, or how they would be treated if they came out now.

Case had always liked males, had always jerked off to thinking of their hard bodies, long cocks. But he loved women too, loved the soft curves, soft voices. He couldn’t lie and say he hadn’t thought about being with another male throughout his life, about how muscle against muscle would feel, but they had only been thoughts, up until he’d been seventeen and seen Devon as his mate. He just wanted to let go, be who and what he wanted to be, and not worry how it would affect the pride, or who would care. But that wasn’t reality. What he knew for damn sure was he wanted to fucking take Devon and Willow, even if she wasn’t his mate by bond, hard and fast, get lost in them, and fuck up anyone who told him it was wrong.

His thoughts were interrupted when Willow tossed back the shot. She was not acting like her reserved self right now, but she was drunk. He’d only ever seen her like this on a couple other occasions, and it always made her more outgoing, less hidden.

She leaned in close so only he could hear her say, “Case, I think maybe I had way too much to drink.” She leaned against him and he held her close, looking over her head at Devon. His mate looked worried.

“Let’s get you home, sweetheart.

“No, my parents will kill me. Can I stay at your place?” She pulled back. “My parents won’t care. They loved you too, and I know your parents are gone for the weekend.”

He smiled and pushed a stray piece of hair off her forehead. “Yeah, sweetheart. I wouldn’t want you to be alone anyway.”

He led them out of the party, Devon behind, his anger still tangible. Case wanted to comfort Devon, because even if he was enraged, someone wanted to take advantage of their Willow. Now was not the time.

Jenika Snow is the pseudonym of a mother, wife and nurse. She lives in the too hot northeast with her husband and their two daughters, and was able to have her dream come true in 2013 by writing full-time.

Jenika started writing at a very young age. Her first story consisted of a young girl who traveled to an exotic island and found a magical doll. That story has long since disappeared, but others have taken its place.

For more information on other books by Jenika, visit her official website: www.JenikaSnow.com

Enter to win 2 eBooks from ARe Books imprints (Out For You, Bad Boys, Perfect Strangers, Alpha), reader’s choice