Baked Fresh by Annabeth Albert is a sweet romance between two men who have not so perfect pasts.  Their flaws (both inside and outside) make them skittish but love just sneaks up on them anyhow!  I received one copy of this book through Net Galley in exchange for my honest review.  All opinions expressed here are my own. This post contains affiliate links. 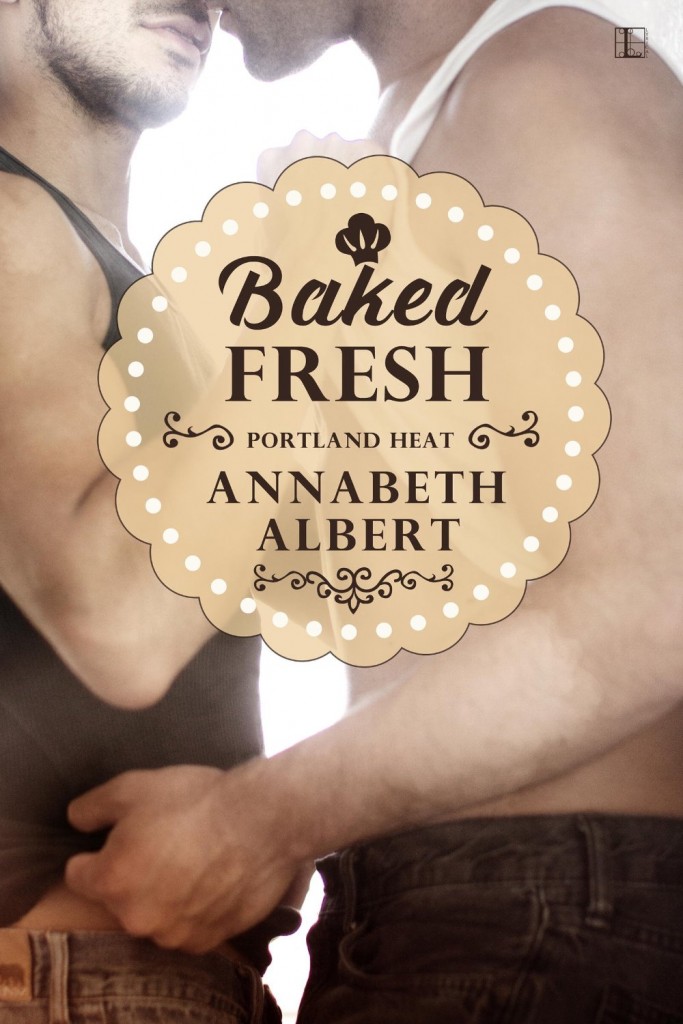 From its famous coffee to the mouthwatering fare at its cafés, restaurants, and bakeries, Portland, Oregon, has a lot to whet the appetite, including the hard-working men who serve it all up—hot, fresh, and ready to go—with no reservations…

Vic Degrassi is a baker on the rise, and it’s all thanks to his rare ability to make—and keep—his New Year’s resolutions. Whether it’s losing weight, giving up smoking, or graduating from culinary school, Vic goes after what he wants—and gets it. This year? He wants Robin Dawson, the sweet-hearted hottie who volunteers with him at the local homeless shelter. When he learns that Robin is suddenly single after being unceremoniously dumped, Vic is more than happy to offer a shoulder to cry on—or at least a fresh-baked pastry to bite into. But it’s been a long time since Vic’s gone on a date, and he’s nervous about risking his friendship with Robin. So when their flirtation turns into a steamy night together, Vic and Robin have to figure out if they’re friends with benefits or lovers in the making, and if Robin is ready for something more than just a rebound. There’s only one way to find out: turn up the heat…

Baked Fresh is the second book in Annabeth Albert’s Portland Heat series but can be read as a stand alone novel without any trouble at all.

Heart warming is the perfect summary for this book.  Vic is a baker who underwent bariatric surgery last year to help himself lose 100 pounds.  With several family members dieing suddenly of heart problems, he is scared into getting himself in shape.  Surgery, dieting, and a gym membership have given him a new body but it isn’t perfect and he is insecure about it.  He has had a crush on Robin for years but doesnt think anything will ever come of it.

Robin is a volunteer at the local homeless shelter and a recovered addict.  Recently dumped by his boyfriend, he has sworn off dating.  He and Vic are friends and he looks forward to Vic’s trips to the shelter to drop off day old baked goods for the homeless.  In an effort to get over his bad mood, he and Vic start hanging out just as friends…and then friends with benefits…and then some pesky emotions start getting in the way.

I loved Vic’s character.  He was still a big teddy bear, even having lost all the weight, and so very patient and protective of Robin.  Even though Vic had his own insecurities, his main focus was on taking care of Robin and being as good a friend as he could. He knew that if he pushed too hard, Robin would run.

Robin just couldn’t figure out why he managed to get clean and sober and turn his life around when so many others couldn’t.  He had this innate need to help each and every addict that walked in the doors of the homeless shelter.  He was generally a very caring and compassionate guy.

There is one blowup between our two main characters that I really thought didn’t fit their personalities quite right.  Vic’s jealousy and Robin’s subsequent verbal attack just seemed much more hostile than I would have thought possible between these two.

The main characters in Baked Fresh are not perfect.  The are self conscious, emotionally scared, physically imperfect and very REAL.  The author did a great job with the buildup of the relationship. I will definitely be reading more from this author!