In Base Instincts by Larissa Ione, Raze’s life as a Seminus demon revolves around sex with females. Too bad for Raze he is gay which means sex is little more than a chore.  Slake is an assassin and incredibly attracted to Raze.  But can anything be done about it? I received one copy of this book at no charge in exchange for my honest reviews but all opinions expressed here are my own.  This post contains affiliate links.

Base Instincts by Larissa Ione 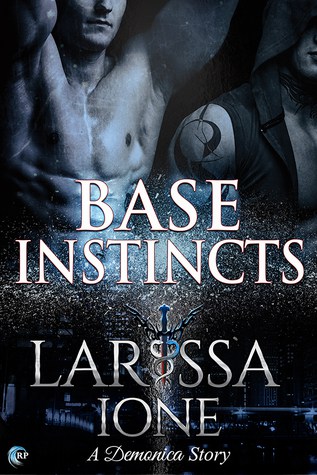 Series:   This title is part of the Demonica universe.

As a Seminus demon, Raze’s life literally depends on having sex with females. The problem is that he doesn’t desire females, and it’s physically impossible for him to be with males. Thankfully, he and his best friend, Fayle, have an arrangement that keeps him alive . . . if lonely. He finds some solace in his work as a medic at Thirst, a vampire club known for its rough clientele. But his carefully structured world turns upside down when he meets a mysterious male who makes him want what he can never have.

Slake is an assassin used to getting what he wants, and what he wants is Raze. But he also wants to earn back the soul he sold when he was a much different demon. All he has to do is capture a runaway succubus named Fayle and hand her over to her family. What he doesn’t count on is being caught himself by a web of lies—and his attraction to Raze.

Raze and Slake must navigate a dangerous world to be together. But as Fayle’s jealousy of their relationship turns deadly, they find themselves embroiled in a battle not only for their love, but their lives and souls.

When Base Instincts first starts out, Raze is working as a Medic at Thirst, a demon nightclub, and in the Underworld Hospital.  He is a healer and truly wants to care for those who need it.  He is a Seminus demon and requires sex with a female every 12 hours for survival.  Too bad he is gay…sex is little more than a chore.  He has an understanding with his friend Fayle (a succubus) that keeps him alive.

The world and characters that the author creates in Base Instinct are incredibly detailed and felt amazingly real. I was glad that there was a glossary at the beginning of the book, although most terms were explained as the story progressed.

I loved Raze.  Such a sweetheart although his trustworthy nature makes him open to being used.  When he and Raze first meet there is definitely physical attraction but I really wasn’t sure they actually liked each other.  There isn’t a hole lot of ‘romance’ between them. They are physically attracted to each other and there is a LOT going on to deal with.  When the dust finally settles they realize that they feel more than just a physical need for each other.

Slake comes off as a bit of an asshole but really he is just a victim of circumstance.  He is literally trying to save his soul and really doesn’t have much choice in his actions.

I really enjoyed how the author tied the demons history and biology into their relationship.  They should not have been able to be together physically but certain circumstances made their unique relationship possible. It was a creative way to solve their ‘mating’ problem!

I actually didn’t like how Fayle’s story ended.  Or at least the conclusion we got to see.  Yes, she was a miserable and annoying female but she did have her reasons for acting that way.  I wish things had turned out a bit happier for her.

At first, I was a little bit disappointed with how easy it was for Slake to get his soul back but, a little bit later in the story that issue is dealt with in greater detail.  I do think it should have been focused on in a little bit more detail, however.  It felt like a major issue that got settled way too fast.

Slake and Raze were sexy, unique, and genuinely nice guys considering they were demons. I loved the unique story line and the setting. I will definitely be looking for more by this author!