In Behr Facts by Pat Henshaw, Abe Behr has sacrificed romance all his life to build the family business. Likeable CPA Jeff Mason has him reconsidering his priorities. I received one copy of this book at no charge in exchange for my honest reviews but all opinions expressed here are my own.  This post contains affiliate links. 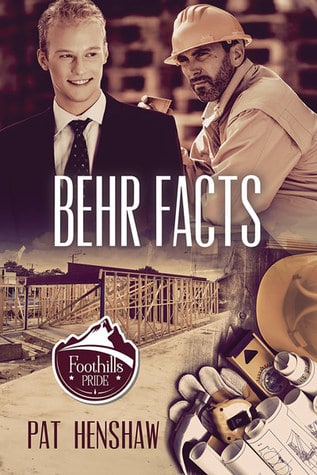 Big, burly CEO Abe Behr is dismayed to discover someone—possibly a family member—is stealing from Behr Construction, which primarily employs Behr relatives. Abe takes the unprecedented step of hiring an outsider, likeable CPA Jeff Mason, to go over the books and help find the culprit. They are drawn to each other as they talk to workers, including Abe’s two younger brothers and their shifty cousin.

Since he has sacrificed romance all his life to build the business, Abe’s surprised by his feelings for the handsome Jeff. He’s even more shocked when they are confronted by bigotry in the Sierra Nevada foothills community, which is being inundated by gays moving from the San Francisco area. As he and Jeff get closer, Abe must come to grips with coming out to a family and community that aren’t very tolerant. Fortunately, being the head Behr helps him find his footing and grab onto love when it bites him.

Abe is 32 yrs old and the oldest of four boys, one of who, died as a young boy.  His father was an alcoholic and died when Abe was 16.  That left Abe in charge of running the family construction company and raising his two younger brothers.  He has no time for a social life or romance of any sort.  He believes he is asexual and other than one brief attraction to another guy, he has no actual experience with sexual attraction.

Jeff is brought into the family construction company to figure out who is stealing from the company.  He is NOT family, which upsets all the extended family members who Abe currently employs.

There are three story lines going on in Behr Facts.  You have Abe’s interest in Jeff.  You have the mystery of who is stealing from the company.  And you have a town that is getting more and more hostile and homophobic and no one understands why.  I wasn’t wildly thrilled with how any of these story lines played out.

There is zero chemistry between Abe and Jeff.  Most of their interaction seems to be told and not show. (Like…they spent the weekend fishing but you don’t actually read about it) you go from Abe being asexual to him thinking he has feelings for Jeff to them waking up in bed after a night of sex that you didn’t actually read about.  They have one on page kiss and that is it for their chemistry.  I don’t need on page sex but I do need chemistry.  A heated glance, a pounding heart, something to indicate that theses people are attracted to each other.  I didn’t get that between Abe and Jeff.

The mystery of the stolen goods in Behr Facts was interesting and was a good premise for a story.  You get to briefly meet a lot of family members and towns people as they work through the mystery.  When the culprit is finally found, however, I didn’t really like the way it was handled.  Without giving away any spoilers, let’s just say the crook seemed like a total jerk with no remorse and then all of a sudden was crying and apologizing. It did not seem to fit with his character at all.

The homophobic and angry townsfolk issue was interesting and I would have liked a better look at what was causing this upheaval.  Behr Facts is book three of a series and the town upheaval is supposedly a continuing theme, although I didn’t read the first two of the series.  I might have understood it better had I read all three books.

I liked the premise of this story and the writing is solid but I just couldn’t get invested in these  characters as a couple.  I think all three story lines really needed to be expanded farther for Behr Facts to really work for me.