In Beyond the Sea by Keira Andrews, Troy and Brian learn that there is more to sexual attraction than gay or straight.  If they can survive life on a deserted island, certainly they can fall in love, right?

Beyond the Sea by Keira Andrews 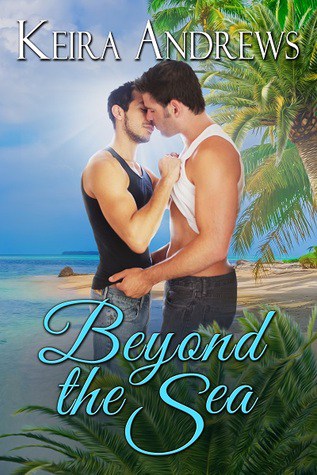 Title:   Beyond the Sea

Even if it means quitting their boy band mid-tour, Troy Tanner isn’t going to watch his little brother snort his future away after addiction destroyed their father. On a private jet taking him home from Australia, he and pilot Brian Sinclair soar above the vast South Pacific. Brian lost his passion for flying—and joy in life—after a traumatic crash, but now he and Troy must fight to survive when a cyclone strikes without warning.

Marooned a thousand miles from civilization, the turquoise water and white sand beach look like paradise. But although they can fish and make fire, the smallest infection or bacteria could be deadly. When the days turn into weeks with no sign of rescue, Troy and Brian grow closer, and friendship deepens into desire.

As they learn sexuality is about more than straight or gay and discover their true selves, the world they’ve built together is thrown into chaos. If Troy and Brian make it off the island, can their love endure?

I wasn’t sure what to expect from Beyond the Sea when I first picked it up but since Keira Andrews is one of my favorite authors, I had seriously high hopes.  And she delivered spectacular results!  My biggest fear was that the guys would just jump into the whole ‘sex on the beach’ thing before really getting to know each other.  I was pleasantly surprised at how slowly this book moved along, giving the characters and the story more than enough time to become fully developed.

Troy can no longer stand by and watch his little brother snort his life away with drugs.  They are in one of the most popular boy bands in the music industry but Troy walks away rather than enable him any longer.  He hires a private plane to take him home.  That plane is being piloted by Brian, who has a traumatic past that he is trying to forget all about.  Unfortunately for these guys, life is going to become even more traumatic in the near future.

Crashed on a deserted island, survival becomes their number one concern, however along the way their relationship begins to evolve.  Forced to lean on one another for emotional support, the physical feelings creep up on them.  Weeks drag by as they slowly fall more and more in love while growing skinnier and skinnier as well.  When rescuers finally arrive, they need to figure out whether their relationship can last in the real world.

Troy is young and has honestly never had to make an important decision in his life.  His dad and/or manager has always told him exactly what to do.  His relationship with Brian is a partnership, even when they are only friends.  No one is telling Troy what to do any more and he is forced to finally make some decisions on his own.

Brian doesn’t like to talk about his past but he finally breaks down and spills his emotional guts to Troy and you can just feel how relieved he is to lean on someone else for emotional support.  It’s that emotional connection that really draws these guys together.  Sure, any port in a storm when you are on a deserted island, right?  But this is so much more than just turning to another guy because they are convenient.  This story is about two guys who learn to survive together and develop an emotional bond with one another.  The physical stuff is secondary to them falling in love and learning to rely on that other person for survival.

The writing is truly beautiful and vivid.  I desperately want to see this incredible island, with its horrendous cliffs, thick vines and nasty biting creatures.  And what the heck was making that noise at night?  Not sure I would have survived on that island, myself!  The author does just as good a job with character building and I love that there is no extra drama between these two guys.  Survival is dramatic enough!

I can honestly say that I found the survival story just as fascinating as the romance.  But darn it, I wanted to learn how to make coconut oil from coconuts!  Seriously…watching them try to figure out how to cook their food, build a lean-to, and otherwise just live another day was really interesting.  And then getting to watch them go from complete strangers to friends to lovers to happily ever after was utterly satisfying.

Beyond the Sea by Kiera Andrews is going into my ‘read this one again soon’ pile!