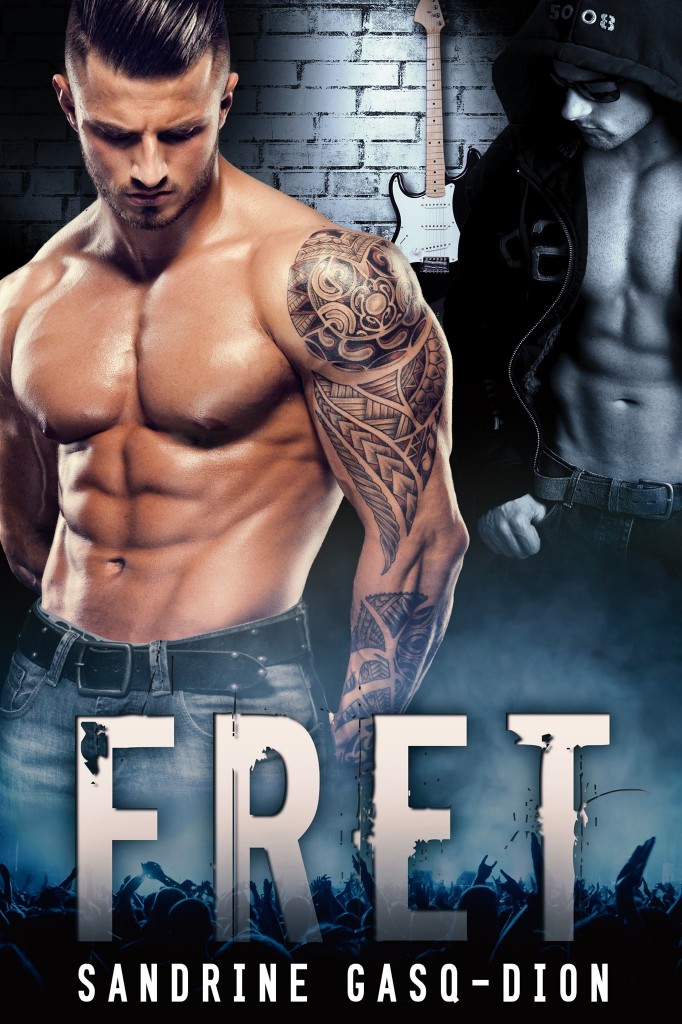 Blurb: Former Navy SEAL Axel Blaze lives a solitary life. He doesn’t do emotions, and he doesn’t do babysitting. Used to being on his own, his job consists of Wetwork (a charming term coined by the KGB) for his former Master Chief, Mac. When an out-of-the-ordinary job lands on his doorstep, Axel heads down a path that includes a famous heavy metal rock band and one quiet, vulnerable, guitar-shredding virtuoso named Gareth Wolf.

Gareth Wolf’s life changed in an instant when a car he was a passenger in crashed, hurting his brother’s best friend and the band’s lead guitarist. They created the band, Skull Blasters, as kids. Gareth had always been happy in the background, playing roadie. With the lead guitarist’s injury, Gareth is suddenly thrust into the limelight and into a frenzied life he never imagined for himself. Finally fed up with living a lie, Gareth comes out as gay in a newspaper interview and finds himself in the bulls-eye of a crazed stalker. Somebody wants Gareth hurt – or worse – and Mac has been hired to be sure that doesn’t happen. Babysitting duty is NOT Axel’s strong suit, but Mac won’t be budged.

Enter Axel Blaze. Against his better judgment, the big man takes the job to protect the shy musician. The more time he spends with Gareth Wolf, the more he admires the man. Where’s a simple assassination when you need one? The situation becomes more volatile for each man as the attempts on Gareth escalate just as Axel finds himself falling for the quiet lead guitarist.

Strong, funny, smart-ass — and kinda sweet Axel is everything Gareth has ever wanted in a man. Too bad he’s off limits. As the stalker grows bolder, Gareth and Axel move closer emotionally – but is it too late? All Axel knows is that they don’t stand a chance if he can’t find the maniac trying to kill the man he’s come to care about. A lot.

Everyone knows that relationships that begin in pressured or volatile situations eventually fizzle out.

Axel is an ex seal who is currently doing some freelance security work but being a baby sitter to a rock star isn’t his idea of fun.  He expected his client to be a rich, spoiled, childish pain in his ass but Garrett is nothing like what he expects.

Garrett regrets coming out as gay since apparently he has royally pissed off someone with his sexual orientation.  He doesn’t really want a baby sitter but he DOES want to continue living so he tries to do what he is told.  However, his body guard is the sexiest thing he has ever seen.

Fret starts out with the guys on stage.  The power and energy that these guys create through their music really jumps off the page at you.  The writing is gritty and a bit rough around the edges rather than flowery and sweet which totally fits the rock star/body guard story line.  The story is told from both Axel and Garrett’s points of view so you get an inside look at each characters thoughts and feelings.

I liked both characters in this story and you get a chance to reconnect with some of the characters from the authors’ previous books.  Garrett is level headed and slightly innocent despite his rock star status.  Axel is closed off but not cold.  He has never had feelings for someone but can’t deny what Garrett is making him feel.  You can really feel the draw between these two characters.

There were areas I thought the story line was a bit jumpy.  A few times I wasn’t quite prepared for a scene switch or twist in the story but overall, things flowed fairly well and the writing was well done. There is a bit of a plot twits at the end which isn’t a total shocker but it was well told and made sense based on the rest of the story.

The ending of the book is a nice combination of sweet romance and steamy heat and I was happy that these guys got their happily ever after.

Thumping music was shaking the walls of the Dome as I headed for my designated spot. I guess I’m meeting Paul, the band’s manager.

I took mental notes as I passed through the crowd of screaming, jumping people. The band was rocking it out and I sought out Gareth Wolf. There were two guitarists, but I found him right away. Black hair touched his shoulders and his lean body moved with his guitar.

He was in his element.

The song was wrapping up and the floor was shaking from the bass drum. The floor-to-ceiling speakers pumped out the last notes of the song. The crowd immediately went wild as Ransom Fox leaned over the stage.

“Let’s hear it for the best lead guitarist on the planet!” he shouted.

Gareth shook his hair back and bowed with one hand out. Again, the crowd screamed, shouted and whistled. Ransom went on to give some love to the other members of the group.

I rolled my eyes and pushed my way through the crowd toward the side of the stage. A large man eyed me and then nodded as I walked by. Again, I could have been wearing a ‘Hello, I’m God’ tag and security wouldn’t have batted an eyelash. As it was, my tag faced backwards; he couldn’t even see my name or credentials.

Security for the Skull Blaster band was sorely lacking.

I sat through another hour of bone-jarring hardcore metal before the band finally left the stage. I scanned the area for their manager, but no luck.

I walked right behind the curtain and fell into step with the band members as they trudged toward their dressing rooms. They didn’t even notice me — and I’m really hard to miss.

They stepped into the dressing room; I followed and slammed the door shut behind me. Ransom turned and his eyes widened.

“Nice of you to finally notice me,” I pointed out.

“Paul!” Ransom thundered. He immediately moved in front of Gareth, shielding him.

“Oh for fucks sake.” I arched a brow.

The door behind me opened and a startled man looked me over from head to toe. He flipped my name badge over and sighed audibly, clearly relieved.

“It’s cool, Ransom. This is the guy I was telling you about.”

“You could have mentioned he was a semi-truck.” Ransom’s eyes narrowed.

“I’m sorry I couldn’t meet you,” Paul apologized to me. “I ran into some media and couldn’t get away.”

“Not that this isn’t fun — because, oh so much fun — but I’m here to do a job. So I need to speak to whoever is in charge of ‘security.’ Now.” I leaned very slightly — but effectively — in to Paul’s face.

I turned to see Gareth peeking out from behind his brother’s broad shoulders. His eyes were a shade of green I’d never seen before, and with his pale complexion and dark hair? The guy was a looker and then some.

“Because band security royally sucks. I walked right on back here with them and not one person noticed or stopped me. That is not acceptable.”

“Who are you?” Gareth gaped.

I pinned him with a hard look. “I’m your bodyguard.”

“What the actual fuck?” Gareth stepped in front of his brother. “Is this a joke?”

“Jinx, Harley, Rebel. Give us a few, eh?” Paul opened the door and tilted his head toward the hallway.

“Sure thing, boss.” Rebel tipped his hat and winked at me.

I leaned against the wall as the members walked out. I overheard one of them, not sure which, talking to another.

“Did you see the size of that guy?”

“How could you miss him?” another one answered.

Paul shut the door and turned to Gareth with an apologetic smile.

“I knew what you’d say if we told you beforehand,” he admitted.

“Oh, did you now? You had to get me Conan the Destroyer? Jesus Christ!”

“What? This is stupid! I don’t need a human shield!”

“You’re going to play nice and allow this man to watch your back, Gareth!” Ransom shouted. “You’re getting threats since you came out! I insist you be kept safe!”

“Gareth, why don’t you go clean up? Then you and Mr. Blaze can get acquainted.”

I narrowed my eyes at the kid. Well, to me he was a kid, after everything I’d seen in my life. Gareth was almost twenty-three and I was pushing thirty. We locked eyes for a few seconds before he turned away.

Best-selling author, Sandrine (Sandy) was born in Inglewood, California. Raised by “Old School” French parents, she later moved to Tucson, AZ. It was there that writing became a hobby. Always told she had a great imagination, Sandy wrote short stories for her friends in High School. In college, she took more writing classes while working on her Criminal Justice degree, but it wasn’t until a soap opera caught her eye that she got involved in male on male romances. On the advice of a friend, Sandy dipped her toes into the world of M/M Romance. Sandy takes the writing seriously and has had countless conversations with gay men as well as hours of research. She’s been involved with the military in one way or another for over twenty years, and has a great deal of respect for our men in uniform. She’s traveled the world, but has finally returned to Arizona.

Fangirl Moments and My Two Cents

The Land of Make Believe