Gypsy’s Wolf is one story, written by 25 different authors.  Life never asked Quad or Gypsy what they wanted. It simply gave them what they needed, whether they agreed or not.  Continue reading for more information about the authors who contributed to this story and an inside look at the book itself! 100% of proceeds will be donated to charity! 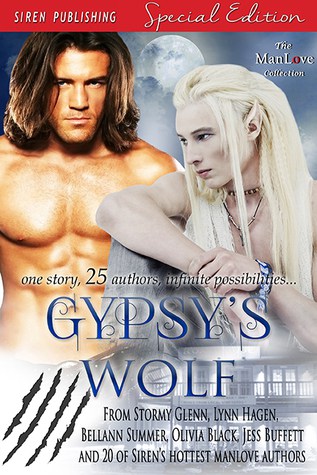 Quad McDaniel’s life changed forever the night he was attacked by a wolf. Now, he turns furry every full moon. Avoiding red meat and anything that makes him aggressive is his prime goal in life. But when his convertible breaks down in some Podunk town, becoming the beast within is no longer a choice. It’s instinctive.

Gypsy Govanivinch just wants to live a quiet life in Trinity Valley, running his roadhouse tavern. He doesn’t need an overly aggressive shifter coming into his town and messing with his peaceful little world, no matter how gorgeous the man looked.

Life never asked Quad or Gypsy what they wanted. It simply gave them what they needed, whether they agreed or not. Fate brought them together but it’s up to Quad and Gypsy to stay alive long enough to appreciate what they’ve been given. And when others work to prevent that, fighting together might be the only chance they have of surviving.

100% of proceeds will be donated to charity 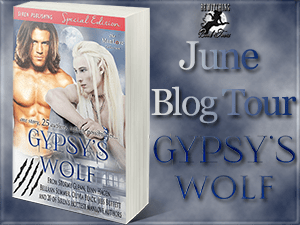 Quad McDaniel threw his cell phone into the passenger seat and banged his head repeatedly against the steering wheel of his black Mercedes SL600 Roadster convertible. He couldn’t believe that his brand new car had broken down. He had just bought the damn thing two days ago.

So much for the perfect car!

And now his cell phone wouldn’t get any reception. Could his day get any worse?

He climbed from his car, slamming the door closed hard behind him in frustration. Looking around, he couldn’t see much in the dark, except for some glowing lights off in the distance. Resigned to his fate, Quad locked the car door and began walking toward the light.

When he reached the parking lot, he gazed up at the tavern sign…GG’s Roadhouse. Well, damn, he was in redneck hell. The multitude of pickup trucks and motorcycles in the gravel parking lot should have told him this.

He heard loud music spill into the parking lot when a man dressed in tight jeans and a sleeveless flannel shirt walked outside. Quad knew his day wasn’t going to get any better when he watched the guy climb into his souped-up truck. He could only pray that there was a pay phone inside.

He walked into the two-story roadhouse, stopping briefly right inside the doorway to look around the interior. He was actually surprised at how nice the place seemed. The first floor of the large room seemed to be broken into different sections. To the right of him was a large wooden bar that ran almost the entire length of the east wall with several intimate tables near the far end.

Looking toward the second floor, he could see that it was in the shape of a square with the balcony overlooking the dance floor in the middle. There were also several tables and booths on the second floor, as well as pool tables. A few of those tables were being used by bikers and rednecks.

On each side of the dance floor on the back wall was a set of double doors leading out onto a wooden deck overlooking a clear blue lake. The second floor had double doors that he assumed led out to a balcony covering the deck.

Looking up the wide, wooden stairway to the left of the bar, he could see that directly above him must be the management offices, and below them, the restrooms. Just beyond the bathrooms, he could hear sounds coming from what he assumed was a working kitchen.

All in all, it was a pretty sweet setup. If this place were in his neighborhood, it would be an upper class restaurant. He could envision it with upscale clientele, waiters dressed in white shirts and ties, and a top class chef. It would make a lot of money. Too bad it was in the middle of nowhere, filled with rednecks and leather-clad bikers.

Quad strode toward the bar and took a seat at one of the vacant bar stools. He lifted his hand to signal the bartender and lost his train of thought. The sexiest man he’d ever laid eyes on stood at the other end of the bar.

He couldn’t have been more than five foot six and maybe a whopping one hundred and forty-five pounds. The stranger wasn’t a skinny bean poll like most of the twinks Quad knew. In fact, as far as he could tell, the bartender had lean muscle in all the right places. The man also had a seductive, wild beauty about him that called deeply to the primal alpha male in Quad.

Wisps of tendrils escaped the silken mass of long, braided snow-white hair and caressed the sides of his perfect high cheekbones. There was both a delicacy and a strength in his face. Pale green eyes were ringed by black lashes. His lips were full and rounded over even, white teeth, and smooth skin glowed with golden undertones.

Shapely thighs and a firm ass tapered into long straight legs. The man’s tight, faded blue jeans rode low on his hips. A ribbed, black tank top barely covered him from his collarbone down to just above his bellybutton. A thick, studded, black belt drew Quad’s attention to the man’s tight, flat muscular abdomen.

Quad’s tongue almost fell out of his mouth when he spotted the little piercing in the twink’s bellybutton, which was encircled with a sunburst type tattoo. Oh, man, would he love to nibble on that.

A Celtic tattoo encircled one of the man’s smooth, left arms. That made two tattoos that Quad could see. He wondered how many more the gorgeous little man had. He would give almost anything to go on a treasure hunt and find each and every one.

“What’ll it be, honey?” Mr. Sexy asked with a silky, southern accent. His voice alone could mesmerize Quad. It was sexy and smooth, like aged whiskey. He could listen to him talk all day long. Quad wondered briefly if the man would sound the same during sex.

“Hey, honey, you just going to stare at me all day, or you gonna order something?”

Quad just stared. He didn’t even blink when the little twink waved a hand in front of his face. He was too busy envisioning what he wanted to do to the man on any available flat surface.

25 of Siren Publishing’s hottest ManLove authors have come together to bring you a paranormal story with intrigue, wolf shifters, elves, magic, and a mating so sizzling hot, it took 25 authors just to write it.

There is a month-long giveaway associated with this tour!  Enter using the widget below!