Blood In The Water by Tami Veldura is a nice balance of adventure and romance between two pirates on a treasure hunt through the Caribbean.  This post contains affiliate links.  I received a copy of this book at no charge in exchange for my honest review.  All opinions are my own.

Blood In The Water by Tami Veldura 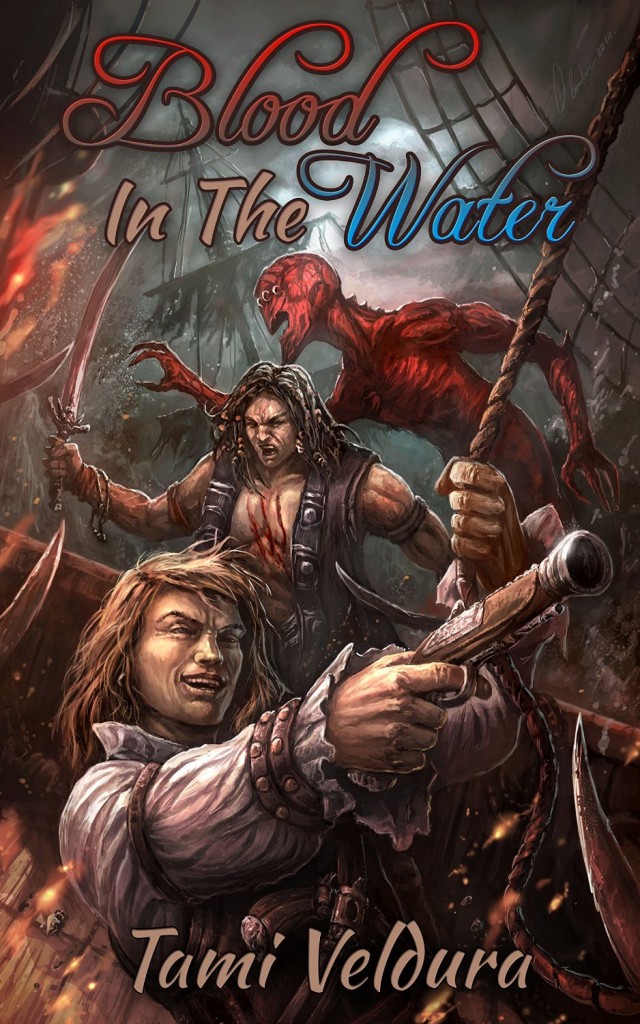 Kyros Vindex, treasure-hunter, has a problem. He’s carrying a torch for a fellow pirate with the sexual awareness of a teaspoon. Rumors say the man has killed hundreds. He’s determined to knock some sense into the work-a-holic that captains the Midnight Sun, but damned if he knows how.

Eric Deumont has more pressing concerns than the treasure-obsessed Kyros. There’s a creature inked into his chest that no witch in the seas will lay hands on for all the gold in the world. He knows it gives the Midnight Sun a cursed reputation and that doesn’t make living any easier. He has heard stories of spirits trapped for lifetimes inside spelled puzzle jars. Eric tracked down three of the pieces for such a jar with a lead number four. The fifth is still out there.

Even then, the spirit of vengeance that lives in Eric’s skin has no intention of giving up such easy access to the mortal realm. It craves blood and the light of the moon allows it to wreak unchecked havoc. Cursed is an insult. This is madness.

In Blood In The Water by Tami Veldura we meet Eric, the cursed pirate captain of the Midnight Sun, and Kyros Vindex, slightly smitten treasure hunter with a thing for cursed pirates. The Midnight Sun is rumored to be cursed but that doesn’t keep Kyros from tracking him down again and again.    Eric has a reputation for being a vicious man, slaughtering all those he captures but really it is the creature inked to his chest who thirsts for blood.

Eric is on a hunt for a solution to his curse but is thwarted when he discovers that Kyros has sailed off with the one item that might solve his problems.  There is a high seas chase, death and destruction, and finally the two men band together to rid Eric of his curse forever.  Unfortunately, things don’t go quite as planned and we are left wondering how these two men are going to fix the problems that they have created.

I enjoyed the characters and storyline created by Ms. Veldura.  It stayed rather true to what I would expect from a pirate love story with plenty of clashing swords, bloodthirsty battles, and high seas adventure.  I liked that Kyros and Eric were tender towards each other, despite their rough natures.  I enjoyed the fantasy aspect of the spirit Ghalil and found myself wanting to know more about his/it’s back story and how it came into being.

I was a bit confused early on because these two characters clearly knew each other already but the book is listed as the first in the series.  We are given glimpses of their previous history later in the book which cleared that up.  I thought the time frame was a tad bit jumpy in places but I think that is to be expected in some ways.  It probably takes months to sail across the Caribbean so you really can’t have a story that just moves along on a day to day basis.

I definitely think that Blood in the Water could have been made a bit longer to fully explain all the back story with the characters and their treasure hunt.  It was well written and definitely creative, I just found myself wanting to know more.  The ending is left a bit up in the air to make the way to book two in the series.  The men do get a happily ever after, it just isn’t the end of the treasure hunt!

If you love a good treasure hunt and a couple of sexy pirates I think you will definitely like  Blood in the Water  by Tami Veldura!