Blue Eyed Stranger by Alex Beecroft is the story of two history buffs trying to fall in love while battling closets, depression, and financial hardships.  It is book two of the Trowchester Blues series but can be read as a stand alone novel. Can these two men overcome their fears in order to create a future together? I received one copy of this book at no charge through Net Galley in exchange for my honest review.  All opinions are my own and this post contains affiliate links. 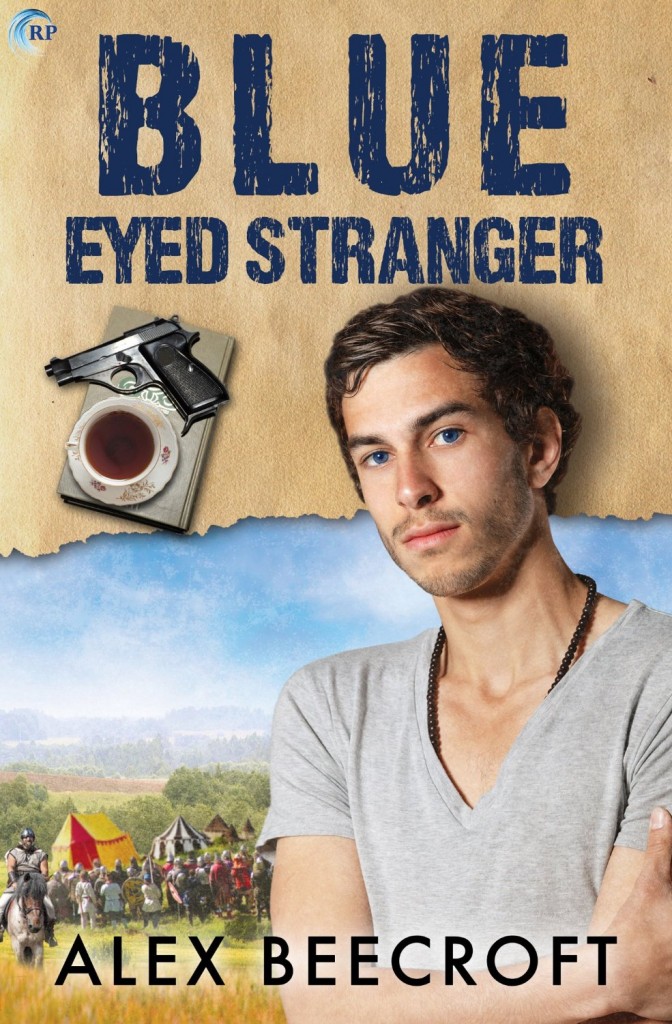 Blurb:  Billy Wright has a problem: he’s only visible when he’s wearing a mask. That’s fine when he’s performing at country fairs with the rest of his morris dancing troupe. But when he takes the paint off, his life is lonely and empty, and he struggles with crippling depression.

Martin Deng stands out from the crowd. After all, there aren’t that many black Vikings on the living history circuit. But as the founder of a fledgling historical re-enactment society, he’s lonely and harried. His boss doesn’t like his weekend activities, his warriors seem to expect him to run everything single-handedly, and it’s stressful enough being one minority without telling the hard men of his group he’s also gay.

When Billy’s and Martin’s societies are double-booked at a packed county show, they know at once they are kindred spirits, united by a deep feeling of connectedness to their history and culture. But they’re also both hiding in their different ways, and they need each other to be brave enough to take their masks off and still be seen.

Blue eyed stranger is the story of two history buffs trying to fall in love while battling closets, depression, and financial hardships.  Throw in a scary Russian with guns and you have an awful lot of stress.

Billy is battling serious depression issues. Like, can’t get out of bed, life is miserable depression. Except when he’s in costume for his dance troupe.  When he is in costume, the mask he wears seems to lift the veil of depression and it lets him be a whole new person.  A person who really wants to get to know Martin the Viking.

Martin is a teacher with a passion for historical reenactment.  Unfortunately, his hobby ends up getting him fired.  He is desperate to keep his sexuality under wraps so his father doesn’t find out.  He also worries how a gay teacher will ever find another job.  Unfortunately his denial of Billy as a boyfriend is horribly detrimental to Billy’s psychological health.

This book is really heavy on the historical data and really light on the romance.  Since history really isn’t my thing I found  myself getting bogged down with the details. You learn a lot about ancient musical instruments and Viking culture and it is interesting and clearly well researched but it just got to be a little too much for me.

I found the romance lacking between these two.  There is very little heat or chemistry and almost no physical interaction at all.  They seemed to be friends rather than lovers. I don’t necessarily need graphic on page details but I like to feel a bit of attraction and need between the main characters of a romance book.

The author tackles the topic of depressions and really delves in deep.  You can truly feel the overwhelming pressure that billy is living under and it is not magically cured by finding true love. I think this story  provides a very accurate representation of an overwhelmingly difficult topic.

I think this book is very well written and if you are a true history buff you will probably enjoy it more than I did.  I just couldn’t get past the lack of connection between the main characters and got bogged deepen in historical data.  If you like history with a light romance thrown in, I think you will really enjoy Blue Eyed Stranger.