In Submission Guidelines by T. Neilson, Cole just wants to start his life over in his new home.  He never anticipates that his new neighbor will soon be saving his life.  I received one copy of this book at no charge in exchange for my honest reviews but all opinions expressed here are my own. Check out my recent author interview with T. Neilson to learn more about the author and get an inside look at the story!  This post contains affiliate links. 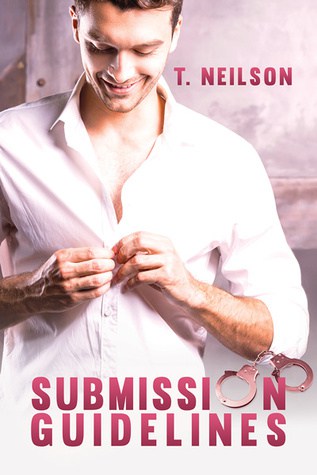 Book Blurb:  Cole Doren is starting over. He’s moved, started working as a food writer again, and is crushing hard on his new neighbor, Daniel Mazurek, who is a genuinely nice guy and as hot as a supernova.

Too bad for Cole, Daniel’s not what he seems.

Submission Guidelines by  T. Neilson starts out sweet and funny and ends up being fast paced and steamy.  Cole’s first meeting with his new neighbor is anything but smooth.  His slightly drunken afternoon embarrasses him beyond belief but he can’t quite get Daniel out of his mind.  Daniel, on the other hand, is not really who he says he is.  Sent to discover Cole’s true identity, Daniel is keeping a very close eye out on his new neighbor.  A bit too close, actually, and the two men are definitely interested in each other.  Events in Cole’s past have him acting cautiously when it comes to letting Daniel get close.  Daniel has his own reasons for keeping Cole at arm’s length.  However, once the truth is out both men have to focus on a threat that neither one of them anticipated.

Cole is a unique character with a few key issues he has to deal with from his past.  He is a foodie trying to make the switch from reviewer to writer.  He is sweet, a bit cautious and very smitten with his new neighbor.  You can tell he WANTS to be loved but is definitely a bit nervous about handing his heart over.

Daniel was generally a nice guy who is just doing his job.  He is studying Cole and knows deep down that he is NOT the guy his agency says he was.  I was a bit confused at first about WHO Daniel actually worked for.  At first it was a bit vague but it was cleared up as the story moved along. He is trying really hard to keep his distance so that his mission isn’t compromised but the lines get blurred a few times.

I enjoyed the plot twist as the story moved along although I think maybe it could have been made a bit longer.  I don’t want to give away the how and why of Daniel’s mission but I would have liked to see more of the ‘suspense/action’ portion of the story.

Overall, Submission Guidelines by T. Neilson was an enjoyable story with characters I truly enjoyed.  I wish it had been a bit longer to expound on the mystery itself but otherwise it was a very nice read.