Unmasking Zach by Edie Danford contains an unlikely friendship, an unwanted attraction, undeniable emotions, and enough outdoor sexy times to make a full moon blush.  I received one copy of this book at no charge in exchange for my honest reviews but all opinions expressed here are my own.  This post contains affiliate links. 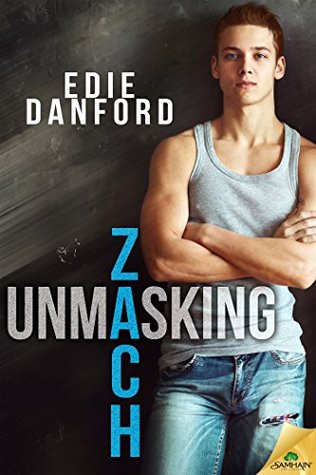 Before heading for grad school, Zach O’Malley needs downtime from his superhero-worthy schedule. Painting houses seems like the perfect summer gig for some mindless mellowing out.

There’s just one wrinkle in Zach’s Zen plan. Coworker Kirby Kurtcehajic, a hippie kid who starts hitting on him with happy and hardcore voracity three seconds after they meet. And has the ability to make his mind and body leap with a single smile.

Kirby would be the first to call himself a cockeyed optimist, but even he admits he’s had a tough year. After busting his knee, losing his cat, and accidentally demolishing his Vermont house, seducing way-too-serious Zach is the ideal distraction.

But when another spectacular mishap lands Kirby in crisis, Zach puts on his superhero cape to come to the rescue. And as boundaries dissolve, Kirby realizes he may be in too deep. Because the end of summer is coming, when Zach will be moving on, and Kirby will have to continue his quest for independence—alone.

In Unmasking Zach by Edie Danford, Zach has just finished his undergraduate degree and is spending the summer painting houses in his small Vermont hometown before heading off to business school in Boston.  Kirby is a bit of a hippy with a rough past who is living one day at a time and not worrying too much about the future.

Kirby is determined to have a fling with Zach….live for the moment and not worry about tomorrow.  However, Zach doesn’t really work that way and it takes a bit of work to get him to jump in bed.  Summer is coming to an end, Kirby has some serious issues to deal with, and Zach is refusing to think about the future.  Along with the serious amount of angst you will eventually get your happily ever after.

A few thoughts on Unmasking Zach:

It took me a while to connect to these characters and I can’t really say why.  The entire focus of the story is on Zach and Kirby’s budding friendship, sexual tension, and developing romance.  However, for the first half of the book it really sort of dragged for me.  I wasn’t really sure they actually liked each other…there just didn’t seem to be feelings tugging these two guys together.

Oddly enough, even though the title is ‘Unmasking Zach’, I actually felt that Kirby was the ‘main’ character of this story.  He was the puzzle that needed figuring out.  He has a rough history, a few things that really freak him out, maybe a few serious mental health issues that need addressing, and he is a bit of an enigma.  I think the book was more about unmasking Kirby than anything else.

Zach seems fairly straight forward.  He has a good family life, a middle class upbringing, a college education, and a plan for life he doesn’t really want to follow. Sort of like a lot of college grads.  Doing what they are expected to do rather than what they WANT to do.  He is a bit of a control freak I think, which sometimes works for Kirby and other times doesn’t.  I couldn’t figure out if Kirby wanted live a wild and free life or if he wanted Zach to order him around.

There were a lot of secondary characters in Unmasking Zach that were really well written.  Zach has a tight family and a few good friends and they are all genuinely nice people that helped move the story along.  I loved the yurt that Kirby lives in and it melded perfectly with his free spirited hippy personality.  The woods surrounding the yurt were beautifully described and I could almost feel that frigid river water and smell the fire in the fire pit.

Unmasking Zach was well written and Kirby was incredibly unique but for some reason, I just couldn’t really get into the romance between these two guys.  An enjoyable book but not one that had me turning page after page with a need to finish it.