Alpha, Delta by RJ Scot is a fast paced book with unique characters who will surprise you a bit by the end of the book! I received one copy of this book at no charge in exchange for an honest review.  This post contains affiliate links. 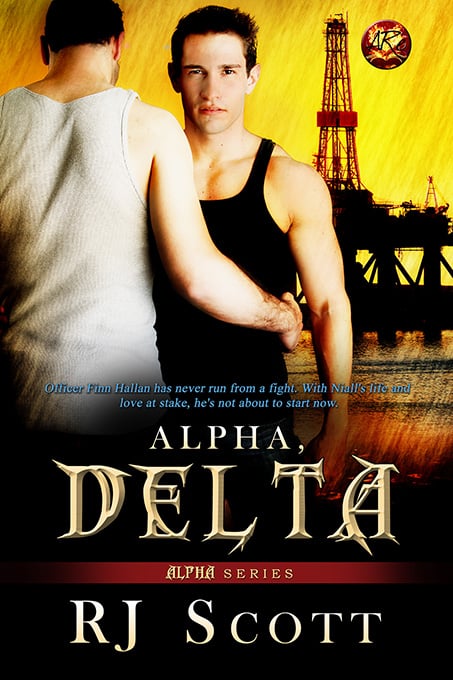 Officer Finn Hallan has never run from a fight. With Niall’s life and love at stake, he’s not about to start now…

Finn Hallan is a member of the elite Norwegian Emergency Response Unit, code name Delta. When the team is sent to respond to a hostage situation on an oil platform in the Norwegian Sea, he has to face demons he thought he had buried a long time ago.

Scottish engineer Niall Faulkner’s skills in oil platform decommissioning takes him to the Forseti platform at the worst possible time. When he’s captured by terrorists, his only thought is that he will never get to tell his lover how he really feels.

Can Finn keep Niall alive? Or will they both die at the hands of hijackers in the frigid waters of the Norwegian Sea?

I have always been a fan of RJ Scott’s books and Alpha, Delta certainly didn’t disappoint.  As the book opens, we meet Finn who is stuck listening to a presentation he really doesn’t want to be listening to. He fidgets, jokes with his partner and gets distracted by the cute nerdy guy giving the seminar.

Niall is the cute, nerdy engineer giving a lecture on oil rig decommissioning and he definitely notices the hot Delta in the audience.  When the two meet after the talk is over, sparks fly but Niall heads up to his room alone.  Finn has other ideas and the two progress to burning up the sheets and get to know each other.

Months pass with their sporadic dating when a twist of fate puts Niall in the hands of a terrorist and it is up to Finn to rescue him.  Near death definitely puts a relationship in a whole new light!

I absolutely loved Niall’s character.  As a scientist and a bit of a geek myself I loved how capable he was once the terrorists took over and his resourcefulness in time of need just goes to show that brains are sometimes more powerful than brawn!

Finn was honest and open and while not looking for love, was also not a jerk about spending quality time with Niall.  He seemed like a really great guy and I’m glad the whole ‘falling I love’ thing wasn’t too traumatic for him.

The plot in Alpha Delta was unique, well written and moved along at a brisk pace without feeling rushed which was nice to see.

There were a few typos but nothing too bad.  The first sex scene did get the character names mixed up once or twice which made it a bit distracting figuring out who was doing what.  Overall though, Alpha Delta was very well written and I thoroughly enjoyed it! 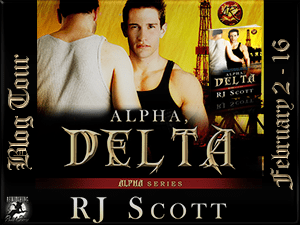 RJ Scott has been writing since age six, when she was made to stay in at lunchtime for an infraction involving cookies. She was told to write a story and two sides of paper about a trapped princess later, a lover of writing was born.

As an avid reader herself, she can be found reading anything from thrillers to sci-fi to horror. However, her first real true love will always be the world of romance where she takes cowboys, bodyguards, firemen and billionaires (to name a few) and writes dramatic and romantic stories of love and passion between these men.

With over sixty titles to her name and counting, she is the author of the award winning book, The Christmas Throwaway. She is also known for the Texas series charting the lives of Riley and Jack, and the Sanctuary series following the work of the Sanctuary Foundation and the people it protects.

Her goal is to write stories with a heart of romance, a troubled road to reach happiness, and most importantly, that hint of a happily ever after.

Always thrilled to hear from her readership, please contact her via the following links below: