Waiting for the Flood by Alexis Hall will make you think deeply about lost love and learning how to risk the heart again in the game of love. I was provided with one copy of this book at no charge in exchange for my honest review.

Waiting For the Flood 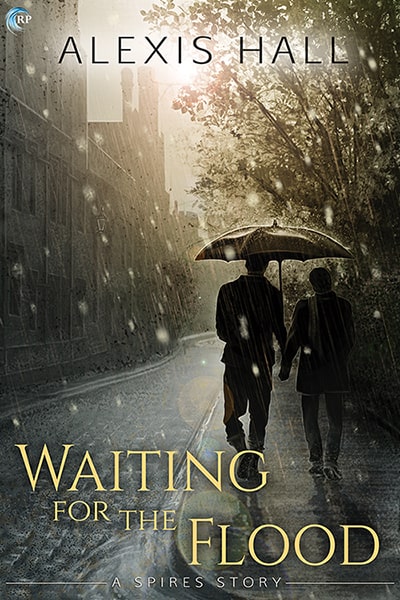 People come as well as go.

Twelve years ago, Edwin Tully came to Oxford and fell in love with a boy named Marius. He was brilliant. An artist. It was going to be forever.

Two years ago, it ended.

Now Edwin lives alone in the house they used to share. He tends to damaged books and faded memories, trying to build a future from the fragments of the past.

Then the weather turns, and the river spills into Edwin’s quiet world, bringing with it Adam Dacre from the Environment Agency. An unlikely knight, this stranger with roughened hands and worn wellingtons, but he offers Edwin the hope of something he thought he would never have again.

As the two men grow closer in their struggle against the rising waters, Edwin learns he can’t protect himself from everything—and sometimes he doesn’t need to try.

In Waiting for the Flood, there are two very different characters who seem to find a few common interests with which to build the beginnings of a relationship.

Edwin is a painfully shy young man with a passion for repairing old books.  He has a speech impediment which makes him doubt and rethink every word out of his mouth.  He is recovering from a broken heart, having been left by a long time lover 2 years previous.  He doubts he will ever trust his heart to another human being again but seems drawn to the engineer working to keep his neighborhood from flooding.

Adam has been sent to try and keep a particular part of town from being taken over by river water.  He is working on sandbagging and assorted engineering projects when Edwin approaches him for help.  He seems smitten and determined to get to know Edwin…not even being dissuaded when he realizes that Edwin is hesitant to get involved.  He seems to be a larger than life, very happy go lucky sort but he has a geeky side as well, which is really drawn to Edwin’s love of historical books and manuscripts.

I had a hard time getting into this one mainly because the writing seemed very complicated. While it was beautiful and poetic, it also tended to be a bit too formal and stiff for me to really loosen up and dive right into.  I did love the little blurb at the beginning of each chapter that described a room of Edwin’s house based on the memories that the room held for him.  I thought it really made the setting come alive and gave you a little more insight into Edwin’s history.

As for the characters, I really didn’t like Edwin that much.  I understand that he was broken hearted and hesitant to love again but he came across as a bit whiny and rather weak.  I loved his dedication to his neighbor and his love of historical reading material but would have liked him to have a bit more of a spine, even if he isn’t exactly assertive.

I really liked Adam…his joy of life and patience with Edwin were quite sweet and I loved that he had an inner ‘geek’ to go along with the outward brawn.

In terms of the romance itself, there really wasn’t much spark.  Much of the book was dealing with the flood and Edwin learning to trust Adam.  I didn’t really feel much attraction between them, other than what Edwin talked about in his head.

Overall, Waiting for the flood was a nice read that will challenge you to really think about the story that you are reading.  I enjoyed it, but definitely would have liked to see the story continue on a bit more past the point where it finished.

Alexis Hall was born in the early 1980s and still thinks the 21st century is the future. To this day, he feels cheated that he lived through a fin de siècle but inexplicably failed to drink a single glass of absinthe, dance with a single courtesan, or stay in a single garret.

He did the Oxbridge thing sometime in the 2000s and failed to learn anything of substance. He has had many jobs, including ice cream maker, fortune teller, lab technician, and professional gambler. He was fired from most of them.

He can neither cook nor sing, but he can handle a 17th century smallsword, punts from the proper end, and knows how to hotwire a car.

He lives in southeast England, with no cats and no children, and fully intends to keep it that way.

Every comment on this blog tour enters you in a drawing for a title from Alexis Hall’s backlist (not including Waiting for the Flood.) Entries close at midnight, Eastern time, on February 28. Contest is NOT restricted to U.S. entries.