I received one copy of this book at no charge in exchange for my honest reviews but all opinions expressed here are my own.

by JL Merrow and Josephine Myles 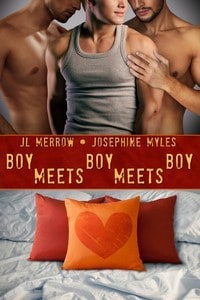 JL Merrow is that rare beast, an English person who refuses to drink tea.  She read Natural Sciences at Cambridge, where she learned many things, chief amongst which was that she never wanted to see the inside of a lab ever again.  Her one regret is that she never mastered the ability of punting one-handed whilst holding a glass of champagne.

She writes across genres, with a preference for contemporary gay romance and mysteries, and is frequently accused of humour.  Her novel Slam! won the 2013 Rainbow Award for Best LGBT Romantic Comedy, and her novella Muscling Through and novel Relief Valve were both EPIC Awards finalists.

English through and through, Josephine Myles is addicted to tea and busy cultivating a reputation for eccentricity. She writes gay erotica and romance, but finds the erotica keeps cuddling up to the romance, and the romance keeps corrupting the erotica. Jo blames her rebellious muse but he never listens to her anyway, no matter how much she threatens him with a big stick. She’s beginning to suspect he enjoys it.

Jo publishes regularly with Samhain, and now has over ten novels and novellas under her belt. Her novel Stuff won the 2014 Rainbow Award for Best Bisexual Romance, and her novella Merry Gentlemen won the 2014 Rainbow Award for Best Gay Romantic Comedy. She has also been known to edit anthologies and self-publish on occasion, although she prefers to leave the “boring bits” of the ebook creation process to someone else. She loves to be busy, and is currently having fun trying to work out how she is going to fit in her love of writing, dressmaking and attending cabaret shows in fabulous clothing around the demands of a preteen with special needs and a soon-to-be toddler.

Let your fantasies run wild as you take in the fit bodies down at the gym, or enjoy a very special birthday present from a loving partner. And even a trip to the dentist can be enjoyable with the right sort of distraction!

These stories have all been previously published, but are now available exclusively in this anthology.

Working late at the gym one night, Kit’s delighted when two of his fantasies made flesh come in for a workout. The guys he’s dubbed Black Muscle Vest and Grey Sweats are tall, gorgeous and insanely built, and Kit can hardly take his eyes off their glistening, pumped-up muscles.

But he’s not the only one who’s been dreaming of a little hot and sweaty man-on-man-on-man action. Harry and Sven are only too happy to make Kit’s fantasy a reality in the changing room—and Kit’s going to get a workout of his own he’ll never forget!

Getting a Filling by JL Merrow

Ivo’s terrified of going to the dentist, even with his lover, Colin, there for moral support. But when the dentist turns out to be gorgeous—and gay—fear turns to flirtation. The next time Ivo ends up in the dentist’s chair it’s a lot more fun, as the support Colin and Ted give him is very immoral indeed!

Let me begin by saying that I loved the intro the authors gave before each story began.  I always wonder what inspired an author to write a story and in Boy Meets Boy Meets Boy, you get to find out.  Each author writes a brief blurb about how the story you are about to read came into being.  It was a nice touch!

This was definitely the shortest of the three stories and I think could have been a bit longer.  Kit is drooling over a couple of guys who have been coming into his gym for a  workout.  They are tall and sexy and those muscles just call out to be touched.  Locker room antics ensue and everyone leaves incredibly happy.

Unwrapped: The Birthday Gift by Josephine Myles (4 stars out of 5)

I liked Pedro’s character.  Slightly older, totally relaxed and comfortable with himself, and a really decent sounding guy.  Willing to make Mark and Dave happy and for himself, just satisfied to be along for the ride.  There is actual conversation between them all and a nice amount of story detail and character development.  Considering how short the story is, I was impressed with how it played out.

Enjoyed this one quite a bit, but with my own squeamish dentist fears the entire concept of being relaxed enough to fool around with the dentist is foreign to me!

Ivo is incredibly uptight about going to the dentist until he sees the guy.  Smoking hot and very relaxed.  Colin (Ivo’s boyfriend) drops sexual innuendos the whole time Ivo is getting a filling and they all enjoy a little light hearted banter.  When they bump into each other a few days after the procedure at a pub, they decide to take the banter into the bedroom.  Or, should I say…into the dentist chair?  Since the dentist office in the lower level of his house, it makes playing in the dentist chair much easier!

Enjoyed the interactions between Ivo and Colin.  Colin good naturedly teasing and making jokes and Ivo just rolling his eyes and ignoring him.  They had a nice dynamic between them.  Ted the dentist sounded incredibly sexy and I wouldn’t mind trading my own dentist for him one day!  Also seemed like a good guy and the three of them fit nicely together.

Overall, Boy Meets Boy Meets Boy by JL Merrow and Josephine Myles is a nice collection of fantasies to pick up when you only have a short time but want something steamy and fun to read.