Breaking by Barbara Elsborg contains multiple assassins, two dominant men fighting for control, and an intriguing plot twist or two.  Throw in plenty of heat and one very happy dog and you have an awesome story I could not put down! I received one copy of this book at no charge through Net Galley in exchange for my honest opinion.  This post contains affiliate links. 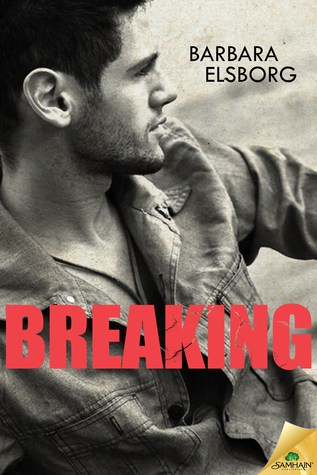 Keeping secrets is easy. Until love tempts him to break his cover.

Archer Hart, former SIS assassin, has just completed a freelance hit job when he finds himself in a sniper’s scope. The bullet whizzing past his ear is a clear message: someone wants him dead. Retirement will have to wait, as his only choice is to assume a new identity—and keep running.

Conrad Black is a broken man. The injured barrister has come to the beach to recover from a hit-and-run “accident”, with plenty of time to wonder who might be wishing he’d been left dead instead of partially paralyzed. When he spots a surfer in trouble, he throws his crutches aside to pull the man to safety.

One glance at Archer takes Conrad’s breath away. And Archer finds himself envying the hands Conrad is using to pet his dog. But as the net tightens, both men can feel the targets on their backs heating up. The only thing that will save them is the truth…before death snatches away their one chance at love.

Warning: Contains a mercenary who’s broken the law beyond all recognition, and an uptight barrister who is the law. Also: a whole lot of crossing lines drawn in the sand, and even more tussling to determine who gets on top.

From the very beginning of Breaking I was intrigued.  I could not fathom how the author was going to take these two men’s difficult situations and meld them into one story with a hopefully happy ending.  This turned out to be one of those books where I dreaded having to stop reading to do such ordinary things as sleep and cook dinner! While Breaking is book 2 of the series, I did not read the first one but had no trouble following the storyline.   I do, however, now want to read book 1!Archer is a retired killer.  Well, he is trying to retire from the business because apparently it isn’t safe for him to continue and honestly he needs to quit for his own sanity.  He is currently trying to find something he is good at.  Surfing isn’t one of them and he ends up unconscious in the ocean far too close to death.  Conrad is recovering from a hit and run accident that he insists isn’t an accident.  No one believes him.  As a barrister, he has made a few enemies over the years but can’t fathom who would want him dead.  Struggling down the beach on crutches, he stumbles across a near dead Archer and manages to pull him to safety. I don’t want to give away any spoilers because there are a lot of twists and turns to this book.  Both men’s problems combine into one gigantic problem and it will take every resource available to get out alive. The detail and thought that went into Breaking are amazing.  The story is intense and riveting but the author somehow manages to inject a bit of lighthearted humor into it as well. There is a touch of bantering between Conrad and Archer that softens the edges of the story a little bit.  I loved the ‘who’s on top’ struggles that went on for most of the book.  Conrad and Archer are both incredibly dominant and intelligent and passionate men.  Watching them sort out who is in charge was amusing and incredibly hot!  There is definitely some heat to this book but it fits in beautifully with the storyline…adding to it and not distracting from it.   I will say that the only minor issue I had with Breaking was getting used to the point of view switch. It happens often and not on a chapter by chapter basis. So you may read one scene in archers voice and the next scene is in Conrad’s voice.  I got used to it after a few chapters but at first it took me a minute to figure out who was thinking what.  Overall, Breaking was an amazing story and one I didn’t want to end.  Now, I am going to go back and read book one and wait impatiently to see if there is a book three!