In Can’t Hide from Me by Cordelia Kingsbridge, running into your ex is hard enough without a dangerous stalker in the mix.  I received one copy of this book at no charge in exchange for my honest reviews but all opinions expressed here are my own.  This post contains affiliate links.

Can’t Hide from Me by Cordelia Kingsbridge

Purchase Can’t Hide from Me on Amazon 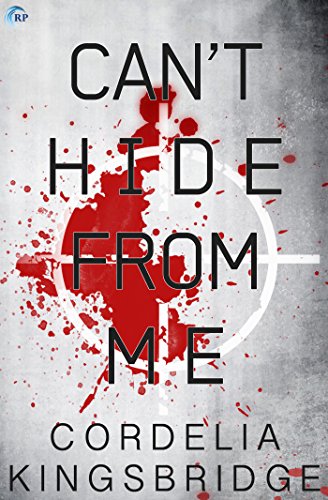 Title:   Can’t Hide from Me

Can’t Hide from Me Book Blurb:

Charles Hunter’s team is on a mission to extract an unidentified ATF agent from an undercover job gone wrong. All they’ve got to go on is the rendezvous location — until Charles recognizes the ex he hasn’t seen in years. Their “simple rescue mission” is about to get a lot more complicated.

For Ángel Medina, adjusting to life after his cartel nightmare is hard enough without confronting memories of a failed relationship. All he wants is a fresh start. But when a violent stalker lashes out from the shadows, Ángel realizes his nightmare is far from over.

As the stalker’s obsession escalates and bodies start dropping, Charles and Ángel are thrown together in a desperate search for the culprit. Tempers flare and old passions reignite, drawing them back into the same turbulent relationship that once ended in disaster.

But the stalker isn’t letting go — and the next strike might hit straight through the heart.

Can’t Hide from Me  Review:

Angel has been undercover in a drug cartel but due to a serious leadership breakdown and increasing hostility within the cartel, he is starting to fear for his life and needs to get out.  He saw and experienced some pretty rough and nasty stuff while he was undercover and he definitely has a few emotional scars as a result.  He doesn’t expect to get pulled out of the assignment by his ex…and it was not a relationship that ended on friendly terms.

Charles doesn’t expect to see Angel ever again but here he is in the middle of his mission. But, he is here to do a job and that is exactly what he is going to do, no matter how much his heart hurts over seeing this guy again.  When a stalker enters the picture, the stress has them both ready to fight and ready to jump in bed together.

Can’t Hide from Me by Cordelia Kingsbridge is action packed from the very beginning of the story and I could not put it down.  There is a wonderful balance between the action of the plot and the interpersonal relationships between the main and supporting characters. Charles’ team has a very tight knit relationship and I am immediately curious about the history between Charles and Angel.

I must say that I was immediately curious about the history between Charles and Angel.  The author does a wonderful job of giving you tidbits of their past without exposing the whole story all at once.  She also created a crime drama that was incredibly well thought out and really kept you on the edge of your seat throughout the entire book.

The chemistry between these two guys is off the charts hot,  although a lot of times they just come together in anger because they can’t seem to find their way past it to anything else.  They both have some emotional baggage from their past together and when you throw that in with the stress of being stalked by a crazed maniac, these guys are pretty high strung.

Overall, I really enjoyed Can’t Hide from Me by  Cordelia Kingsbridge.  There is a ton of drama that is very well written.  It definitely had a rather dark plot and it hurt to read about some of the things that Angel had gone through in the drug cartel.  The mystery of ‘who done it’ is creative, although I was right in my suspicions so it wasn’t a total surprise when I got to the end.  Well thought out characters and definitely an engaging story.