In Change of Address by Jordan S. Brock, Michael is recovering from traumatic injuries in a sleepy island town.  He never expected love to sneak up on him along the way. I received one copy of this book at no charge in exchange for my honest reviews but all opinions expressed here are my own.  This post contains affiliate links. 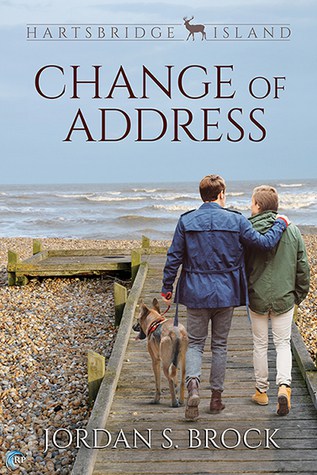 About the Author:  Learn more about Jordan S. Brock by checking out the author’s website or following along on Facebook.

Air Force sergeant Michael Baldwin wanted nothing more than to escape his family’s political ambitions, but his dream of freedom was shattered by an enemy bullet to the head. Two years later, he and his service dog, Kaylee, resist his father’s demand to join him on the campaign trail-where a photogenic “wounded warrior” is always an asset-and instead return to the family’s summer home on Hartsbridge Island.

There Michael and his beautiful German shepherd capture the attention of Josh Goldberg, co-owner of the local bagel shop. Josh has a knack for business and a killer repertoire of his bubbe’s recipes. But lack of education undermines his confidence, and Josh’s father doesn’t share his ambition for the restaurant’s future.

Chicken soup and bacon might be the way to Michael’s heart, but he and Josh need time to learn about everything that comes after-lessons that Governor Baldwin and his relentless ambition will do anything to thwart. Letting someone in is a tall order for two men who can’t trust themselves, but if they have any hope of a future together, that’s exactly what they’ll need to do.

Change of Address by Jordan S. Brock is a slow and sweet gay romance featuring Michael, (wounded warrior), his loyal service dog, and Josh, bagel shop owner extraordinaire.  And while there were a lot of things I loved about this story, it lacked a certain oomph to it that would have really grabbed my attention.

Michael is the son of an up and coming politician.  He wants nothing to do with politics and is struggling to recover after a traumatic injury sustained while in the air force.  He comes back to the quiet little island town he used to vacation at as a child to find peace while he heals.  His service dog, an amazing German Shepherd named Kaylee, is a HUGE part of this story.  So much so that I think the focus was more on the bond between her and Michael rather than Michael and Josh.  Which, don’t get me wrong, is the way a bond between service dog and human SHOULD be.  It was truly beautiful to read about her training, care and the ways she used to keep him steady.  I have owned shepherds all my life and I think she was my favorite part of the whole story.

Josh is a townie, co owner of the local bagel shop with his dad and an all around cute guy.  A little hard on himself since he has some learning problems and very little education.  He has a few extra pounds on him (he does love his bagels) and doesn’t think of himself as much of a catch but he falls hard for Michael and is so incredibly understanding about Michael’s limitations and physical complications.

Michael intrigues me.  His history and injury in the service blend together to make him a unique balance of sophisticated yet shy and insecure.  Josh is younger than Michael but hard working and very grounded.  They really make a beautiful couple, but there seems to be little heat between them for most of the story.  I wanted a bit more relationship developing.  They do talk to each other about their backgrounds and personal struggles….I guess I just couldn’t really feel the romance for most of the story.  About 3/4 of the way in you start really getting a glimpse into their feelings for each other so I think it ended on a strong note.

I was really rooting for Michael and Josh.  They had emotional, physical and family issues to deal with but eventually managed to overcome those obstacles and really create a beautiful relationship with each other.

If you are looking for a slow, sweet romance then Change of Address by Jordan S. Brock is a great choice.  Especially if you are a dog lover since Kaylee was just awesome!