Changing on the Fly is a celebration of romance, featuring six M/M stories about hockey players falling in love on – and off – the ice.  All proceeds from the anthology will be donated to a charity that supports inclusiveness in athletics. I received one copy of this book at no charge in exchange for my honest reviews but all opinions expressed here are my own.  This post contains affiliate links.

Changing on the Fly: A Hockey Charity Anthology

Purchase Changing on the Fly on Amazon 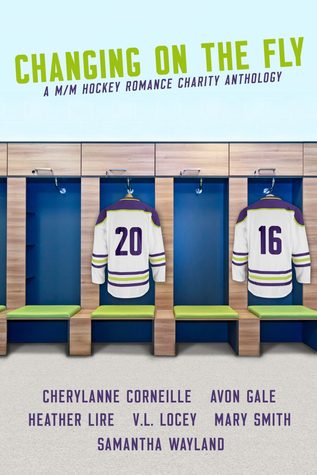 Title: Changing on the Fly

There was an awful lot of variability when it comes to my enjoyment of each story in the Changing on the Fly anthology.  I will try to give a brief opinion of each one.

You start off the story with the two main characters fighting and honestly, they don’t spend all that much time together during the book.  Nate is a rookie hockey player and his boyfriend is a graduate student.  Between their busy schedules they are never together and when they are, it seems like they spend most of it arguing.  You can tell they love each other, though, and the story is mostly about them realizing that and trying to find a way to make their hectic lives work.  There is no heat in this story and everything is faded to black.  I just don’t see much actual romance, relationship development, etc. going on.  It really did not keep my interest.

Must admit, Avon Gale is a huge hit for me and she is pretty much an auto-buy. I really enjoyed Next Season just as much as her longer stories.  Nick is shy and quiet and doesn’t want to be in the spotlight. Everett has been around a while and knows all the ins and outs of professional hockey. Everett and Nick get traded together to a new team which results in a really cranky Everett and Nick is just trying to keep himself out of the limelight.

These two characters have a nice friendship develop throughout the story.  It takes almost a whole year to unfold and since this is a short novella, you skip through things pretty quickly but that is to be expected. There is a nice balance between camaraderie and chemistry, making their tumbling into bed together quite enjoyable.  They are seriously cute together and while the heat is pretty high in this one, the focus is mainly on the friendship and the hockey. I will say, since this story is only told in Nick’s POV, you really don’t get to know Everett very well which I was sort of bummed about. But, overall, I loved this story.  You get friends, lovers, sweetness, heat and a HEA all rolled into one well told story.

Okay, my rating on this one might not be fair but this is not a whole story.  The author gave us the first few chapters of a new book she wrote, stating that she just couldn’t shorten these guys story to anthology length.  That is not what an anthology is supposed to be about and it annoyed me.  You basically get a character intro and a peak at what the drama/story will be about and then the rest of the book is a cliffhanger.

Okay, I normally love V.L. Locey’s stories but this wasn’t one of my favorites.  Star hockey player, Riley, is in the closet.  He becomes fascinated by a homeless guy he spots out ice skating and showing off some hockey moves on the ice.  Rocket (the homeless guy) is honestly a jerk in my mind.  He prostitutes himself, is angry and belligerent and honestly I dislike him from the beginning. There are a few big elements in the story….Riley and Rocket falling in love (although it seems more like Rocket just moving in because he has nowhere else to go…..), Riley coming out publicly as a professional gay hockey player, etc.  Things seemed a bit rushed, which happens in short stories, unfortunately.  I felt like I didn’t really get to know the characters well and what I did know of Rocket I really didn’t like.

The Brother and the Retired Player by Mary Smith (Rating 2, Heat 1)

This was another I didn’t really care for all that much.  Overall, the writing is very choppy and just doesn’t flow well at all.  It seems very formal and stiff in areas. Kian has been taking care of his younger brother Kyson for years since their parents died.  Kyson is a hockey player and Kian is his personal assistant.  Kian is determined to make a life for himself outside of Kyson so that is primarily what the story focuses on.  Kian is looking for a job and gets to know Tim, a retired hockey player.  They spend a lot of time going out to dinner but the dialogue just seems stilted. Kian does not seem particularly mature, given that he is supposed to be 41.  The story just dragged for me and I really didn’t enjoy it.

Samantha Wayland is another great author and I loved her addition to this anthology.  The story gripped me right away and the writing is engaging and smooth.   Christ and Tim have been friends for a long time, although Chris harbors a secret crush on his very straight friend Tim.  They are on the same team as Mike and Alexi from Crashing the Net and I was thrilled to see them again.  Chris suffers a horrible injury (I cringed through it!) and it is up to Tim to take care of him.  As they grow closer, Chris gets more frustrated and Tim is still pretty clueless.  You get plenty of sexual frustration, good-natured teasing, friends to lovers sweetness and a nice amount of heat.  They have known each other since they were teens so when they finally get together, the relationship is already stable and you just add in a whole bunch of heat.  Definitely one of my favorite in the anthology.

Changing on the Fly: A Hockey Charity Anthology is a charity anthology so while there are a few stories I would skip in the book, the others make up for it and the money goes to a worthy cause.