Cold Fusion by Harper Fox is about a disgraced environmentalist and an autistic genius who go from strangers to lovers-for-life in thirteen days. I received one copy of this book at no charge in exchange for my honest reviews but all opinions expressed here are my own.  This post contains affiliate links. 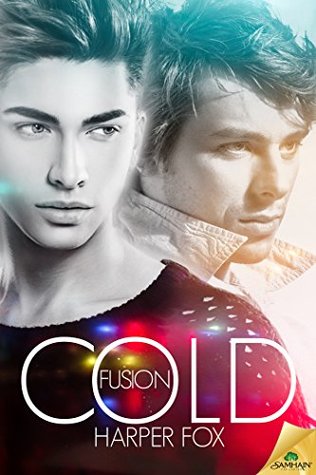 About the Author:  Learn more about Harper Fox by checking out the author’s website or following along on Twitter.

As an environmental activist for Peace Warrior, Kier Mallory never hesitated to throw himself into dangerous situations. Until his hotheadedness costs the lives of two fellow crewmembers on an anti-whaling mission.

He finds no refuge in his hometown on Scotland’s north coast, where everyone knows what this son of a broken fisherman has done. Effectively homeless, Mal returns to one of his favorite places—Spindrift, a rustic colony of artist and crafter huts.

Spindrift is dilapidated and empty, save for a lone resident. Vivian Calder, a brilliant but emotionally detached scientist who appears to have done the impossible—mastered cold fusion. A clean, free, limitless source of power.

Despite Viv’s aversion to contact, a fragile bond forms between them, seemingly one atom at a time. Until Mal, determined to redeem himself by revealing Viv’s accomplishment to the world, brings down the wrath of an oil-dependent establishment, risking not only their love, but Viv’s life.

In Cold Fusion by Harper Fox you have one die hard environmentalist who is coming home to Northern Scotland with his tail between his legs.  A horrible accident, the death of good friends, and rose colored glasses that have been completely shattered send Kier Mallory back to his parents home in a tiny seaside town.  The fact that he is unwanted even at home isn’t a shock but he has nowhere else to go.  He heads to Spindrift, which used to be a rustic colony of artists where he sought refuge as a child.  Now, it is broken down and nearly deserted except for one brilliant and autistic genius who has apparently mastered the impossible.  Could cold fusion, a clean and limitless power source, really have been discovered?

Vivian is the son of a local laird but being autistic leaves him emotionally detached and socially awkward.  He is brilliant enough to master cold fusion but is incapable of human emotion.  Or, so he thought.  As danger moves in and threatens both Viv and Kier, they need to protect themselves, Viv’s discovery, and their fragile budding relationship.  However, there are more factors working against their happily ever after than Keir had first realized.

Let me just say that the beginning of Cold Fusion by Harper Fox is incredibly moving and sad.  The layout of the story is unusual in that you have lots of action and adventure in the beginning…then a lull while Kier and Viv fall in love…then more drama towards the end.  I wasn’t sure at first how I felt about the layout but after having finished the story can definitely say it totally worked.

The author does an amazing job with the descriptive aspects of this story.  You can FEEL Kier’s desolation.  The weight of guilt is bogging him down and he has nowhere left to go.  You are left feeling slightly bleak and depressed at his situation.

The writing itself is almost poetic.  There were times I thought maybe it was a bit TOO wordy but you can practically see the rundown huts on Spindrift in your mind.  The shores and rocky coast and the cold spray of ocean practically jump off the page and right into your brain.  Yes, the story is wordy but those words paint a truly amazing picture.

Vivian’s character was incredibly unique.  At first I felt like I really didn’t understand him very well but as you move through the book you get a better and better feeling for him.  Incredibly brilliant, emotionally distant, obsessively organized…but he desperately begins to crave the connection to reality that Kier provides.  Their tender romance is sweet and funny as they each try to make allowances for one another.  You don’t get much romance until mid way through the book but when they finally start getting to know each other romantically it just tugged at my heart strings.  I SO wanted Vivian to learn what love really felt like.

Just when you think this book has about come to a conclusion, there is a bit of drama that these two need to work through in order to get their happily ever after.  I thought the ending was brilliant, though, and a perfect ending for these two guys.

So, in summary, plenty of science geekery to keep me interested, lots of poetic and descriptive narrative, some light humor as Vivian learns to really live life to it’s fullest, and a sweet and sexy romance.  Cold Fusion by Harper Fox is definitely a must read!