Crash and Burn by Abigail Roux is the 9th and final book of the Cut and Run series.  You definitely need to read the other books in order before reading this one or you will not understand the full story arc.  I will try to write this book review without any major spoilers since I know there are a lot of die hard fans still waiting to read it!

Crash and Burn by Abigail Roux 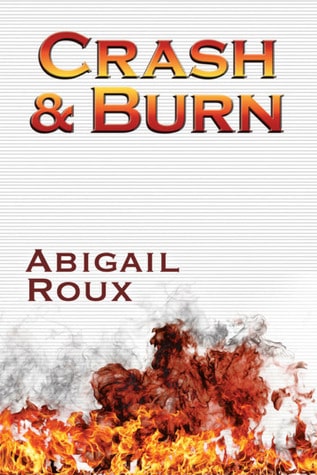 It’s been five years since Special Agents Ty Grady and Zane Garrett first worked together to solve the Tri-State murders, and time has been both harsh and kind. Engaged now, they face the challenge of planning a deeply uncertain future together. Zane is at the pinnacle of his career with one last mystery to solve, while Ty is at sea in a world where he’s no longer the tip of a spear.

There’s just one more hurdle in the way of their happy ever after: a traitor from their inner circle who threatens to burn their world to the ground.

Squeezed between the Vega cartel, an unknown mole, and too many alphabet agencies to count, Ty and Zane must gather all their strength and resources to beat the longest odds they’ve ever faced. To make it out alive, they’ll need help from every friend they’ve got. Even the friends who might betray their trust.

Okay, just to it clear from the start:  I am a die hard Cut and Run fan.  I have read every single book in this series multiple times.  Yes, I have liked some of them more than others.  Yes, I have been annoyed at a few of the plot twists that the author has created.  However, every single one of these books is on my ‘read over and over again’ list.

Also, if you have not read the rest of the book in this series, do it NOW.  You will not understand this book at all if you don’t start from the beginning and immerse yourself in the Cut and Run Universe (that includes the authors ‘side tracks’ like The Sidewinder series and Warrior’s Cross).

Okay to attempt to review this without spoilers:

You do get a Ty and Zane marriage.  However it really plays very little part in the actual story line.  Part of me was disappointed about how the author handles their nuptials.  I wanted more.  But then I realized that while these two guys have their romantic moments, their relationship is not really based on romance.  The real story in Crash and Burn is the unraveling of the mysteries that have been created in the previous books.  And explosions.  LOTS of explosions!

You find out who killed Richard Burns.  I was shocked and disappointed when I found out who the killer was.  However, you learn as you get into the story that Burns was not the guy you really thought he was.  (hopefully that isn’t too much of a spoiler there!).  The identity of the killer and the reason behind his death will actually clear up a few things from the previous book (Ball and Chain-the eighth book).  I will be going back and rereading that one with the knowledge I have now!

The Ty and Nick issue with the strain on their relationship will have to undergo a bit more stress but they WILL make peace with each other eventually.  The culmination of this, the apology, the heart to heart discussion…it brought tears to my eyes as well as the other boys who witnessed the scene.  Nick’s story line is left up in the air at the end.  His story will continue in The Sidewinder Series book 3 which is due out in November so don’t expect a happily ever after for Nick just yet.

Zane takes a major role in this book and he is incredibly awesome.  He has to rely on all of his physical skills, his geeky tech side, and his instincts to outsmart the cartel and figure out the mole situation in the FBI office.  Unfortunately, he gets stomped on emotionally and physically off and on throughout this entire book and I just wanted to hold him and make it all better!

There is a lot of action in this book so don’t just try and skim over it to get to the end of the story.  The cartel is sneaky and devious and has it’s fingers in a LOT of pies.  Multiple alphabet agencies have a stake in the outcome of this mystery.  I admit, I had to go back and reread certain things in the middle of the book where I got a little turned around at who was doing what.  It is incredibly well written, thorough, and makes total sense but you need to follow the story carefully.

There is humor in this book…just like in the other 8 books of the series.  These guys deal with the stress and explosions by keeping their sense of humor.  A few quotes to give you an idea:

“I just need you to know…I…I hate baseball.”
“You shut your whore mouth!”

“If he was going to lose a chunk of himself in a sex-related accident, he definitely didn’t want to watch.”

“If there is anyone present here today who objects to this union, please take it up with the two armed federal agents who are getting hitched.”

There were a few places where I just laughed out loud at the quips that they came up with.

There were also places where I went “NOOOOO!”…because people died.  People I really didn’t want to die.  I won’t say who but I am hoping that somehow they are not really dead and will show up in another book.  PLEASE???

After the kick ass explosions, the discovery of all the bad guys, and the end of the crisis you will get your happily ever after.  Zane will get his books, Ty will get his fluffy things, and they both have the option to continue killing things in the future.  But, their story line is over and I am truly very sad.  I’m sure we will get glimpses of them in the author’s other spinoff series but at least I can rest easy knowing that they are happy and married and have maintained their unique sense of humor along with some seriously sizzling passion. These two can definitely heat up the sheets.  Even when knives and round beds come into play!

And make sure you read to the VERY LAST page of this book…after the acknowledgements and available books listing and all that jazz.  THE VERY LAST PAGE!

I was thrilled with the way that the author ended this series even though I am very mad that she actually ENDED it!  I really wanted more for Ty and Zane but it was time for them to have a bit of peace!