In Dark & Dazzling by Elizabeth Varlet, Azariah is a beautiful combination of fierce and fabulous. He doesn’t need a hero.  But Connelly is a white knight with a badge who can’t stay away.  I received one copy of this book at no charge in exchange for my honest reviews but all opinions expressed here are my own.  This post contains affiliate links. 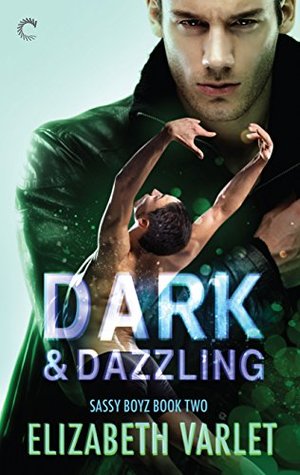 About the Author:  Learn more about Elizabeth Varlet by checking out the author’s website or following along on  Twitter.

Azariah “Z” Hayes is a diamond. Equal parts strength and sparkle, he’s more than capable of standing on his own stilettos. So if waiting tables and stripping at The Vibe are what it takes to keep a roof over his head, well, there are worse ways to earn a living.

Connelly is a white knight with a badge…

For NYPD detective Connelly Reid, to serve and protect is just another day at the office—even if that means protecting himself from his own true desires. He’s been curious about Z, his waiter, for months, but it’s not until he sees him in his makeup and heels that the curiosity becomes a fierce attraction. Z, despite all his over-the-top dazzle, might just be the man Connelly has been waiting for his entire life.

In Dark & Dazzling by Elizabeth Varlet, Z is truly fierce and fabulous.  He has had a hard past but is working hard to keep a roof over his head.  Waiting tables during the day pays the bills but his true passion is dancing at the Vibe.  In stilettos and glitter, he and the rest of the Sassy Boyz have a dancing/stripping routine that is truly breathtaking and sensual.

So, the biggest conflict in Dark & Dazzling by Elizabeth Varlet is that Connelly is a white knight and Z does NOT want to be rescued.  He is so strong and independent but Connelly really has a hard time not fixing all of his problems.  Z really has a bit of an attitude about it, though, which makes even the smallest attempt at rescue from Connelly really a huge deal.

The author created such a unique character in Z.  So determined and scrappy but the glitz and glamor makes a nice counter balance.  I must admit, the book took a turn a didn’t really care for.  Z goes to some pretty harsh extremes to try and make it on his own and the author doesn’t gloss over any of it.  Maybe I am more of a ‘rose colored glasses’ kind of person but the story line I think would have been fine without that particular plot twist.

The story turns dark for a while….Z loses his sparkle and goes from ‘fierce chihuahua’ with a sparkly side to someone who is desperate and angry.  Definitely a bit of a downer there.

Connelly was basically the white knight of the story.  Always trying to rescue Z, without regard to how he might feel about it.  He definitely could have handled things better but when he really screws up, he was so heartbroken I practically cried right along with him.

There are layers built upon layers in this story that I really enjoyed.  The relationship with Connelly and Z, the cases that Connelly and his partner are trying to solve, the drug issue at the club, the interactions between all the Sassy Boyz….it is really a well developed and well written story.

This was a rather intense story with plenty of drama and a romance that isn’t all hearts and flowers but that does (eventually) end in a HEA.  There are just a few dark parts along the way there.