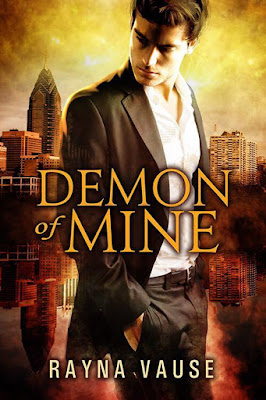 Demon of Mine
(Hell Inc Series #1)
by Rayna Vause

Climbing the corporate ladder can be hell….

As a Collections Demon, Zavier grants his “clients” one wish in exchange for their souls. His job sucks, but once you make a deal with Corporate South, they own you. The trouble is, Zavier’s not a very good Collections Demon, with his tendencies to spurn authority and find loopholes to help deserving clients out of their contracts. He’s under scrutiny from the head of his department, who would quite literally like to see him burn. He just needs to close a simple deal to get upper management off his back. Instead, he meets Ryan.

Ryan is desperately searching for a way to save his dying sister. He doesn’t believe in magic and demons, but he’s out of options. Zavier’s not what he expects in a demon, and even more unexpected is the strong sense of familiarity—very intimate familiarity.

While trying to free Ryan from his contract, Zavier discovers secrets unscrupulous even by South standards. Exposing them could cost Zavier everything, but it might be Ryan’s only hope.

Order Paperback Here
Excerpt
The
man dug in his pocket and pulled out a picture of a beautiful blonde woman
wearing a huge smile as she cuddled a newborn baby. “This is my sister, Maggie,
and her daughter, Mya. Maggie has cancer. Pancreatic, stage four. She’s
terminal.” He glanced at the photo, and grief flitted across his face before
determination chased it away. He handed him the image.
Zavier
took the photo but didn’t look at it. Instead he watched a mix of emotions
flicker over the man’s attractive face. His heart clenched with sympathy and an
odd sense of commiseration. A part of him recalled the pain of knowing that a
loved one’s time was running short, but he didn’t know why. As far back as he
could recall in his existence as a demon, he’d never lost anyone. This acute
identification with this man’s feelings made no sense.
“I
need you to cure her. I want her to have a one-hundred-percent clean bill of
health.”
Zavier
finally looked at the picture of the glowing woman and child. In that captured
moment she shone bright, happy, and full of life. “I imagine you must love her
a lot, but are you sure you really want to do this?”
“I’d
do anything for her.”
Tears
shimmered in the man’s eyes. He pressed the heels of his hands into them before
any could fall and took a deep breath. When he continued, his words turned
defensive. “Look, my mind is made up. I-I just want to do this and go home.”
Zavier
stared at the man, awed by his selflessness. No one this genuine had summoned
him in ages. It tugged at something inside him, warming him at the same time as
it annoyed him. Shit, here’s another one that’s going to bite me in the ass
and get me in even deeper with upper management. He hated these types of
cases. The selfish, stupid wishes, he granted without question, without a
qualm. But these types of cases, where no one really came out ahead in the end,
they got under his skin and made him detest his job a little more every time.
Zavier
wished he could help this man in some way without locking him into the soul
contract. If he could offer him this wish free of charge, he’d do it. The
Board, however, would have his hide. Pushing his personal feelings aside, he
did his duty, despite the sour taste it left in his mouth, and went about
claiming another soul for South.
“It’s
your life.” Zavier reached into his jacket and pulled out a packet of papers.
“You agree to sign your soul over to me. In return, I’ll give your sister a
clean bill of health. The cancer, along with any other medical issues she may
have, will be cured. Please understand, it’s not a ‘snap of the fingers’
situation. It will take some time for a full recovery. In a few weeks, you’ll
notice a marked improvement. Over the course of a year, the disease will
completely disappear.”
“Why
a year?”
“It’s
a protection issue—for you, and for us. Last thing we want are people—the
government, whomever—asking questions when sick people miraculously recover
overnight. It needs to look natural to a certain degree. Make sense?”
“Yeah.”
“Good.
Okay, moving on. You’ll have five years, and then I’ll come to collect. Use
your years wisely. If these terms are acceptable to you, we’ll seal the deal
with a handshake. At the same time, I’ll need you to verbally state your name
and accept the terms. Then you’ll sign on the dotted line. We clear?”
“No.
Yes. Contracts? Really? That seems awfully normal and more businesslike than I
expected, especially after the summoning spell. Nothing about this entire
situation is like I’d anticipated.”
“Yeah,
well. Like I said, we’ve upgraded a lot of our practices and traditions over
the years. Even demons have to update their methods from time to time. But, we
keep enough of our old ways to retain a hint of mystery and mysticism about
things. Don’t want to feel too corporate.”
The
man stared at him dumbfounded, and then his expression changed. Zavier watched
as the man gave him a long, analytical once over for the first time.
“Would
you like me to do a little turn for you? Give you a better look?”
“What?
No.” A slight blush spread across the man’s face. “It’s just—you aren’t what I
imagined at all. I envisioned something a little more Hellraiser and a little
less Ralph Lauren. With the juxtaposition of the magic and the paperwork, I’m
just having a hard time piecing it all together in my mind.”
Zavier
cocked his head at the man. “Still? I thought we’d addressed this a few minutes
ago. Look, let’s try this instead.” Zavier closed his eyes and called up a bit
of the darkness caged within. When he raised his lids, he let his inner demon
show through.
“Better?”
The
man gasped. “Uh, not really. No.”
“Whatever.”
Zavier huffed and snuffed out the fire, allowing his eyes to return to their
usual brown.
“Look,
don’t worry about it for now. You’ll find out about the inner workings of the
demon world soon enough.”
About The Author 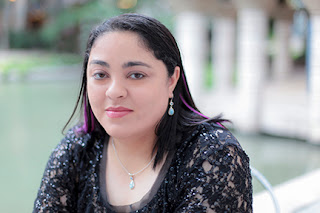 Rayna Vause loves to craft romances that mix a little action, a little adventure, and, often, a touch of the paranormal. She’s voracious reader and a perpetual student. Rayna has collected more degrees and certifications then she cares to admit and eventually she’ll probably earn a few more just because. She is a proud geek who injects a little bit of her geeky, tech obsessed soul into every story she writes.
When Rayna isn’t busy make up stories, she’s likely indulging her love of video games. Why? Because playing through the action, adventure, and romance in a role playing game is as good as reading a romance novel and is sometimes great inspiration for her writing. She’s a martial artist having studied American Kenpo Karate. She is also a Disney fanatic of epic proportions.
Rayna is a member of RWA, RRW, and a founding member of Liberty States Fiction Writers. She lives in southern NJ, just a bit outside of Philadelphia and shares a home with a cat who thinks she’s royalty.
You can find Rayna at