Finding Their Way by A.M. Arthur is book #2 in the Restoration series.  This is the story of Riley and Boxer, who have both led hard lives but are determined to put that behind them.  Figuring out their true nature and falling love isn’t easy but the happily ever after is SO worth it!  I received a copy of this book at no charge through Net Galley in exchange for my honest review.  All opinions expressed here are my own and this post contains affiliate links.

Finding Their Way by A.M. Arthur 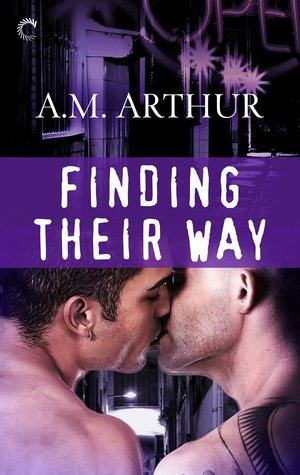 Thanks to an abusive father and a string of bad relationships, Riley McCage learned the hard way that people are not kind without a reason. Now, after landing a job at popular gay bar Pot O Gold, Riley is on the right track—until the night Boxer finds him drunk and drugged in the back room of an exclusive sex party.

Donald “Boxer” Boxwood wasn’t looking for anything beyond some casual kink until he peeled Riley off the floor and gave him a safe place to stay. But there’s something compelling about the guy crashing on his couch, and the two forge an instant friendship that eases into unmistakable attraction. Despite Riley’s hesitancy, Boxer knows one thing to be true: he needs Riley in his life.

Riley risked everything to run away and build a new life for himself, and his secrets aren’t something he’d ever wish upon his kind, gentle new friend. But when the past comes to call, he’ll have no choice but to put his trust in Boxer…and believe people can change enough to deserve a second chance.

I have read just about every A.M. Arthur book I have found.  The balance between drama, romance, friendship and sex just seems perfect in her stories.  Finding Their Way is book two of the Restoration Series.  You could read it as a standalone story, however getting to know the characters in her previous books is helpful since a lot of them make an appearance here, too.

Riley’s father turned into an abusive asshole after a tragic event when Riley was young.  After years of suffering from his abuse, Riley was kicked out and forced to find his own way in life.  Unfortunately, he made some bad decisions and had crappy taste in men.  His latest excuse for a boyfriend has him drugged and strung up in a sling at a private party when along comes Boxer to the rescue.

Boxer knew Riley as the bartender from his favorite bar and when he saw him unable to protect himself from an attempted rape, he had to get him out of there.  Boxer has a heart of gold and also has a tendency to take home ‘strays’ but his heart is 100% in the right place.  I honestly loved this character.  He is open, honest, protective and a wonderful friend to Riley.

Finding Their Way does have a bit of drama that fits right in with the storyline.  Riley’s ex becomes a real problem but nothing in the story sounds forced or over the top.

The secondary characters in the story are all enjoyable and familiar from previous books by this author.  They have their own drama to deal with and if you are not familiar with who is who already you might find it hard to keep track of them and their issues.

I was honestly surprised that Riley took such a liking to topping Boxer…he really didn’t come across as the dominant sort when he was first introduced.  But, his ‘coming out’ to his true self was well written and you could really see how much he enjoyed his new role in bed!

The progression of Riley and Boxer’s relationship is slow and I loved watching it unfold.  They are friends, they have their own lives, they have shared interests….and love comes naturally to these very well written characters.  Definitely a wonderful book!