Firebird with Totally Bound is both reworked and re-edited from its first time release. Although there are some changes to the story the characters are the same. This post contains affiliate links. 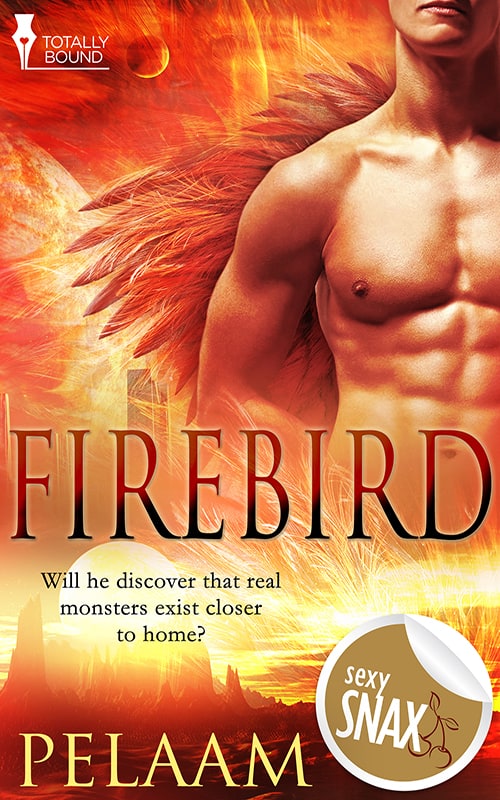 Living in clean, green New Zealand, Pelaam is a multi-published author of gay romance and erotica.

When not working at writing, Pelaam likes to indulge in her other passions of cookery and wine appreciation.

Cassian is the bait when his Monarch wants to trap a Firebird. Are Firebirds beasts, or will Cassian discover that real monsters exist closer to home?

Palace scribe Cassian is stunned when he’s called before his ruler, Great Monarch Maurus, to be the bait for trapping a Firebird—a dangerous predator and a beast of legend that lives high in the mountains of his country’s border.

As he climbs a mountain, Cassian is injured, but a Firebird rescues him. Cassian discovers that Firebirds are not animals. Instead, he uncovers Arturri, an intelligent being from another world, living as a castaway. But Cassian is helpless to prevent Arturri’s capture by Maurus’ dangerous and evil head of security, Phrixus.

When the secret beneath the palace is revealed, Maurus is more monstrous than even Cassian ever imagined. Who can Cassian trust? Can he save not only Arturri, but also the other prisoners of Maurus?

Notes from the author:

As a writer of sci-fi, I often get asked about world building. Where do my ideas for alien worlds come from? One of the exciting things about writing sci-fi is that your imagination can be set free, much like when writing fantasies. Before I can build the world, I need to decide upon the character. Then would that character fit into a world of desert or jungle, is the setting pre-industrial or futuristic? Many factors come into play before creating the world.

Although we only see two worlds in Firebird, I do introduce two other characters at the end who come from different worlds, but more of them later.

In Firebird, Cassian’s world is much like our own. There’s nothing alien about the way the world looks. I wanted Cassian’s country to be isolated as if an island where Arturri is effectively a castaway. To that effect, it’s surrounded by sea and mountains, keeping it tucked away from the rest of the world and so remains under the unchallenged dominance of Maurus.

Trapped high up in the mountains, Arturri doesn’t realize that the rest of the world is more enlightened and progressive, or even that some of his people are there. Despite the number of years he and his family have been missing, his people never gave up on finding them. Arturri’s home world has beautiful green spaces, blue lakes, and is open, prosperous, and civilized. Everything that Cassian’s country isn’t.

My love of science fiction and its wealth of worlds and peoples date back to my childhood. I loved watching old sci-fi movies and now collect horror and sci-fi DVDs from the 1930s-1960s. However, I got frustrated with the notion that the alien was always either the villain or a monstrous beast. That led me to decide there should be more of a balance — in my teens I created my own team of galactic travelers. A taskforce of six characters (only one of whom is fully human).

These characters evolved over the years and two of them, Xavier and Theophilous, make a brief appearance at the end of Firebird.  Xavier is reptilian his world has vast areas of desert. Theophilus originates from a world very similar to Cassian’s.

I love the freedom of working with fantasy and sci fi and these, along with paranormal and steampunk, will always be my favorite. 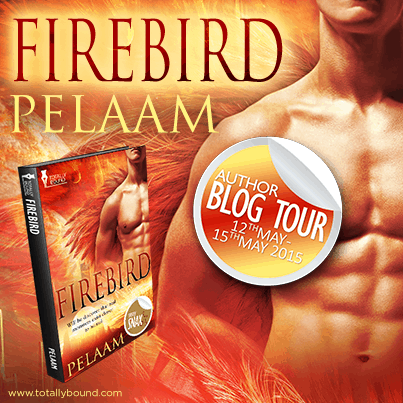 No one paid any attention to Cassian or Metod as they made their way to the underground laboratory. They wouldn’t need to pass the guards on the way back out as Metod had suggested getting out through the sewers. Cassian was impressed with the amount of detail Metod had gone into as the younger man explained his plans.

“I wasn’t going to just let her die. Not if I could help it,” Metod muttered angrily as they hurried to the laboratory. “I don’t care what my uncle thinks. I… I like Iria.”

“I love Arturri.” Cassian smiled at Metod. “I don’t care that he’s a Firebird. It’s not what he looks like on the outside that matters. It’s who he is on the inside. Anything else is just packaging.”

“I never thought of it that way.” Metod looked thoughtful as he mulled over Cassian’s words.

“I can promise you this much. Arturri is more of a man, more human, more civilized than Maurus or Phrixus and most of the guards in this place. He’s intelligent, caring and his people didn’t deserve what Maurus did to them. If there’s any justice in this world, he’ll pay for the atrocities they have suffered.”

Enter Totally Bound’s May blog tour competition for the chance to win an eBook of your choice! Not including boxsets or anthologies.