For a Rainy Afternoon by RJ Scott is a short and sweet romance interspersed with a bit of a mystery and some frustration over a difficult apple cake recipe.  Wrapped up all together it makes a nice read for a rainy afternoon!  I received one copy of this book at no charge from the author in exchange for my honest review.  This post contains affiliate links.

For a Rainy Afternoon by RJ Scott 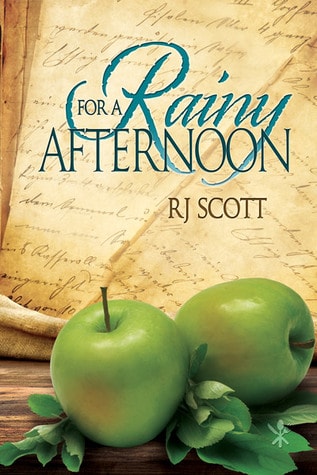 Robbie MacIntyre manages a small post office in the old Station House on the outskirts of sleepy Barton Hartshourn northwest of London. He’s stunned when the owner, Maggie, a close friend, bequeaths him not only the post office, but also Station House.

The rest of her estate is left to an American writer, Jason Young, and when he moves to the village, Robbie is thrown by the attraction he has for the man who has more of a claim on the Station House than he does.

Then there is a box that holds several rare first editions and a cookbook. Only when the secrets of the ingredients in a particular recipe are finally revealed does everything begin to make sense, and a love cut short seventy years earlier is finally discovered.

In the beginning of For a Rainy Afternoon by RJ Scott, Robbie is morning the loss of Maggie, a very dear friend.  She was a wonderful old woman who bequeaths to him the post office/cafe/corner store that he has been running for her over the last few years.  He is heartbroken at losing such a dear friend and frustrated that he cannot seem to perfect her apple cake recipe even though he has the recipe right there in front of him.

The remainder of Maggie’s estate has been left to a young American writer.  Jason has moved across the pond to finish writing a difficult book he is working on and has a bit of trouble with Maggie’s house in the form of a broken water tank.

Over the next few weeks, Jason and Robbie uncover a bit of a mystery in Maggie’s past.  They learn more about each other, dig into Maggie’s life, and try to master that frustrating apple cake recipe.

I really enjoyed the setting of For a Rainy Afternoon.  The quaint British village is off the beaten path and seems like a beautiful place to live.  The author describes it vividly and you can almost see the rolling hillsides and tiny little shops.

We don’t learn much about Jason’s backstory and I felt like I really wanted to know him better.  He comes from money and was working at a job he didn’t like.  He is writing a new type of book that is outside of what he normally writes but we don’t learn anything else about him.  Robbie was a bit more well developed and I really enjoyed his character.

You can really feel Robbie’s love for Maggie.  She might not actually be IN the story but you really feel like you get to know her as you read.  In fact, it seemed like there was an ‘otherworldly’ quality to the story…like maybe Maggie was nudging things along from the other side of the grave!

I enjoyed the cooking aspect of For a Rainy Afternoon and Robbie’s attempts at making Maggie’s apple cake are amusing.

I enjoyed both Robbie and Jason’s characters, although there is more of a focus on the mystery of Maggie and her recipe than there was on the development of the relationship between Robbie and Jason.  The romance was sweet and slow and gentle but I think I would have liked a bit more of them.  Not LESS of Maggie…just more of the romance.

Overall, though, For a Rainy Afternoon is a very nice story with a touch of romance, mystery and cooking all rolled into one.