A Forbidden Rumspringa by Keira Andrews is the first book in the Gay Amish Romance series. Let me just say that I picked this book up one morning and didn’t put it down until I finished it late that night.  In tears!  This is honestly one of the best books I have read in a long time!

A Forbidden Rumspringa by Keira Andrews 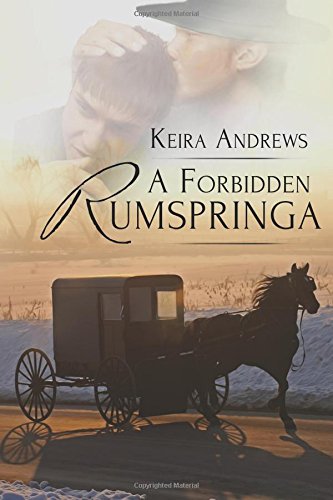 In a world where every detail of life–down to the width of a hat brim–is dictated by God and the all-powerful rules of the community, two men dare to imagine a different way. At 18, Isaac Byler knows little outside the strict Amish settlement of Zebulon, Minnesota, where there is no rumspringa for exploration beyond the boundaries of their insular world. Isaac knows he’ll have to officially join the church and find a wife before too long, but he yearns for something else–something he can’t name.

Dark tragedy has left carpenter David Lantz alone to support his mother and sisters, and he can’t put off joining the church any longer. But when he takes on Isaac as an apprentice, their attraction grows amid the sweat and sawdust. David shares his sinful secrets, and he and Isaac struggle to reconcile their shocking desires with their commitment to faith, family and community.

Now that they’ve found each other, are they willing to lose it all?

In A Forbidden Rumspringa you meet Isaac and David, who live in a very strict Amish community in Minnesota.  After a few teens went wild years back and died (David’s brother being one of them), their bishop decided that the Amish community they were currently living in had gotten too permissive and they left to live a plainer life.  Zebulon, where they currently live, is struggling financially due to the strict rules put in place by the bishop.  The ‘youngies’ (teenagers) are not allowed a Rumspringa to explore the English world and the rules of behavior are rather strict and stifling.

Isaac is only 18 but he has no interest settling down with any of the girls like a ‘good Amish boy’ should.  However, he gets flutters in his stomach every time he sees David, the slightly older carpenter he is sent to work with. David, being older and having had more experience with ‘English’ ways, understands why he is different.  He knows what those flutters in his belly mean when he looks at other guys.  But, gay isn’t even a word that is even MENTIONED in Zebulon.  He tries hard to focus on his carpentry and ignore the things he feels when Isaac is near.  However, they finally give in to temptation and the passion between them is out of control.

Isaac and David are inseparable, even though they have to hide what they are doing.  They are in love…it is sweet and sexy and romantic and I just had to smile every time they were together.  It was heartbreaking to know that they had to hide and that their future together seemed so bleak.

A crisis forces things to a head and David and Isaac can no longer be together.  I don’t want to give away any spoilers but suffice it to say that their is guilt and sorrow and internal struggles that left me with tears running down my face.  While these two will eventually find their way back to each other, you won’t get a happily ever after in A Forbidden Rumspringa since there are two more books in this series.

I will say that I have always been fascinated with the Amish culture and Ms. Andrews did a fabulous job at painting a mental picture of Zebulon and the Amish culture.  There was so much detail about the Amish way of life included in this story that it is clear that a huge amount of research was done before writing this book.  You could almost feel the bishop’s beady eyes watching over the ‘youngies’ just waiting for them to stray from the rules put in place by the community.

I cannot say enough good things about A Forbidden Rumspringa.  The characters are well thought out, the setting incredibly detailed, and the story will tug at your heart strings.  A truly amazing read that you will not want to put down!