In Hesitant Heart by Morticia Knight, a wealthy and sophisticated man falls for a complete innocent.  Will his darker desires drive away his chance at true love? 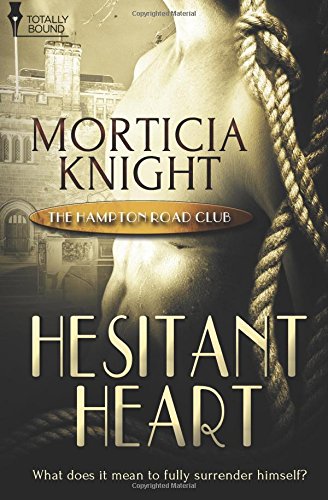 Eighteen year-old Sam Cunningham is used to living with lots of secrets. He’s had to hide his true nature his entire life or else incur the wrath of his strict and abusive father. When he’s faced with a horrible ultimatum, he flees to Hollywood where he hopes he can escape the fate his father has planned for him.

Aaron Rubenstein is a wealthy and sophisticated man who loses himself in painting portraits of bound men to help stave off his loneliness and despair. Unable to find a lasting connection with anyone, he’s had to resort to paying lovers not only for their affections, but to be allowed to indulge in his darker passions. Aaron’s only respite is his nights at the Hampton Road sadomasochism club where he’s a respected Dominant.

Naïve and inexperienced in the ways men can please one another, Sam takes a job at a bathhouse where he first glimpses a beautiful older man. Aaron notices the sweet towel boy watching him with interest every time he patronizes the Temple of Eros bathhouse. A traumatic incident for the innocent towel boy triggers Aaron’s protective tendencies and he’s compelled to rescue the gentle Sam from the clutches of the Temple’s manager.

They embark on a journey together that teaches them both things about themselves that they never knew. As their bond deepens and Sam is trained for his first night at the Hampton Road Club, an unknown danger lurks. Will Sam’s father find him and destroy both men’s chance for true happiness together? Or will Aaron protect his boy and keep him for always?

In Hesitant heart we first meet Sam, an incredibly innocent young man trying to survive in the bath houses of 1920’s Hollywood.  He is willing to work hard to support himself but has absolutely no idea what he has gotten himself into in this less than reputable job.

Aaron is the beautiful older man who frequents the bathhouse that Sam works in.  Aaron feels incredibly protective of the sweet young man who keeps watching him.  Circumstances force Aaron to rescue Sam from his unsavory surroundings and he begins introducing Sam to the darker passions that he enjoys.  But, Sam’s father is determined to reclaim his son.  By force if necessary.

Sam was incredibly innocent…just a bit too innocent for my liking actually.  This book takes place almost 100 years ago and Sam was raised in an incredibly isolated family by a rather dominating and abusive father.  But not even knowing the proper terminology for the parts of his body, much less what actual sex involved was hard for me to comprehend.  It totally fit with the story line but just wasn’t something that really appealed to me.  Part of me wanted him to be more experienced before finding Aaron and entering into a BDSM relationship but I was happy that Aaron was so patient and discussed everything they did with Sam before and after it happened.

Just knowing Sam’s family history, you KNOW what the climax of the story is going to be.  Sam’s father is not the type of guy to just let his son leave.  I thought the way that Aaron and Sam handled the situation was quite creative…I won’t spoil the surprise for you by saying more!

The one thing that kept me from really falling into this book was the formality of the writing.  It was written well in terms of the time period and the fact that Aaron is wealthy and privileged but it just seemed a bit too stiff and formal for my liking.