I am happy to be a part of the blog tour for Hiding in Plain Sight by Ethan Stone.  This is an engaging romantic murder mystery that will keep you guessing all the way until the end of the book. Javi and Ethan have a history together and when Javi ends up in bed with a dead man, he seeks Ethan’s help.  Keep reading for more information about the book, an excerpt, my review and even a giveaway over at Pride Publishing.     I am including affiliate links to purchase the book if it catches your eye! 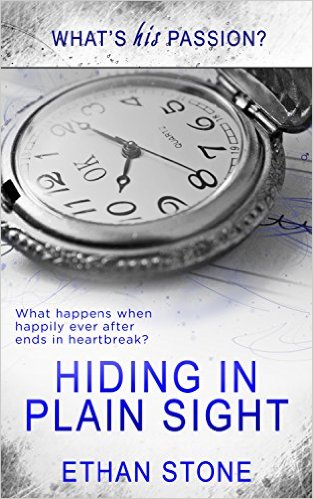 A Note from the Author:

Hi everyone, Ethan Stone here! Welcome to day one of my blog tour to celebrate the release of Hiding in Sight, a What’s his Passion? title.

There are some amazing TV shows out there and more than one make me wish I could rewrite them into an M/M romance. One of those shows is Strikeback, a kick-ass action show with some of the most incredible stunts I’ve seen on television.

Stonebridge and Scott definitely have a bromance. They start off suspicious of each other but the enmity becomes respect. Over the time they work together they soon become very close. They know they can always depend on each other. At the end of the series they even drive into the sunset together, just not in a romantic way.

With just a few changes, it could be an awesome gay romance. Well, I’d say bisexual because Scott could still be a horndog with women and see something different in Stonebridge. Stonebridge would be closeted and eventually outed by Sullivan.

Watching the two alpha males battle it out would’ve been awesome! And I don’t mean just in the bedroom. The way they take out bad guys would be enhanced that much more because of their strong chemistry. They’re first time in bed would’ve been after a battle in which Stonebridge risked his life and Sullivan is furious. The argument would turn physical and soon they’re rolling around on the floor and Sullivan realizes he has a boner. You can imagine what happens from there.

You know, I bet there’s fan fiction out there of exactly this.

Now for the M/M Romance I can control

Ethan Stone has recently returned to Oregon and is working on re-growing his web feet. He has been obsessed with two things in his life: books and all things gay. After spending years trying to ignore the voices in his head, he finally decided to sit down and listen to them.

What he discovered was a perfect union of his two obsessions. Ethan used to have a day job that paid the bills. He wore a uniform to work and he looked damn sexy in it. Now he gets to wear sweatpants and watch movies all day.

What happens when happily ever after ends in heartbreak?

After surviving a harrowing ordeal in Las Vegas, Javi Campos and Adam Brand seemed destined for a lifetime of love. However, life and insecurities got in the way, and Javi left, nearly destroying Adam in the process.

They’ve spent ten years apart, but circumstances bring them together again. Now a personal escort, Javi is terrified when his companion for the evening is killed in the bed they shared. As the obvious suspect, he turns to the only man in Portland he knows he can trust…his former lover, Adam.

Adam is shocked to hear from Javi, but he believes in him and agrees to help. The investigation takes them into the backstabbing world of Big Pharma as well as the religious homophobic culture of Russian Old Believers. While attempting to find the real killer, Adam and Javi have no choice but to deal with their lingering feelings for each other.

The situation might be the catalyst they need to finally find their long-awaited happily ever after. But first they have to solve the case before either one of them becomes the next victim.

Hiding in Plain Sight by Ethan Stone is actually part two of the Vegas Hustle series.  The two main characters have a history, but the author does a great job of filling in their back story so you can read this as a standalone novel.

Javi has woken up next to a dead man and the only thing he knows for sure is that he didn’t kill the guy.  He seeks out Ethan for help and the story that unfolds is a wonderful balance of renewed romance and intriguing mystery.

Javi’s character is quite interesting and I find myself wondering more about him as the story unfolds.  You can tell he truly cares for Ethan and regrets leaving him years ago but felt that he had no choice. Javi’s history with Ethan is given to the reader in bits and pieces, which worked to keep the mystery itself as the major plot focus.

Ethan seemed like a good guy, although one that was incredibly hurt by Javi’s betrayal.  He is hesitant to expose his heart again but truly feels that Javi is his soul mate and they are meant to be together.

The mystery itself if the major focus of the story and it was captivating.  I won’t go into the who’s and why’s and spoil the story but I will say that there is a bit of a twist at the end that you won’t expect but that makes a lot of sense.  Great, engaging story to keep you turning the page.

The author has created a great story and if you like a little mystery and romance blended in just the right amount, you will love Hiding in Plain Sight by Ethan Stone. 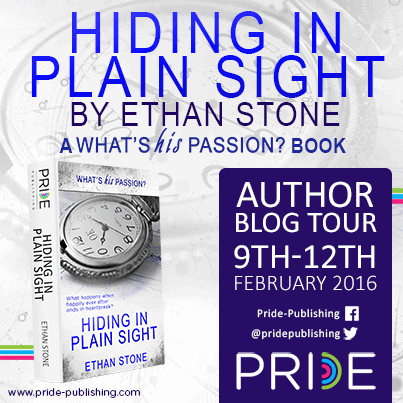 The following excerpt from Hiding in Plain Sight takes places shortly after Javi has returned but before they’ve had a chance to discuss the past:

When I finished the call I glanced out of the window and noticed a movement in the garden. There weren’t any lights outside but the moon was bright enough to see it was Javi. He lay on the grass looking into the sky. I watched him for a few minutes, marveling at the beauty of his shirtless body.

I turned and rushed down the steps, but stopped at the bottom of the stairs. Going left meant returning to my bedroom, but I could go right, stride out of the back door and join my ex.

My brain was unsure what to do but it seemed like my feet knew exactly what they wanted. I turned, ambled down the hallway and left the house. The grass was cool on my bare feet and the night air invigorating.

Javi sat up when he heard me coming and smiled when he saw me. “Hey, Champ.”

That had been his nickname for me, just as I had called him Romeo. Romeo and Champ were comic book characters who had bonded and fallen for each other while on the run, just as Javi and I had done in Vegas.

I said nothing as I sat on the grass next to him and lay back. He reclined on one elbow and drank me in, though I avoided making eye contact.

“Beautiful, so fucking beautiful,” he murmured.

I glanced over and our gazes locked.

“You are beautiful, Adam. You were always good-looking, even when you were skinny like when we first met. But now…” He whistled. “All these muscles. Such great definition.”

I didn’t reply. I had no idea what I should say. He put a hand over my chest but didn’t touch me, instead letting it hover there. Heat radiated from him, making my insides warm and my shaft harden. He moved his hand but didn’t touch me, instead allowing it to float just barely above my flesh. He might as well have made contact. It felt as if he was. I could feel his grip, his soft skin. Goosebumps formed all over and a shiver overtook me.

Javi straightened his arm and peered down at me. His expression was so fucking intense I couldn’t tear my eyes away. Slowly he lowered himself until he was a fraction from my lips. Javi held there for an instant, waiting for me to tell him no, and when I didn’t he closed the distance.

It was magical kissing Javi again. Strong and passionate. Tender. Loving. I opened my mouth, allowing his tongue to sweep inside. He tasted the same. He smelled the same. But it wasn’t the same. The pain and hurt he’d caused me came rushing back in a flood of emotion and I shoved him off me. I leaped to my feet and glared down at him.

“No, this isn’t happening! You aren’t going to seduce me then run out on me. Not again. Not ever.” The sadness was as fresh as the day I’d found the note. No matter how much I loved him, I couldn’t deal with that again.

“Adam, wait.” Still on the grass, he grabbed my ankle, but I yanked it away.

“No. I waited for you for a long time, but not anymore.” I spun and strode away from him.

In my room, I crawled under the covers, hugged a pillow and slept. 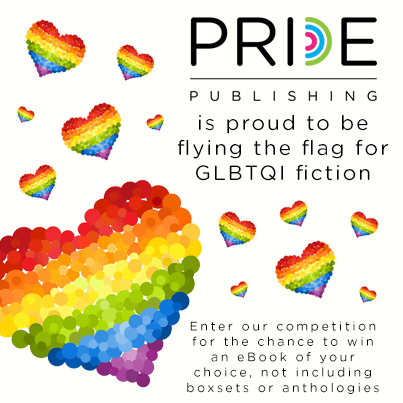 Enter Pride Publishing’s monthly competition for your chance to win a free eBook of your choice! (Not including boxsets or anthologies.)