How to Howl at the Moon by Eli Easton is a sweet and lighthearted shifter story with a bit of a twist.  A fun read with just enough angst to keep you turning the pages. This post contains affiliate links.

How to Howl at the Moon by Eli Easton 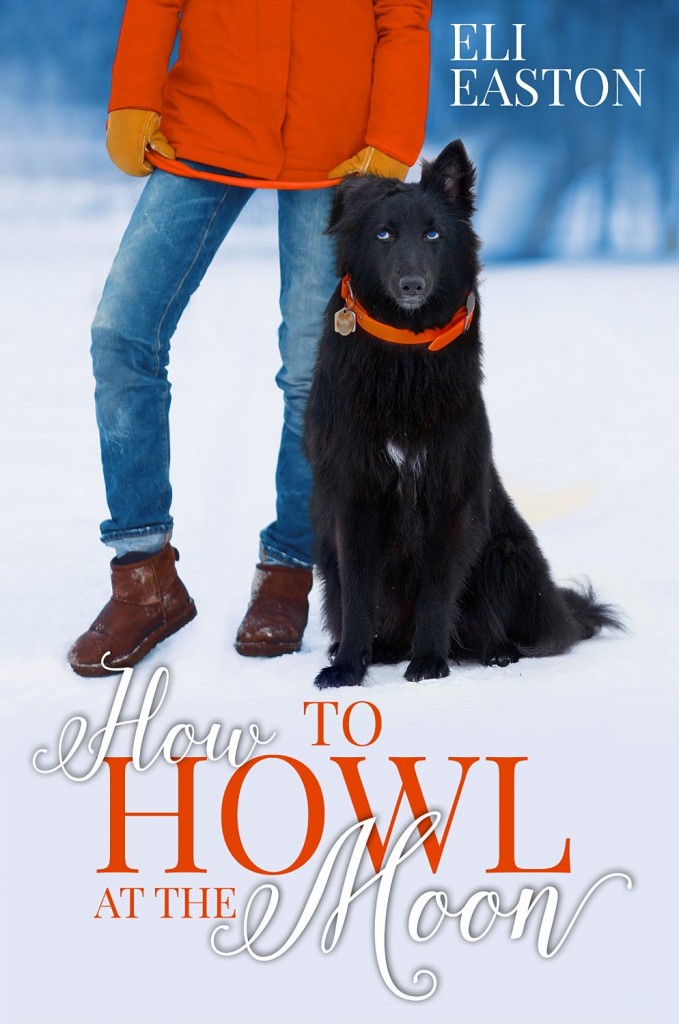 Sheriff Lance Beaufort is not going to let trouble into his town, no sir. Tucked away in the California mountains, Mad Creek has secrets to keep, like the fact that half the town consists of ‘quickened’—dogs who have gained the ability to become human. Descended on both sides from Border Collies, Lance is as alert a guardian as they come.

Tim Weston is looking for a safe haven. After learning that his boss patented all of Tim’s work on vegetable hybrids in his own name, Tim quit his old job. A client offers him use of her cabin in Mad Creek, and Tim sees a chance for a new start. But the shy gardener has a way of fumbling and sounding like a liar around strangers, particularly gorgeous alpha men like Sheriff Beaufort.

Lance’s hackles are definitely raised by the lanky young stranger. He’s concerned about marijuana growers moving into Mad Creek, and he’s not satisfied with the boy’s story. Lance decides a bit of undercover work is called for. When Tim hits a beautiful black collie with his car and adopts the dog, its love at first sight for both Tim and Lance’s inner dog. Pretending to be a pet is about to get Sheriff Beaufort in very hot water.

How to Howl at the Moon by Eli Easton is really an adorable twist on a shifter storyline.  The ‘shifters’ in this book are actually dogs.  If a bond between dog and human is strong enough, a dog can become ‘quickened’ and turn into a human.  These quickened dogs make up a large part of Mad Creek and this is not public knowledge to the general population.

Tim has fled his past life as a plant geneticist after a fallout with his boss.  He is penniless, homeless, and extremely grateful when his friend Linda lets him use her cabin in Mad Creek and her greenhouse in exchange for developing a rose hybrid for her.  He has 6 months to create this rose masterpiece and get his organic fruit and vegetable business off the ground before he is out on his ear again.

Sheriff Lance Beaufort is the sheriff of Mad Creek and a 4th generation ‘quickened’ collie.  At their first meeting, Lance senses that Tim is trouble so he decides to do some snooping.  His dog instincts tell him Tim is a goodhearted person but his human instincts keep getting in the way.

I loved both of the main characters in How to Howl at the Moon by Eli Easton.  Tim was sweet and shy and awkward but decidedly feisty when push comes to shove.  He is passionate about his seeds, his fledgling business, and his new ‘pet’ collie that he names Chance. The bond between them was strong and I really wanted him to succeed at his rose hybrid project.

Lance Beaumont is perfectly represented in collie form on the cover of the book.  The look in the dog’s eye that says ‘Really?  What have I gotten myself into?” is exactly what he keeps asking himself every night when he shifts and heads back to Tim’s house.  His inner dog WANTS Tim, physically, emotionally, and permanently.  The author did a great job of portraying the struggle between the dog’s instincts and the human’s.

The story line about the drug traffickers  was realistic enough to really fit nicely into the story.  There were some great secondary characters as well.  So much so that I really hope there is more coming after this book.  Roman the German Shepherd really needs a new ‘master’ and the drug trafficking business that surrounds Mad Creek cannot possibly be conquered yet!

If you are looking for a lighthearted shifter story with a touch of humor I think you will really enjoy How to Howl at the Moon by Eli Easton!