How to Train Your Dom in 5 Easy Steps by Josephine Miles was a wonderful pairing of a cheeky and confident sub with a Dom who was still learning the ropes, so to speak!  It was both heartwarming and frustrating as the two characters struggled to turn a tutoring session into a lifetime commitment!

How to Train Your Dom in Five Easy Steps 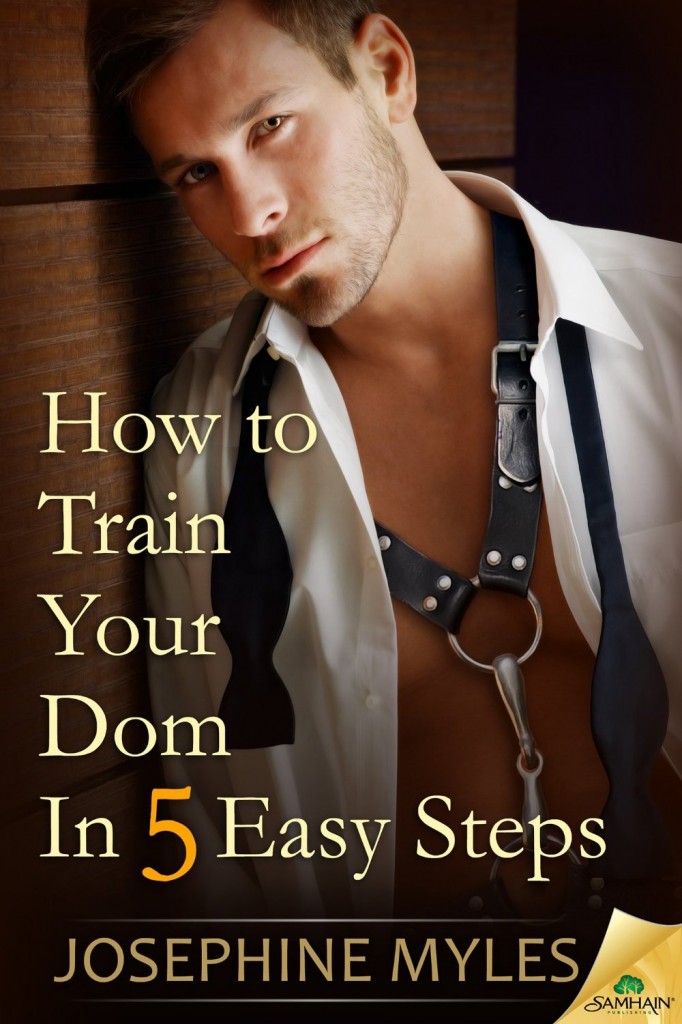 Purchase Link (affiliate link!—>>>): How to Train Your Dom in Five Easy Steps

Jeff White’s needs are simple. All he wants is a submissive to help him explore the dominant side that his ex-girlfriend couldn’t handle. Problem is, inexperience in both dating and domming has resulted in a string of rejections.

What he needs is an experienced sub willing to show him the ins and outs of controlling a scene. Unfortunately, the only one willing to take him on is male, and Jeff is straight. One hundred percent, never-gonna-happen straight.

Easygoing painslut Eddie Powell doesn’t care that Jeff is younger, working class, and shorter. Eddie likes a bit of rough, and Jeff fits the bill perfectly. The trick will be convincing him to follow Eddie’s five-step training programme—which would be easy if Eddie wasn’t starting to have feelings for the rough-around-the-edges landscaper.

Once Jeff lays his hands on Eddie, things definitely get out of hand. But it’ll take more than hot, sweaty, kinky sex to persuade him to come out of the closet—especially to himself.

Warning: Contains a happy sub, a confused Dom, a high ratio of sex to plot, misuse of root ginger, and a suitcase of kink. Written in Jo’s usual exceedingly “English” English.

Our other main character is Eddie. He is a happy, confident and slightly cheeky sub who knows his way around a room full of cuffs and floggers.  He knows exactly what trips his trigger in the bedroom and isn’t shy about telling his doms exactly what to do.  In a very polite and sub like way, of course!  When he hears that Jeff is looking for a sub he doesn’t even blink when he realizes that Jeff is totally straight.  Eddie will change that and have fun trying!

I loved both of these characters and even though they seem to be total opposites, they really work well together.  Jeff is gruff and silent and a little insecure but taking direction from Eddie seems to be fairly easy to accept.  Once he gets past the whole “Eddie is a gay guy” concept!  Eddie loves the strong, silent type and really gets off on Jeff’s rough around the edges mannerisms.  But, he keeps telling himself that looking at Jeff as long term relationship material is a mistake.  That doesn’t stop his heart from falling hard for his new dom, though!

I will say that humiliation has never been my ‘thing’ when it comes to sex but the author did a very good job writing it into this book.  Eddie KNOWS it is something that he really enjoys and Jeff is a bit hesitant at first to be so crude with him.  After a bit of discussion on both sides, they both figure out what the other needs when it comes to sex and the result is definitely HOT!  If they could only figure out the relationship part of things as well as the sex they would be all set!

I wanted to throttle Jeff over his pigheadedness when it came to finding a long term ‘mate’.  So many times he kept saying that Eddie was perfect…but darn, he wasn’t a girl!  And Eddie’s fear of rocking the boat basically meant Jeff could continue his ignorant line of thinking WAY too long!

How to Train Your Dom in 5 Easy Steps has two well crafted characters, a gay for you story that I absolutely loved, a cheeky sub who made me smile and a gruff bear type who was too stubborn to see what  was right in front of his face!  Definitely a keeper and one I will be reading again!