In the Distance is an incredibly well written account of two men falling in love.  Despite their slightly annoying friends, massive trust issues and the 2000 miles that separates them.  I received one copy of this book at no charge through NetGalley  in exchange for my honest opinion.  This post contains affiliate links.

In the Distance by Nikka Michaels and Eileen Griffin 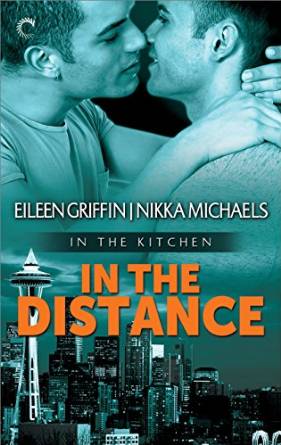 Tyler Mitchell has worked hard to rebuild his life after his family kicked him out. A culinary student and sous chef who spends his spare time volunteering with kids, he’s happy enough even though he has no time to consider a relationship.

Trevor Pratt is finally getting over losing the one person he wanted to spend the rest of his life with, but it’s taken screwing every cute guy in Manhattan to get there. He’s vowed to repair the friendship he broke along the way, but that’s hard to do when his friend’s new employee catches his eye. Despite being warned to stay away from Tyler, Trevor turns on the charm.

Romance is a terrible idea. Trevor is ten years older and a relentless playboy. Tyler is still unsure of his place in the world. Neither of them is ready for life-changing love, but as things heat up, their chemistry in the bedroom might just take that decision out of their hands.

In the Distance is the third book in Nikka Michels & Eileen Griffin’s “In the Kitchen” series.  I have not read the previous books but was able to follow the storyline quite easily.  I did wonder about the previous characters and their earlier interactions so I will have to go back and read the others to find out why Ethan and Trevor hate each other so much!

In the Distance is all about Trevor and Tyler falling in love.  Tyler is young (only 20) and a sous chef  in Ethan and Jamie’s restaurant.  After getting kicked out of his home for being gay and living on the streets, he has some major trust issues.  He is incredibly grateful for having been given a second chance in life but is lacking in self confidence.  I will say that his character was a bit two sided in this book.  In some ways he is incredibly mature…supporting himself, going to school, working a job and planning for the future.  However, many of his interactions with Trevor are incredibly immature.  Due to his age and lack of relationship experience, I am not surprised but the dichotomy threw me a bit.  He jumps to conclusions far too quickly about Trevor and gives him the cold shoulder on a number of occasions.

Trevor is a fairly wealthy playboy but he has his good qualities.  He works in public relations and marketing, even though he has enough money to support himself without working at all.  Generally, he seems like a really nice guy…just one who has no desire to settle down.  Tyler is a temptation that he has been warned to stay away from but just can’t help himself.  I like that they become friends first and that nothing is too rushed.  The book focuses on the falling in love and the developing of their relationship rather than them jumping into bed.

In the Distance highlights the issue of homeless GLBTQ youth in the city.  Tyler lived on the streets and in homeless shelters until someone gave him a chance at a new life.  Jamie, Ethan and Tyler continue to work in the shelter as volunteers and I would love to learn more about Nick, one of the homeless teens from the shelter.  I love the ‘pay it forward’ mentality that prevails in this story.

Both Trevor and Tyler mature a LOT from the beginning of the story to the end.  They grow as individuals but they also grow together as a couple.  The story is told from both main characters’ POV so you really get inside their heads throughout the whole book.  The kitchen setting was a huge perk for me as a foodie and the descriptions of some of the dishes made my mouth water.

I really enjoyed In the Distance and am so glad that Tyler has an adoptive ‘family’ to love and finally decided what he wanted to do in life.  There is a wonderful HEA and I finished the book with a smile.