In the Middle of Somewhere by Roan Parrish is a love story between a city boy and a country boy.  Unfortunately, neither one of them is all that great at trust, commitment, or communication which makes falling in love a bit of a challenge.  This post contains affiliate links.

In the Middle of Somewhere by Roan Parrish 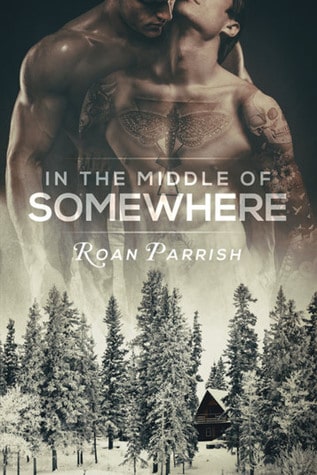 Daniel Mulligan is tough, snarky, and tattooed, hiding his self-consciousness behind sarcasm. Daniel has never fit in—not at home in Philadelphia with his auto mechanic father and brothers, and not at school where his Ivy League classmates looked down on him. Now, Daniel’s relieved to have a job at a small college in Holiday, Northern Michigan, but he’s a city boy through and through, and it’s clear that this small town is one more place he won’t fit in.

Rex Vale clings to routine to keep loneliness at bay: honing his muscular body, perfecting his recipes, and making custom furniture. Rex has lived in Holiday for years, but his shyness and imposing size have kept him from connecting with people.

When the two men meet, their chemistry is explosive, but Rex fears Daniel will be another in a long line of people to leave him, and Daniel has learned that letting anyone in can be a fatal weakness. Just as they begin to break down the walls keeping them apart, Daniel is called home to Philadelphia, where he discovers a secret that changes the way he understands everything.

In the Middle of Somewhere by Roan Parrish is truly a love story…with all the angst, stress, miscommunication, and sexual exploration that goes along with falling in love.

Daniel comes from a very poor and honestly pretty crappy family life.  He has managed to work his way through a Ph. D program and needs a job desperately to pay off his mountain of student loan debt.  The only thing he is offered is in very rural Michigan and his interview trip ends up resulting in a clash collision with a dog and a mountain of a man.

Rex has been hiding out in rural Michigan for years and keeps to himself.  His encounter with Daniel is a brief yet explosive blip in his life. Fast forward 6 months, and Daniel is back in town working at the local college.  These two men are drawn to each other but have some serious emotional hangups that make falling in love incredibly difficult.

I loved Rex…he was a shy and gentle giant who just wanted to care for every one of Daniel’s needs.  His need to care for others masks a very real fear that everyone he DOES care for will eventually leave.  His character was kind of this warm, fuzzy, bear that was always slightly insecure.

Daniel’s character was a little harder for me to like or understand.  He was this odd mix of incredibly intelligent English professor and flighty, emotional train wreck.  I had a hard time figuring out how someone who has such difficulty expressing himself could possibly be an English professor.  Of course, I guess there is a huge difference in writing a thesis paper and being able to verbally express your emotions.  But, it just seemed a little off to me for some reason.

In the Middle of Somewhere is a very long book and I think some of the verbiage could have been cut back a bit.  There are many, many scenes where Daniel goes off into his own head and you get to read all those mental meanderings over and over.  While it gave good insight into his character, it also made me want to skim over quite a bit of the story.  The book is only told in Daniel’s point of view and I would have liked to see Rex’s inner dialogue a bit, too.  I think that would have made Daniel’s head space a little less intrusive.

These two men definitely have a lot of chemistry and the sex is steamy hot. Very well written and not so frequent that it takes over the story.  I loved the secondary characters in this story.  They were unique and really added a lot of interest to the story itself.  I will say that the author ends In the Middle of Somewhere just as we are about to move into Daniel’s brother Colin’s story.  Frankly, I think Colin was an ass and I’m not sure I really care to hear his story.  On the other hand, Will and Leo would make an adorable second book in this series!

In the Middle of Somewhere is a good, solid story and the writing itself is wonderful.  Getting out of Daniel’s head and into Rex’s occasionally would have made this much more enjoyable for me but I definitely think it was worth buying.  I will be looking out for the next book by this author.