Jefferson Blythe, Esquire by Josh Lanyon is about old maps, new adventures, getting lost, getting found, getting drunk, and being mistaken for an international criminal.  I received one copy of this book at no charge via Net Galley in exchange for my honest review.  This post contains affiliate links. 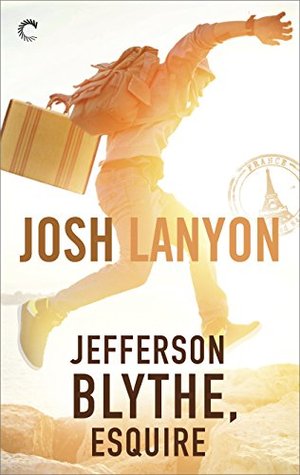 Fresh out of college and recently dumped by his long-time girlfriend, shy and bookish Jefferson Blythe is touring Europe using an inherited vintage copy of Esquire Magazine’s Europe in Style.

Jefferson Blythe, Esquire is about old maps, new adventures, getting lost, getting found, getting drunk, and being mistaken for an international criminal. In other words, normal summer vacation when you’re in your twenties.

In Jefferson Blythe, Esquire by Josh Lanyon, we meet Jefferson Blythe who has just graduated from college and been dumped by the girl he intended to marry.  He does not want to be an architect but can’t seem to find the courage to tell that to his parents who apparently think that is what he should be.  He spends the money he saved for his girlfriend’s engagement ring on a whirlwind trip to Europe. His grandfather seems to think the trip is vital for him at such a crossroads in his life.  He is bringing along an inherited vintage copy of Esquire Magazine’s Europe in Style.  He hopes to have the adventure of his life and he certainly does, although it isn’t quite what he expected.

Without giving away the mystery of the story, Jefferson becomes part of a very elaborate hoax involving a stolen egg, criminals, and a whole lot of money. It’s a unique mystery with some interesting tidbits, although I found myself getting a bit confused over the who’s who and what are they doing parts of the story.  It gets a bit complicated at times and I had to reread several things to get the facts in order.

Jefferson Blythe, Esquire is not really what I would call a romance.  Jefferson is our main character.  His friend George lives in London and they haven’t seen each other in 4 years.  Apparently the last time they saw each other, George told Jefferson he was gay, there was some big misunderstanding about whether Jefferson was gay, they argued and now George is in Europe in some sort of intelligence business.  The history there was a bit confusing too.

Honestly, for the first half of the book, I don’t think the two characters where in the same room as one another for more than a few hours.  I think they had a brief and tepid kiss goodbye at about 60%.  There was a very clinical and rather passionless interlude at about 75%. I felt like these two characters had absolutely zero chemistry, and not just the fact that there were no detailed ‘naughty bits’ actually written on page.  There can be plenty of spark without the fire, you know?  There was no spark. Zip.

Jefferson Blythe, Esquire by Josh Lanyon is a uniquely thought out mystery.  There is a ton of travel and historical information woven into the story but I found myself getting confused occasionally with everything going on.  And, honestly, Jefferson is either incredibly naive or borderline stupid for getting himself into some of the situations that he does.

I know there are a LOT of people who love Josh Lanyon’s books and I have read a few that I enjoyed but this one was not a hit for me.