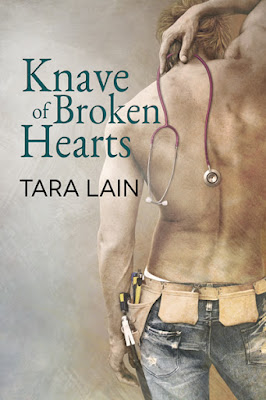 Jim Carney has a full time job—running from himself. Since he walked out on his wealthy family at sixteen because he’d wrecked his best friend’s life over some yaoi graphic novels, Jim has lived a macho, blue-collar existence of too much booze and too little responsibility. Then Billy Ballew, the man Jim most admires, gives Jim a chance to come through as his construction supervisor. For once, Jim is determined to make someone proud. Then Jim goes in for a physical for his new job and his yaoi dream comes to life in the form of cardiologist Ken Tanaka. Jim discovers he has two heart problems—a wonky mitral valve and a serious attraction to his doctor. But Ken is a major player, and Jim might be just a notch on the doc’s stethoscope. To Ken, Jim is unforgettable—but the living embodiment of his traditional family’s worst nightmares.

How come the minute Jim decides to be responsible, he finds himself taking care of his kid brother, getting a proposal from a wealthy woman, making a deal with the devil, and winding up in the hospital—when all he really wants is the Knave of Broken Hearts?

Paperback from Dreamspinner
Excerpt
“Jim?”
He looked up at
Ken Tanaka standing in the door to the inner office. The doc came to get Jim
himself.
“Are you okay?
You look upset?”
“Oh no, not
exactly.”
“Want to come
in?”
“Sure.”
He stood and
walked through the door, inhaling Tanaka’s spicy/sweet scent that filled his
head like smoke. God, he felt disoriented, like he didn’t know which world he
lived in—one where he went out on dates with a rich woman, or one in which he
gazed into the beautiful eyes of Yaoi Man and got a hard-on. Hell, both of them
had to be fantasyland.
Ken motioned him
into a private office that wasn’t an examining room. “Please, take a seat.”
Jim sat in a
guest chair in front of Ken’s desk, and the doc walked all the way around to
sit in his big leather chair. Very professional. Very distant. Very not a good
sign. “So I got back the results of your echocardiogram.”
“Yeah?” Shit,
they should take another test right now. The way his heart hammered in his
ears, he’d sure as fuck fail.
“Your mitral
valve prolapse is what I would call moderate to severe. It’s difficult to tell
exactly without doing surgery.”
“Surgery?” Close your mouth, idiot.
“Yes, that’s how
a severely, shall we say, floppy valve is corrected.” He smiled tightly.
“Floppy?” It came
out like a squeak.
“I’m not
recommending surgery now. We’re going to observe over the next few months. I
want you to let me know any problems, arrhythmic heartbeats, racing heart,
chest pains, anything irregular that might occur, okay?”
Shit, all of that
was so regular for him, and he was so not going to tell Tanaka that. He nodded.
“Don’t worry.
Mitral valve prolapse is quite common. Most people never have any real
difficulty. Just follow my directions. Don’t drink excessively, eat healthy
food, even organic would be advisable, and avoid stress.”
Jim’s mouth
opened, then closed. He was okay on the drinking thing so far, although this
news made him want to down a bottle of Jack. Still, on the other stuff, the doc
might as well say fly to the moon and bring back some green cheese. Hell, even
being around Tanaka could give him a fucking heart attack. Sitting here
thinking he might die any moment, and his cock still wanted to escape his jeans
just from looking at the doctor’s lips. Maybe that’s how he’d go out. Lean over
and kiss Ken Tanaka. Bye-bye, Charlie.
“Does that all
seem doable?”
Jim nodded.
“Does, uh, that mean I don’t get the insurance?” Jesus, that would be bad.
“No. As I told
you, mitral valve prolapse is common. I’ve signed the papers and turned them
in. You should get the approval with no problem. You’re officially no longer a
patient.”
That felt both
good and bad. “Thanks, man.”
“My pleasure. As
I say, it’s not an inherently worrisome diagnosis.” Ken sat back in his chair.
“So you’re hooking up with our sexy landlord, huh?” He smiled, but something
seemed phony about it.
“Uh, no. She was
just talking to me about how to build out her suites. And she, uh, has some
more work for us.”
Ken stood and
walked toward the door of his office. “I don’t know, buddy. I’d look out for
her. You could find yourself hooked.”
Buddy? Seriously? “I won’t worry too
much. You told me to avoid stress.” He walked over to the door, looked at Ken,
then glanced away. “You seem to have a new boyfriend. Cute guy.”
He frowned. “My
mother fixed us up.”
“Seriously?” Jim
snorted a laugh.
“You, my friend,
are not Japanese, or you’d understand.”
“You were born in
Japan?” Ken had no accent at all.
“No, I was born
in Costa Mesa, but—well, it’s complicated. So don’t worry about your heart. My
office manager is gone, but she’ll call you to make an appointment in about two
months. Meanwhile, I’m serious about contacting me if anything unusual occurs.”
“Anything?”
“With your
health, crazy man.” He smiled, and this time it reached his eyes.
Two months. He
had no excuse to see Ken Tanaka for two months. Hell, that was good news. Maybe
he’d get his feet back under him, if he didn’t die of a heart attack first.
“Thanks again for
helping me with the architect thing.”
Ken raised an
eyebrow. “Is it working out with Willings?”
“Yeah. He
assigned one of the young guys in his office to handle the drawings, and he’s
great. He’s really saved my ass.”
“Good. See, I
helped relieve your stress.” He sounded sad.
“Yeah.” He stuck
out his hand. Ken took it, and heat traveled up Jim’s arm all the way to his
heart. “Guess I’ll see you in two months.”
“Yes.”
“Don’t marry any
guys you don’t want to marry.” He tried to grin.
Ken didn’t grin.
“I’ll try.” 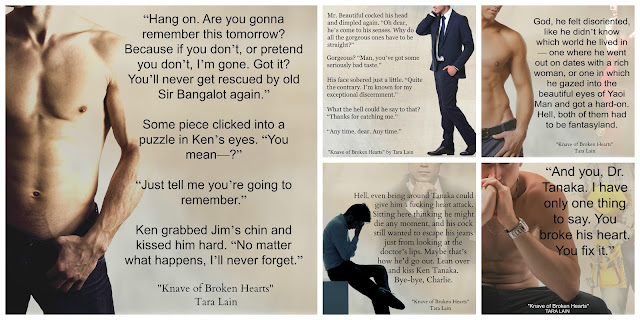 Tara Lain writes the Beautiful Boys of Romance in LGBT erotic romance novels that star her unique, charismatic heroes. Her first novel was published in January of 2011 and she’s now somewhere around book 23. Her best­selling novels have garnered awards for Best Series, Best Contemporary Romance, Best Ménage, Best LGBT Romance, Best Gay Characters, and Tara has been named Best Writer of the Year in the LRC Awards. In her other job, Tara owns an advertising and public relations firm. She often does workshops on both author promotion and writing craft.
She lives with her soul­mate husband and her soul­mate dog in Laguna Beach, California, a pretty seaside town where she sets a lot of her books. Passionate about diversity, justice, and new experiences, Tara says on her tombstone it will say “Yes”!
You can find Tara at