Thanks so much for stopping by to read my review of Knit Tight by Annabeth Albert.  Knit Tight is book 4 in the Portland Heat series but each book can be read as a standalone.  This is a sweet romance with very unique characters who are trying to cobble together their own version of family while their lives are in a bit of chaos.

I received one copy of this book at no charge in exchange for my honest review and this post contains affiliate links. 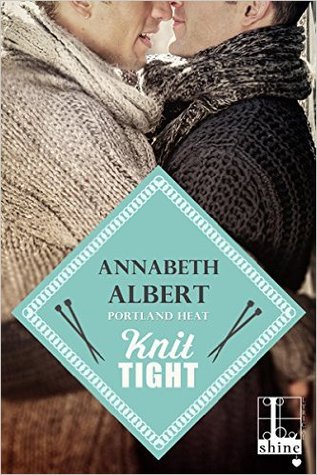 One of Portland’s hottest young baristas, Brady is famous for his java-topping flair, turning a regular cup of joe into a work of art. Every Wednesday—aka “Knit Night”—hordes of women and their needles descend on the coffeehouse, and Brady’s feeling the heat. Into the fray walks a tall, dark, and distractingly handsome stranger from New York. His name is Evren, and he’s the sexy nephew of Brady’s sweetest customer, the owner of the yarn shop down the street. He’s also got a killer smile, confident air, and masculine charm that’s tying Brady’s stomach in knots. The smitten barista can’t wait to see him at the next week’s gathering. But when he tries to ask Evren out, his plans unravel faster than an unfinished edge. If Brady hopes to warm up more than Evren’s coffee, he’ll have to find a way to untangle their feelings, get out of the friend zone, and form a close-knit bond that’s bound to last a lifetime…

Brady is a young and energetic barista with a lot on his plate.  His parents died 2 years ago, leaving him in charge of his 4 siblings.  He is struggling to make ends meat and raise them the way he knows his mom would want them raised.  He loves his job as a barista, though, and the coffee shop is popular with the local knitting group.  Knit Night has become a popular event in the cafe and when a tall, dark and sexy man joins them one night, Brady takes notice.

Evren is the nephew of one of the knit night ladies.  Mira, his aunt, has been diagnosed with cancer and he leaves his up and coming NY fashion design job to take care of her.  He is handsome and confident but a bit particular when it comes to partners, sex and getting involved in general. He tries to stay uninterested in Brady but slowly their friendship turns into a close-knit bond that teaches both of them that it is okay to lean on someone else for support occasionally.

I am a huge fan of Annabeth Albert’s work but while the writing was stellar as usual, Knit Tight just didn’t grab me for some reason like the other books did.  Mostly because I really didn’t like Evren all that much.  I know it was probably his Turkish background and being raised in a conservative family but I thought he was too abrupt and way too fastidious for my liking.  He was downright rude to Brady when he first found out he was bisexual and not gay. He had a bad history with bisexual men which left him uninterested in dating another one.  And he was a bit weird about sex.  I get that not all guys are into the same things (and I won’t spoil the story by giving away his quirks) but suffice it to say that there was a distinct lack of nakedness for most of the story and I just didn’t really feel the chemistry between them too much.  He has some serious communication problems and I think his hot and cold attitude confused the heck out of Brady.

Now, Brady I really loved.  He had so much on his plate it was overwhelming and you could really feel it.  His frustration with raising his siblings was palpable but so was the love he felt for all of them.  He was thrilled to have Ev take charge occasionally so he could just let go and not think for a while.

These two characters are both incredibly unique but I think more focus was placed on their lives than on them personally.  I cried over Mira’s story…there was a bit of sadness cast over most of the story as you watched her illness unfold.  I didn’t really get enough ‘up moments’ to counteract the serious ones.

Overall, Knit Tight by Annabeth Albert is incredibly well written.  I loved the unique main characters and the secondary characters were also very well developed.  The tidbits about yarn and knitting were enjoyable and I really enjoyed the Evren’s Yarnings that started each chapter.  But, I wish there had been more focus on the  relationship between the main characters to balance out the rest of the story.