Letters from a Cowboy by Sue Brown is a touching yet sad look at two gay cowboys falling in love in an era where such a thing was enough to get you killed.  I received one copy of this book at no charge in exchange for my honest review.  All opinions are my own and this post contains affiliate links. Please keep reading for more about the book, the author, and enter the contest at the end of the post! 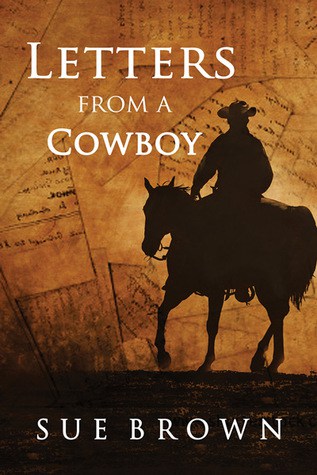 Title: Letters From A Cowboy
Series: Morning Report
Author: Sue Brown
Publisher: Dreamspinner Press
Cover Artist: Garrett Leigh
Length: 154 Pages
Release Date: 10 June, 2015
Blurb: A Morning Report Story
Simon Wood arrives at Tamar Ranch looking for a job
after being fired from his last position for seducing the boss’s son. It
doesn’t take much for him to prove his skills with horses, so he’s taken on,
but soon he clashes hard with Chip Henson.
The animosity between them hides something very
different, but not for long. No matter how hard they try to resist their
attraction, eventually they give in to their need. They start leaving notes for each other, and others notice and warn them to be more careful.
Fearful of discovery, Simon leaves Tamar Ranch to save Chip’s job. When he learns that his departure sent Chip off the rails, he knows he needs to risk everything and go back for him.

Woody comes from a poor and relatively harsh upbringing and spent time in the military just to get away from it.  Now that he’s out of the service, he just wants to work hard as a cowboy and earn a simple living.  He keeps his trysts with men to bathroom flings until he gets involved with the bosses’ son on his current ranch.  Knowing it’s time for him to leave, he heads out and finds himself on Tamar ranch.

Chip comes from a rather well off family but he had no use for college.  Wide open spaces and hard work were all he ever wanted.  Until he fell for Woody. He and Woody are drawn to each other from the beginning and people begin noticing.  When Woody leaves to protect Chip, the whole situation becomes unbearable.  Between hiding who they are and protecting the ranch from unscrupulous criminals, Chip and Woody begin to feel like they will never have their happily ever after.

I loved the way this story was written. Woody’s character was a simple man but both intelligent and hard working.  He was the realist in the relationship.  Sure, he would have loved to scream his love from the barn roof but was smart enough to realize that wasn’t the most intelligent thing to do.

Chip was a bit less rational. He was frustrated over his inability to simply BE with Woody the way he really wanted to be. His meltdown when Woody left was childish and immature but it fit with his character. I admit I wasn’t all that impressed with his character but I understood where he was coming from.

The details that went into setting the scene of this book really brought it to life.  You could almost taste the dust and smell the cows as you read the book.  Sue Brown is an amazing story teller and she did a great job portraying what ranching was like in the middle of a Texas drought.  Or at least what I ASSUME it would be like.

I was torn over how the ending was presented.  I don’t want to give away any spoilers but just when I thought there would be several more chapters to read, the book ends and we fast forward many years to an epilogue.  I felt like I missed the happily ever after, although it is there at the end.  Interesting way to end the story but I admit I wanted to read about those years in the middle!

HE WAITED an hour by the mill before Chip showed.
The cowboy slid off his horse and into Simon’s waiting arms, his hat tumbling
off his head as Simon held on to him tightly. Simon pulled him into the shadow
of the mill, pleased that he could finally bury his chilly face in Chip’s neck,
his nostrils full of the strong, rich scent of his man. 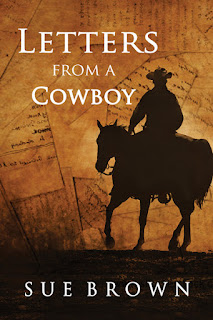 “I thought you weren’t coming,” he managed
eventually. “Didn’t know if you’d get my note.”
“I nearly didn’t,” Chip said. “Lorne and Brad
were waiting for me with rifles before I left.”
“How did you get away?”
“Lofty and I jumped them and knocked ’em both out
before they could shoot me.”
Chip shuddered with the emotion, and Simon hung
on even tighter, aware of just how close he’d come to losing him.
“I love you, Henson,” Simon said gruffly, feeling
Chip dig his fingers almost painfully into Simon’s back. Simon relished the
pain. It reminded him they were both still alive.
“Love you too, Woody.”
Simon huffed into Chip’s neck at the nickname.
“Next time we go together.”
Chip pulled back to look at him. “Don’t be stupid.
We can’t take that risk.”
“I’m not leaving you again,” Simon insisted
stubbornly.
Chip stepped back and slid his hands down Simon’s
shoulders to grasp him around the upper arms. “Don’t, Simon. You know we can’t
risk anyone finding out about us. I only just escaped this time. Next time it
could be you, and I can’t have that.”
Simon stared at Chip, seeing the lines around his
brown eyes, carved deeper into Chip’s face in the year he’d known him. “And I’m
not gonna to spend my life wondering if you’re goin’ to turn up. We can’t be
together as lovers, but we can be together as friends.”
“What are you saying?”

“If keeping us safe means we stop fucking,
then….”

Chip pressed his lips together, then gave a short
nod. “Friends.”

Simon went to step away, but somehow he ended up
with his mouth mashed against Chip’s, his hands tangled in Chip’s hair, and
Chip’s erection a rigid line pressing into his hip.

The throaty noises Chip made as they kissed just
ramped up his excitement.

Simon growled deep in his throat and pushed Chip
against the mill wall. “Fuck, I’ve missed you so much.”

“Missed you too.” Chip hauled Simon down to kiss
him again.

“Ya got spit.” Chip’s hands were busy at Simon’s
flies.

“Don’t care, not now. Just want you.” Chip turned
in Simon’s arms and placed his hands against the rough wall.

Simon pulled Chip’s ass toward him, bare and
beautiful, and all his. He ran his work-roughened hand over the tight asscheek.
“You’re so fucking beautiful.”

Chip laughed roughly. “You need to see the doc,
Woody. I ain’t beautiful.”

“You are to me. You’ll always be more beautiful
than any of them painted whores in the Drink.”

“Thanks, I think.” Chip gasped as Simon spat on
his fingers. “Hurry.”

Simon held Chip’s shoulder and slowly worked his
fingers into Chip’s ass. “Just you wait. I’m not gonna hurt you.” He withdrew
his fingers and spat on them again. He worked Chip until he was as prepared as
he could get him.

Chip smacked the wall as Simon pushed in.

God, he was so tight. Simon wanted to ram in
until he couldn’t go any farther, but he wouldn’t hurt Chip. “Too much?”

Chip might not, but Simon felt he was about to
fly apart at the seams. He sank into Chip’s heat until he could rest against
Chip’s back. He breathed across Chip’s ear, feeling the man shiver.

“That’s all I needed to hear.”
Simon needed to move, but for a moment he just wanted
to stay exactly where he was, Chip’s body tight around him and Simon’s senses
full of his man.

Sue Brown is owned by her dog and two children. When she isn’t following their orders, she can be found plotting at
her laptop. In fact she hides so she can plot and has gotten expert at ignoring the orders.Sue discovered M/M erotica at the time she woke up to find two men kissing on her favorite television series. The series was boring; the kissing was not. She may be late to the party, but she’s made up for it since, writing fan fiction until she was brave enough to venture out into the world of original fiction.
AUTHOR LINKS
Facebook: https://www.facebook.com/suebrownstories
Facebook Page: https://www.facebook.com/SueBrownsStories
Twitter: https://twitter.com/suebrownstories
Google+: https://plus.google.com/+SueBrownstories/
Blog: http://suebrownsstories.blogspot.co.uk/
Website: http://www.suebrownstories.com/

Get a chance to win two signed paperbacks of ‘Letters From A Cowboy’ or a package of Morning Report stories!