Thank you so much for  taking the time to read today’s review.  In Life is a Stevie Wonder Song by V.L. Locey, best-selling author Stephen Ramsey has lost his muse.  In an attempt to find her, he heads to a summer writing camp in the middle of nowhere.  He not only discovers his muse, but something even more precious.

Life is a Stevie Wonder Song by V.L. Locey 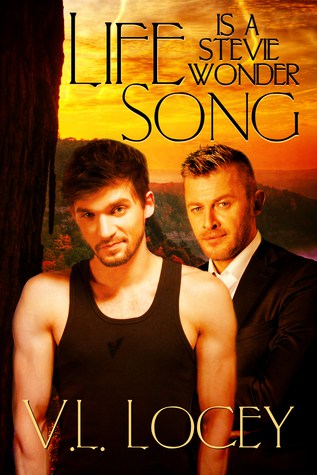 About the Author:  Find out more about V.L. Locey by visiting the author’s website. You can also check out their profile on Goodreads or follow on Facebook or Twitter.  Read my author interview with V.L. Locey to learn more!

Authors know that their muse is a fickle creature. Best-selling spy novelist Stephen Ramsey has been in a hate-hate relationship with his inspiration for months. When Stephen’s publisher lays a legal ultimatum upon him, with a rapidly approaching deadline, he knows he must do something to kick-start his creativity or face the unemployment line. His daughter comes up with a possible answer: a summer camp for the creative soul. With nothing to lose, Stephen packs up his laptop, phonograph and beloved record albums and heads from Greenwich Village to the Catskill Mountains.

There, among a horde of college students attending for extra credits, is Declan Pomeroy, a photographer of fey creatures who is twenty-two years younger than Stephen. The woods are a magical place, and he quickly finds himself falling under the spell of the free-spirited photographer. Confusion wars with desire inside Stephen as he succumbs to the feelings welling up inside. But, sadly, summer camp always has to end. Can a man who has just found himself really leave the person that makes his heart sing?

Let me start off by saying that the only reason I took off major points on this review is because I don’t think the story and characters really fit as a novella.  There was so much more to Stephen and Declan’s relationship that I felt needed to be developed.  I loved both of these characters and neither of them was perfect.  Their quirks and flaws made them incredibly unique.

Let’s start with the setting and writing style. The author did an amazing job of setting the scene and you could almost feel the humidity and hear the guys splashing in the lake.  You could really close your eyes and pretend you were in a tiny little bungalow in the middle of nowhere.  The setting of the writing camp sounded incredibly serene, although I really wanted to see the characters get more involved in what the camp offered them in terms of creative development.  I felt that Stephen really just paid a lot of money for a cabin in the woods and it was so much more than that.

I loved both of the main characters in Life is a Stevie Wonder Song, although they had their own flaws.  Stephen was a bit lackluster about life in general and looking for new inspiration.  I think he found it in Declan, although his acceptance of his bisexuality seemed a bit easy.  40 something and married 3 times, I would  have expected a bit more of a freakout, honestly.  Declan was wonderful…free spirited and happy go lucky.  However, incredibly immature at times, too.  And, if I had to guess at the end of the story, I would not put this as a long term relationship.  Only because he apparently needs to be number one front and center in Stephen’s eyes and that just isn’t very realistic and is a fairly immature attitude.  I think I would have liked to see him grow up a bit as the story moved along.  A confident and more mature Declan at the end of the story would be a better life long partner to a middle-aged writer with a deadline. Since you only get Stephen’s point of view in the book, it was hard to connect with Declan through most of the story.

The author created some beautiful imagery and captivating characters in this novella.  I think if it were longer, I would have really loved every moment of it.  These two guys, though, needed a bit more time for their relationship to develop to really make it perfect for me.