Life, Some Assembly Required by Kaje Harper is a continuation of Ryan and John’s new lives as partners after The Rebuilding Year ends. It picks up in the exact same spot we left the couple in the previous book and you really need to read book one to understand this one!  I received a copy of this book through Net Galley in exchange for my honest opinion.  This post contains affiliate links. 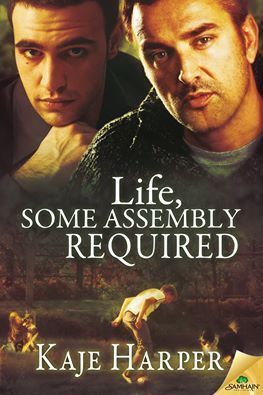 After spending the first part of his life chasing pretty girls, love has finally come to Ryan in the form of John, a tall, lanky, red-headed landscape architect with wide shoulders and a five-o’clock shadow.

For the first time in his life, love feels easy. Hell, he even ran into a burning building for John and his son, and he’d do it again if he had to. But telling his father and brothers “I’m gay. I’ve met a man”? That’s a bumpy ride he’s not looking forward to.

For John, loving Ryan is as natural as breathing. Now if only the rest of his life would fall into place. Dealing with his teen son is complicated enough, but with his ex-wife causing trouble and his daughter wanting to move in, John’s house—and his relationship with Ryan—threaten to split at the seams.

Would one month without a new surprise knocking him upside the heart be asking too much? If the sound of Fate’s laughter is any indication, the answer must be yes…

Life, Some Assembly Required is a family drama that picks up where The Rebuilding Year left off.  Ryan, John and Mark are recovering after a devastating fire that leaves them all a bit freaked out.  Tory, Johns’ teenage daughter, is having a whole bunch of angst and stress over her life in California.  John’s ex wife makes a reappearance in their lives and causes massive upheaval that they aren’t sure how to survive.  Ryan is pulled between family, love, and medical school and the stress is starting to show.  All these two guys really want is to settle down together, love each other, and enjoy life but there are an awful lot of obstacles to overcome first.

I enjoyed Life, Some Assembly Required, however I think there was a real struggle in the balance between highlighting Ryan and John’s relationship and focusing on the drama of the rest of the family.  Ryan and John are happy and wildly in love.  The drama throughout the story comes from assorted family members. And, to be honest, I really didn’t like how either guy handled it.

John is an incredibly nice guy…so nice that nothing ever really rocks his boat.  He just goes along for the ride throughout most of the story.  He lets his ex wife steamroll him for most of the book, although I did feel bad for her situation.  It took all the way to the end of the story for John to finally stick up for himself and his relationship with Ryan.  I just felt he had turned into a bit of a door mat in this book.

I liked Ryan’s character in Life, Some Assembly Required more than John’s.  Ryan’s coming out didn’t go all that smoothly with his father and brother. Between the stress of his coming out, Cynthia’s interference, and medical school, he really has a lot going on.  I think he was incredibly patient with his own family and putting up with John and Cynthia.  Maybe even a little too patient.  Telling a few people off might have gotten results faster than patience.

This is an incredibly well written book and it was nice to see how things are moving along with this family.  However, I really would have preferred more ‘John and Ryan’ and less ‘family drama’.  If there is a book three to this series, I would love to see more of their relationship and less stress from outside sources.