Lights, Camera, Cupid!: A Bluewater Bay Valentine’s Day Anthology is a collection of Valentine’s Day romances from some amazing M/M romance authors. Cupid is visiting Bluewater Bay, and he’s leaving chaos in his wake! I received one copy of this book at no charge from the publisher in exchange for my honest review.  All opinions are my own and this post contains affiliate links. 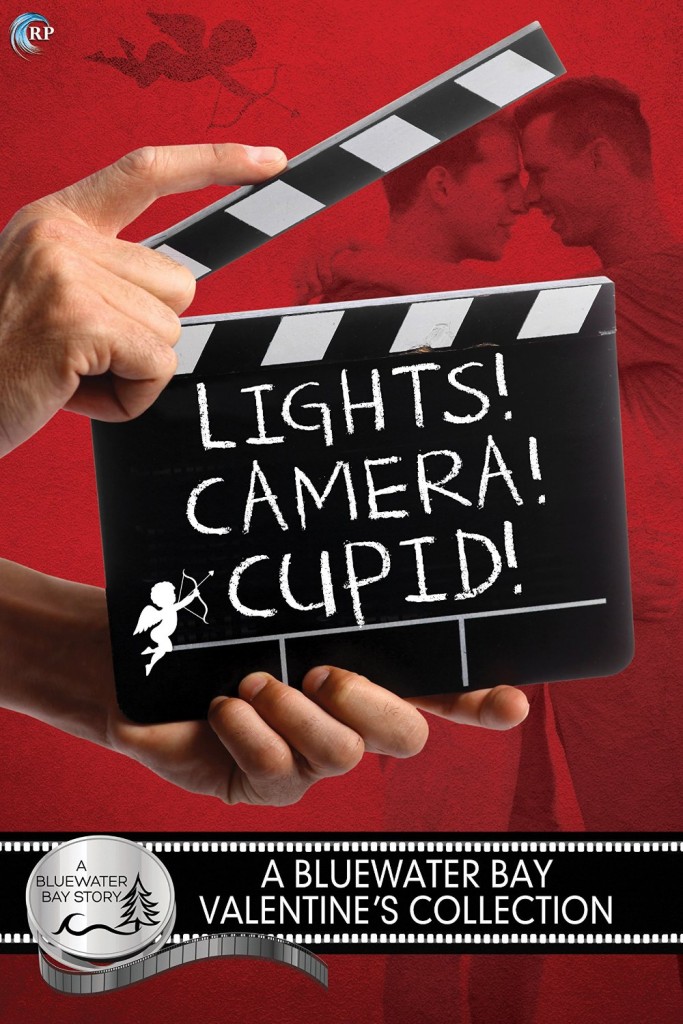 In L.A. Witt’s Just Another Day, beloved actors Levi Pritchard and Carter Samuels have an announcement for their fans, while in Z.A. Maxfield’s I’ll Be There, actor Spencer Kepler and his boyfriend Nash Holly brave a blizzard and a fan convention to spend their first February the 14th together.

Of course, it’s not just TV stars celebrating the day. In Anne Tenino’s Helping Hand, an aspiring artist eager to escape Bluewater Bay decides he just might have a reason to stay: lust-inspiring logger Gabriel Savage. In SE Jakes’s No Easy Way, a local teacher reconnects with an old lover working security on the film set. And in Amy Lane’s Nascha, a Bluewater Bay elder recalls how his own unconventional family used to celebrate the holiday.

Real life may be nothing like TV, but when Cupid comes to town, there’s plenty of romance and drama to go around.

I have read several of the Bluewater Bay books and most of the stories in this anthology can be read as stand alone novels.  However,  L.A. Witt’s Just Another Day and Z.A. Maxfield’s I’ll Be There, are follow-ups to books 1 and 3 in the Bluewater Bay series, respectively.

This is a sweet, sexy and romantic followup to Starstruck.  Levi detests Valentine’s Day and thought he made it very clear to Carter that he had no interest in celebrating it.  But, Carter wants to do something sweet for the guy he loves and even though he tries to be nonchalant about his ‘celebration’, Levi sees through the whole thing.  However, Carter’s anger at the rejection makes him realize that maybe Valentine’s Day can be a special holiday after all.  There is steamy makeup sex, a romantic gesture on Levi’s part and everyone lives happily ever after.  A cute followup with a realistic story line!

This story is all about Nash  trying to get to Spencer to make Valentine’s Day romantic.  Unfortunately, most of the story is told with them apart from one another which made it hard for me to really get into.  The trip to see Spencer is fraught with difficulties due to a raging snow storm.  There are moments of panic, overwhelming love and a need to be together and some self realization as the story progresses.  However, I would have liked the characters themselves to spend more time together to develop the ‘romance’ part of the romance book.

This is a coming of age and coming out of the closet story. Lucas is a high school senior and talented artist.  Gabe is a logger, Lucas’s older brother’s best friend and is bisexual (although no one knows that).  Lucas wants to get out of town and gets a scholarship to an art school.  He has a huge falling out with his family, ending with his announcement of being gay.  His family freaks out, although eventually comes around.  He and Gabe have a hot and sexy interaction, but their situation (relationship?) is left very unfinished.  I hope this will be resolved in another book?  Didn’t really like where this one ended!  Likeable characters, though, and I think they have potential.

There is a LOT of history between these two characters, a fair amount of angst, some steamy sex and a bit of drama.  It was a lot to take in for a short story but it was an enjoyable read.  I definitely think it would have fit better as a longer story where we could really get into each of the characters heads a bit deeper.

While I generally love Amy Lane, I am not sure this story fit in with the others in the anthology.  Nascha is an elderly Native American who is reflecting back on his past….it is told with a few switches back an forth to past and present times.  He was deeply in love with two people in the past (Raw and Kitty) and they had a wonderful relationship. He was forced to give them up when he took in his sister’s orphaned daughter.  He lives a rather sad and lonely life as she grows up, visiting Raw and Kitty whenever he can but no longer in an actual relationship with them.  When his daughter is off to college, he moves back in with them but a crisis or two erupts which forces them back apart again.  There is a sortof happily ever after but it is definitely a bit of a deep and slightly depressing read.  While I thought the story line was unique and really liked the characters Ms. Lane created, it was a little too heavy to fit in with the other stories and left me rather sad.

According to the information I found, this book  is a prequel to Amy Lane’s full-length Bluewater Bay novel coming out in June, which focuses on Cal, the grandnephew of Nascha.

Overall, the books in this anthology were not too bad, given the short nature of the books and the difficulties that presents.  I would like to see a few of these characters in full length novels.