In Love On Life Support by John Charles we meet Mathew, a paramedic, and Trent who is an ER doctor.  Between their chaotic jobs, two small children, and some homophobic hatred from a family member, it’s tough for them to find time to connect.  Keep reading to learn more about these two guys and how they manage to make time for a relationship. 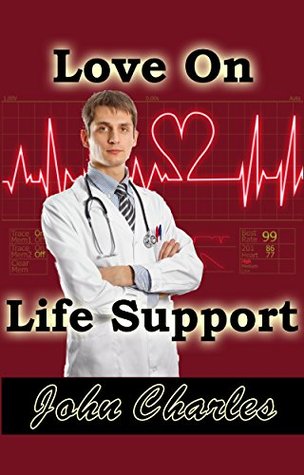 About the Author:  Learn more about John Charles by checking out the author’s website.

Matthew Kailen has two rules:
1. I don’t date guys from work.
2. I don’t do relationships.

A respected paramedic and the son of a homophobic father, Matthew learned to stay deeply entrenched in the closet for his own protection. He remained under his father’s radar until his sister Meredith and her husband were killed by a drunk driver. When Matthew became the guardian of their two young children, his life got complicated.

Trent Paleck completed his residency in Emergency Medicine at Lake Community Hospital outside of L.A. Despite the abundance of hot surfers and muscle studs, he longed to get back to the east coast. When a position for an Emergency Room doctor became available at Amity Hospital, in Trent’s home town, he jumped at the opportunity to move home.

Trent never expected to find what he did, when he found himself working alongside Matthew. A reluctant attraction quickly blossoms into something deeper. Can Matthew find in Trent the one thing that will cause him to break his own rules? Is Trent ready to trade in California surfers for the father of two young children? Both men are faced with what appears to be insurmountable challenges when Matthew’s father takes actions to prevent Trent from having the man he wants and Matthew the children he loves. Can they climb over the hurdles to find the love they desire?

In Love On Life Support by John Charles, Mathew grew up in a household where he knew it wasn’t acceptable or safe to be gay.  He kept things under wrap long enough to get a degree and a job as a paramedic.  A freak accident leaves him the sole caretaker of his niece and nephew, a fact that his homophobic father hates with a passion.  Matthew works hard and has no interest in forming a serious relationship when he has so many commitments already.

Trent has come back to town as an ER doctor.  He and Matthew knew each other in passing in high school and Trent is eager to get to know him again.  Preferably without clothes.  He soon realizes that there is more to Matthew than just a sexy paramedic.  The two slowly start to explore a relationship with each other but there are a few hurdles in the way of their happily ever after.

While I liked the premise of this story and the characters and background of each of them, the writing itself was a bit choppy and rushed.  It felt like most of the story was being TOLD rather than SHOWN.  I think some slightly more creative writing would have built a better storyline and drawn me into the actual relationship.

Matthew has priorities other than a relationship which is totally understandable.  He gets annoyed at Trent’s pushy behavior but decides to give him a shot.  The story had that one thing that really drives me nuts, though.  Instant attraction (ie getting hard the moment you lay eyes on a person for the first time) and a rushed emotional connection.  I think Matthew was already saying his heart was involved the first time they went on a date.  I really prefer a bit more character development and interaction before they start proclaiming their love for each other.

Mathew’s father was a jerk but it felt a bit over the top.  I’m sure there are some seriously homophobic people out there but his behavior just seemed forced to create more tension.  I think the tension and point of the story could have been made without quite as much yelling. Sometimes it’s the quiet ones you should fear most!

Trent seemed like a good guy and it’s nice that he wasn’t put off my Matthew’s kids.  He is very comfortable with who he is and never once had to worry about being accepted when he came out in high school. Their physical relationship is rushed, and each time they are together I felt like it should have been MORE.  I don’t need pages and pages of sex but the interaction should last more than just a paragraph.  I think a slower pace would have done wonders to really portray their attraction.

Overall, I like the premise of Love On Life Support by John Charles and the characters that the author creates.  It definitely needs some editing for spelling and grammatical errors, as well as just polishing up the rough edges to create a smooth flowing story.