In More Than a Friend by Nic Starr, Tim is newly single and interested in his best friend’s brother. But is a possible relationship with Scott worth risking his oldest friendship for? I received one copy of this book at no charge in exchange for my honest reviews but all opinions expressed here are my own.  This post contains affiliate links.

More Than a Friend by Nic Starr 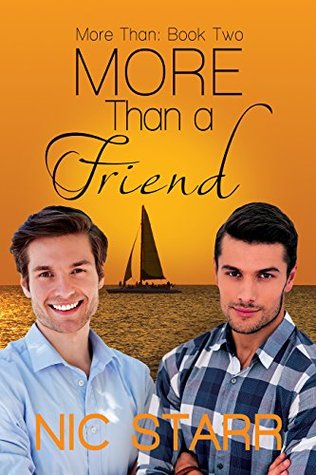 Book Blurb:  Tim Walker is a free man. He’s broken up with his girlfriend and is ready to move on to a new relationship. But the relationship he wants to pursue is fraught with challenges. Firstly, Scott Richardson is a man, and only Tim’s closest friends know Tim’s bisexual. Secondly, everyone knows Scott relishes the single life. And then there’s the big one: Scott is the younger brother of Tim’s best friend, Paul.

Scott can’t deny an attraction to his brother’s friend Tim. Lean, dark blond, and blue-eyed, Tim is hot and hard not to notice—especially since Scott and Tim work together. Too bad the man is straight, and too bad Scott worries how Paul will react if Scott hooks up with his best friend.

Tim and Scott want to see if there’s a chance for more than friendship between them, but neither of them wants to lose Paul. Together, they must find the courage to follow their hearts and find a way to have it all.

As More Than a Friend by Nic Starr begins, we meet Tim who has just broken up with his girlfriend.  He is totally okay with this life decision and tired of reassuring his friends that he is doing perfectly fine.  What he really wants is to just move on with life.  He is busy as a caterer for Poppy’s Pantry and has his eye on someone he is interested in getting to know better.  Too bad that someone happens to be Scott, his best friend’s younger brother.  Only a few people know that he is actually Bi and not totally straight and he isn’t quite sure how to make his interest known.

Scott is definitely attracted to Tim but has always assumed the guy was straight.  And when they finally realize there is something more than friendship between them, they want to be cautious.  Scott’s older brother Paul is Tim’s best friend and a romance may just throw a wrench in the whole friendship/family dynamic.  Scott seems to be at a point in life where he is interested in more than a one night stand but not sure Tim is the right guy to jump into a relationship with.

Since Scott and Tim have known each other for quite a while, there isn’t a giant flareup of instantaneous attraction between them.  During their first interactions I sensed camaraderie rather than romance.  It took a while for them to admit to their attraction and when they finally did give into it, the situation felt totally natural.  It was a slow ‘friends to lovers’ buildup of the relationship that was very realistic.

There are a fair number of characters in this story to keep track of and you will definitely want to read book one (More Than a Superstar) before you read this one.  While the story lines are independent, they feature a lot of the same people.

Tim and Scott are both genuinely nice characters and there is no major angst between them.  They are both hardworking, loyal, and enjoy spending time with friends.  There is a nice amount of chemistry between them when they finally get together and thankfully their worry over Paul’s reaction was unnecessary.

More Than a Friend by Nic Starr is an enjoyable novella with guys who follow their hearts to achieve a beautiful future together.