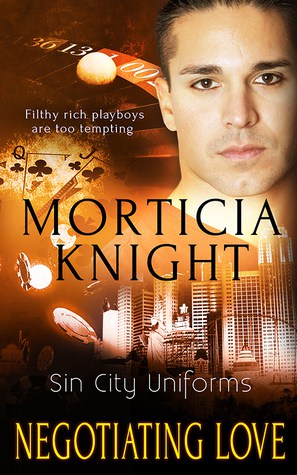 Can the kinky billionaire owner of Dark Fantasy Resort Casino capture the heart of a muscled SWAT officer with a secret fetish?

SWAT Team Hostage Negotiator, Steve, wonders why he can’t stay away from the spoiled rich Allistair, owner of Dark Fantasy Resort Casino. They have mutual kinks – ones Steve can’t find with other lovers—but there’s something else about the emotionally detached, beautiful man that calls to him.

Billionaire Allistair stays alone in his luxury penthouse apartment at the top of Dark Fantasy, terrified of the real world and of opening himself up to genuine emotions. He takes lover after lover, all of them allowing him to do whatever he wants to their bodies, in the hopes that they can scam something from him.

One night is all he ever shares with a plaything—he knows they only want the money and luxury he can offer them and nothing more. But the down to earth Steve is different. They share the same kinks and are explosive when together. But could the muscled law officer ever want more than the lust-filled encounters that have become such an addiction?

As they grow closer, they discover they also have to find a balance between Steve’s everyday world and Allistair’s entitled world before they can truly find an ever after. They also have to make sure Allistair stays safe. Filthy rich playboys are too tempting to those who seek the ultimate payday—and who aren’t afraid of hurting someone to get it.

Steve sighed with relief as Allistair sat on the sofa. It seemed as if he was keeping enough of a distance from Steve so as to reinforce that what they were doing at that moment was not meant to be sexual. The change in dynamic had him more than a little unsettled.

“To the fates.” Allistair held up his glass, which Steve knew would contain a very expensive Scotch, neat.

Huh. I guess I remembered too.

Steve dipped his chin then clinked his glass with Allistair’s. The expression on Allistair’s face was similar to his typical bemused detachment, but there was a hint of something else in his gaze—excitement perhaps. There was a flush on his cheeks that Steve didn’t recall from before, and his lips were slightly parted as if in anticipation of something. All his years of paying attention to small nuances for his profession could be a blessing and a curse. He wanted to let go, not think—just feel. Instead, he was analyzing his would-be lover for the evening.

Allistair closed his eyes, and Steve watched his Adam’s apple bob up and down as he swallowed the liquor. When Allistair lifted his lids again, he stared at him as if he was seeing right through him. He felt exposed, vulnerable. As nasty as they’d been with each other, he was more laid bare than he’d ever been with Allistair.

“I was concerned you’d decided not to come back to my little club.”

Steve blinked a few times, trying to wrap his brain around Allistair’s statement. His prior interludes with him had indicated that he didn’t give a shit whether he ever saw Steve again.

Allistair lifted the one eyebrow again. “I imagine with someone as delectable as you there’s been quite a bit of ‘so on’. I might be the teeniest bit jealous.”

His plan of keeping his expressions neutral was becoming more of a challenge as Allistair’s comments became more perplexing.

“What are we doing here, Allistair? Is this a new game?” 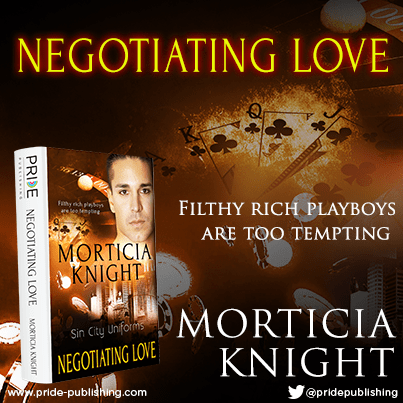 Morticia Knight spends most of her nights writing about men loving men forever after.

If there happens to be some friendly bondage or floggings involved, she doesn’t begrudge her characters whatever their filthy little heart’s desire. Even though she’s been crafting her naughty tales for more years than she’d like to share – her adventures as a published author began in 2011.

Once upon a time she was the lead singer in an indie rock band that toured the West Coast and charted on U.S. college radio. She currently resides on the northern Oregon coast and when she’s not fantasizing about hot men she takes walks along the ocean and annoys the local Karaoke bar patrons.