Looking for new gay romance authors? In Controlled Burn by Erin McLellan, Joel must figure out if he’ll allow his grief to rule him, or if his connection with Paulie is worth letting all of his walls come tumbling down.  I received one copy of this book at no charge in exchange for my honest reviews but all opinions expressed here are my own. 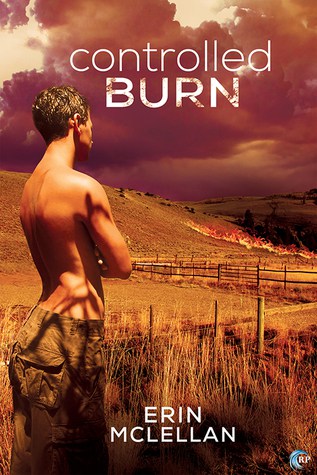 At eighteen, Joel Smith’s life fell to pieces. His boyfriend died in a car crash while reading a sext from him, the local newspaper outed them both in the aftermath, and his parents got a divorce. Joel did everything possible to outrun his past: he moved to Oklahoma for college, legally changed his name, and started over.

Since then, he hasn’t let anyone get close—not his classmates, not his roommate, and definitely not his hookups. The strategy has served him well for over three years. Why would he change it now?

But Joel doesn’t plan on the articles about his boyfriend’s death being used as a case study in one of his classes. And he doesn’t plan on Paulie McPherson, who is sweet and giving and fun. In Paulie, he finds a home for the first time in years.

But love isn’t simple, and lies have a tendency to get in the way. Joel must figure out if he’ll allow his grief to rule him, or if his connection with Paulie is worth letting all of his walls come tumbling down.

If you are looking for new gay romance authors, Controlled Burn is the debut novel of Erin McLellan and it is a very strong first novel.  This is a very heavy, angst filled book.  Be aware of that before you start reading. If you want light and fluffy, this book isn’t a good choice.

Joel has a rough past that he is trying to hide from.  His high school boyfriend died in a car accident when he glanced down to read a sext from Joel while driving home.  As a result, Joel was outed, ostracized, and emotionally scarred all at once.  He escapes to college, changes his name, and proceeds to sleep his way through half the college.  He is emotionally stunted, terrified to tell anyone about his past, and absolutely incapable of connecting to anyone.

Paulie had a rather difficult childhood.  As a child of a ‘quiver-full’ family, his sexuality was definitely NOT acceptable.  He left to live with an estranged aunt and learned how to love himself.  Paulie is out and proud and slightly femme but not over the top.  He seems to be totally in charge of his life but family issues still create angst and emotional instability.

Basically, the plot is watching these two characters try to overcome the emotional crap in their past so they can have a happily ever after.  I struggled with it a bit.  Even once Paulie and Joel get really close, Joel doesn’t say a single thing to Paulie about his past.  Even after Paulie opened up and spilled so much about his childhood, Joel just stayed silent about his past trauma.  I understand not telling total strangers but I would have thought that Joel would have said something to Paulie.  It started grating on my nerves after a while and I just wanted to get to the point in the book where he finally came clean.

Paulie and Joel are friends first and then move into lovers a bit into the book. The heat was perfect….not rushed, realistically hot, and just the right amount of dirty. Joel starts off the book using anonymous sex to try and drown out memories of his high school boyfriend.  It isn’t working so well.  When he finally gets together with Paulie, the fact that the sex is NOT anonymous is really hard for Joel to deal with.  There is a ton of emotional angst between these two guys and some of it will slip into their sex life. This has its pluses and minuses as the story moves along.

I have read some new gay romance authors who have bombed their first book.  Controlled Burn by Erin McLellan is an incredibly strong start!  While there was a LOT of angst, the characters were not overly dramatic.  There was a great balance of heat and emotion between them.  I will say that I liked Paulie a lot more than Joel…his confidence and sassy personality just grabbed me.  Whereas I just wanted to throttle  Joel for his stubborn refusal to open up about his past.

Definitely a story I recommend you read!